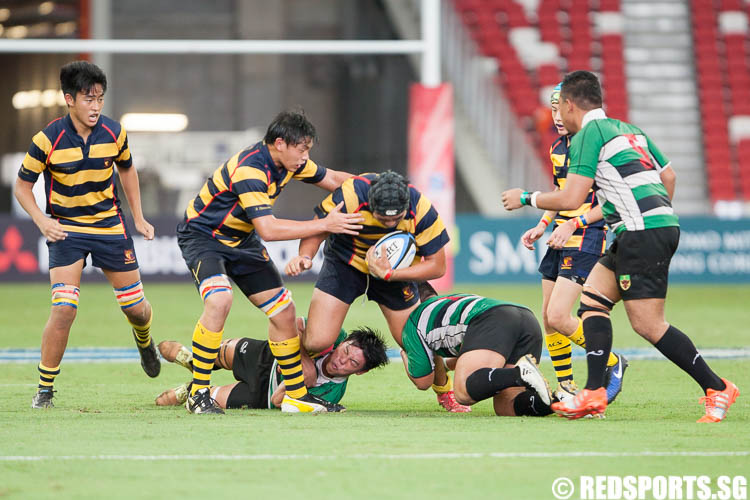 RI players in an attempt to defend against ACS(I). ACS(I) went on to beat RI 12-3 to clinch their fourth straight National A Division Rugby Championship. (Photo 1 © Rebekah Abbott/Red Sports)

National Stadium, Saturday, May 20, 2017 — In the first A Division Rugby Championship final to be played under National Stadium floodlights, Anglo-Chinese School (Independent) were eyeing their fourth title on the trot, while Raffles Institution (RI) were seeking their first title in seven years.

It was a rematch of last year’s final, where ACS(I) defeated their age-old rivals 36-3. When the two sides met earlier in the preliminary round, ACS(I) saw off the tie 33-7.

This time round, it was a cagier affair as the boys in red, blue and gold emerged 12-3 victors to claim their seventh title out of nine finals contested, since their inclusion in the A Division championship in 2007.

Said ACS(I) captain Joshua Lee (#7), “I think it was an amazing experience for us to be able to play at the Sports Hub. I know my (Year 5) juniors actually had that opportunity three years ago (in the C Division final), but it wasn’t as prestigious as this – they didn’t run through the tunnel, they didn’t experience everything that we experienced this time.

“I think we’re very blessed as a team, and I would just like to thank the Singapore Rugby Union and everyone who made this possible. This kind of exposure is a once in a lifetime opportunity, and I wouldn’t trade this for anything else.”

The nerves were apparent, as both sides were seemingly overawed by the occasion with a slow start to the game.

Their pressure was duly rewarded eight minutes in, with a dazzling solo try by Isaac Tan (ACS #3).

Seizing a loose RI pass, the Number Eight sprinted all the way down the left flank from the halfway line to draw first blood. From the tight angle, full-back Lim Shern (ACS #13) missed the conversion.

“It was an amazing feeling scoring the try,” said Isaac (ACS #3), who was playing in his first A Division final. “It all culminated from a team effort, in the plays leading up to that. When you’re at the Sports Hub, the location amplifies the cheers, everything is a lot louder. I think the cheers and support from the school family, alumni and parent supporters – they really helped to spur me on.”

The Rafflesians were not about to let up easily, and with their first foray into ACS(I)’s half, they earned a penalty. Full-back Ryan Leong (RI #15) did not fluff his lines, sending the ball through the posts to keep the scoreline delicately poised at 5-3.

But before RI could mount a comeback, ACS(I) capitalised on another of their opposition’s mistakes for their second try.

From an RI lineout on the right flank, ACS(I) intercepted possession. Several tackles and ensuing rucks later, the ball was passed down the line before hooker Benjamin Lim (ACS #16) managed to evade onrushing RI players and power himself over the try-line.

Scrum-half Matthew Robinson (ACS #16) converted his kick, as ACS(I) took a 12-3 lead going into the break.

RI approached the second half with more grit, carving out a few try-scoring opportunities including one in the dying minutes of the game. Alas, the score remained until the final whistle as RI’s wait for a first A Division rugby title since 2010 continues.

“I think we played very well, especially in the second half,” said RI captain Jeff Chen (#17). “In the first half I think everyone was just caught up playing in the National Stadium, we were just in awe.

“In the second half everyone picked up the tempo, we knew what we had to do, especially with the coaches’ guidance. I think we really showed fight, because it’s the last time our team was playing together as one, so we just wanted to give it our all for the last half an hour.”

RI coach Mark Lee saluted his team’s effort, and said it was a much improved performance from last year’s final.

“They were raring to go, but ACS capitalised on our mistakes and punished us good,” he said. “ACS started very well and played a high tempo game, but we were actually shutting them out and I was really proud of the courage that they displayed.

“It was a final, and whoever applies pressure and takes the opportunity makes a meal out of it. Fair play to ACS – it’s like football, you can shoot 20 times at goal, but when the other team has one chance and takes it, they win.”

In an exchange of graciousness, ACS(I) captain Joshua (#7) also gave credit to their rivals.

“RI definitely stepped up their game, kudos to them. No matter what the score was, they still gave it their all and I’m really impressed with how they played,” he said.

ACS(I)’s trophy adds to the B Division championship they won in March, setting them up for a ‘grand slam’ of A, B and C Division titles – a feat already achieved last year.

On ACS(I)’s ascendancy in schools rugby, Joshua (ACS #7) said, “We are blessed to have such a good coaching team and support group. The school support is really strong, and without them we really would not have been able to reach as far as we did. After every game, there would always be food provided for us by the parents’ support group.

“So I really would like to reach out and thank the supporters and all the parents, and everyone who has been with us throughout the whole journey.”

Try-scorer Isaac (ACS #3) added, “Going into the final, we wanted to play for the support that we have behind us. The win was a whole team effort, and the team includes all the parents, and all the alumni.”