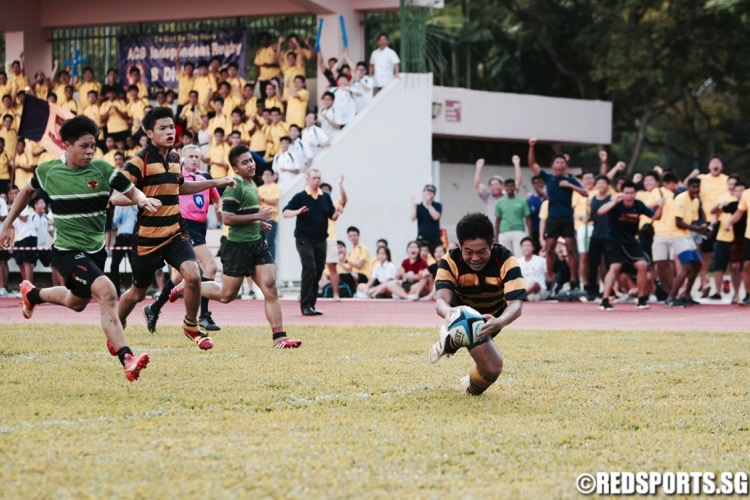 Finan Siow scoring the go-ahead try for ACS(I) that set them up for victory over RI. (Photo 1 © Les Tan/Red Sports)

His team was down 11-12 against a resurgent Raffles Institution after having led 8-0 at half time. Fifteen minutes was all Wei Xuan and his Secondary Four cohort mates had if they wanted to turn imminent oblivion into redemption in the final of the National B Division Rugby Championship.

At the back of their minds: the stinging loss to bitter rivals St Andrew’s Secondary School in the C Division final two years ago. RI were playing their guts out, helped by a two-man advantage at one point in the second half after ACS(I) prop Elijah Ho and flanker Reuben Sivadas were sin-binned for dangerous play. It was during this period that RI scored and converted their second try to take the 12-11 lead.

Then with eight minutes left on the clock and ACS(I) back to a full 15-man roster on the pitch, pandemonium. ACS(I) broke free from a scrum in their own half, catching the fast tiring Rafflesians on a turnover that ended with out-centre Finan Siow touching down for their second try, regaining the lead for the ACS(I) boys.

The final score read 25-12, earning ACS(I) its third-straight and 15th B Division title.

“This team has come very far, from the time they lost the C Division final two years ago,” said ACS(I) head coach Adrian Chong. “It took a lot of guts and belief for them to come back to win the game like this. I’m just happy we crossed the line this time.”

With the Rafflesians dazed after the sucker punch of Finan’s try, Captain Wei Xuan led by example, snuffing any hope of another RI comeback with a try of his own off a penalty line-out about 10 metres out. Fly-half Aran Willets successfully converted, as he did after Finan’s try, to add to the two penalties he scored earlier for a game-high 10 points.

Even after Finan had scored the try that gave ACS(I) the lead they never relinquished again, there were fraught nerves on the AC bench. Perhaps mindful of their coach’s instructions to keep things simple and to maintain their composure, the boys on the pitch decided to tap and go after they were awarded a series of penalties, instead of trying to stretch their lead.

“In the end, our boys’ resilience in defence told,” said coach Adrian. “They (RI) were trying to shift the ball to catch us on the blind side.”

For RI, their wait for another B Division rugby title will extend to 27 years at least. They last won the Police Cup in 1991, when their current coach Mark Lee was a Secondary One student.

“Our boys did very well,” said coach Mark, who played in the B boys final in 1994 where RI lost to Greenridge Secondary School. “In the end, it was a war of attrition. I thought we could maybe have managed the game better when we took the lead. We had territory, but they had possession.”

Tears were aplenty after the final whistle. For the ACS(I) boys, they were of jubilant euphoria. For Raffles, in their first final since 2012, it was of dejection and disappointment. Despite a valiant effort, ACS(I) was just one step too many for them.

Still, the latest chapter in the storied AC-Raffles rivalry was only possible after the Rafflesians had stunned overwhelming favourites St Andrew’s 19-15 in the semi-finals. Saints had earlier overrun RI 42-7 and edged ACS(I) 15-12 in the preliminaries, yet the 24-time champions were out of the B Division final for the first time since 2013.

For ACS(I) captain Wei Xuan, this win was as much relief as it was raw joy. He might have been part of the team that won the B Division title last year, but his cohort-mates didn’t get their own win as seniors until this year.

“This is really redemption for us,” said Wei Xuan after the game, referring to the heartbreaking C Division loss two years ago. “We finally have something to show for all the time we’ve invested into this sport and taking time out from our lives.”