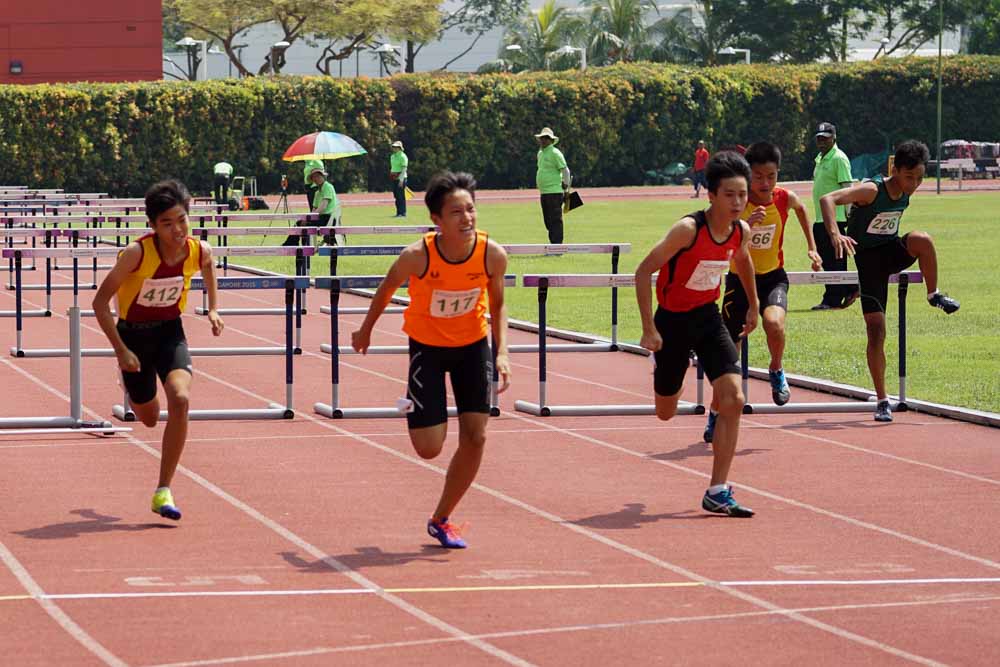 Bishan Stadium, Thursday, April 20, 2017 — Jeft Tay claimed the C boys 100m hurdles gold medal for the Singapore Sports School at the 58th National Schools Track and Field Championships, holding off two of his biggest rivals as all three of them went under 15 seconds.

Jeft clocked 14.73 seconds with a tail wind of 0.1 metre/second in the final, ahead of National Junior College’s Ken Hayashi and Victoria School’s Gabriel Lee, who both posted 14.98 seconds in a photo finish. Ken claimed the silver, while Gabriel, who switched to hurdling from wushu, the bronze.

“I was expecting the gap between us to be bigger, but I’m happy with the time,” said Jeft, who later ran 11.87s in the C boys 100m semi-finals just hours later to emerge as the fastest qualifier for the April 28 final at the Sports Hub. The secondary two student was running the 100m hurdles for the first time at the nationals, having switched over from the 400 metres.

“I just wanted to medal, it was much closer than I thought it to be because I am still quite new to the hurdles,” said Gabriel, who had matched Jeft stride for stride in the early stages of the race. He also knocked over the last hurdle, which disrupted his rhythm.