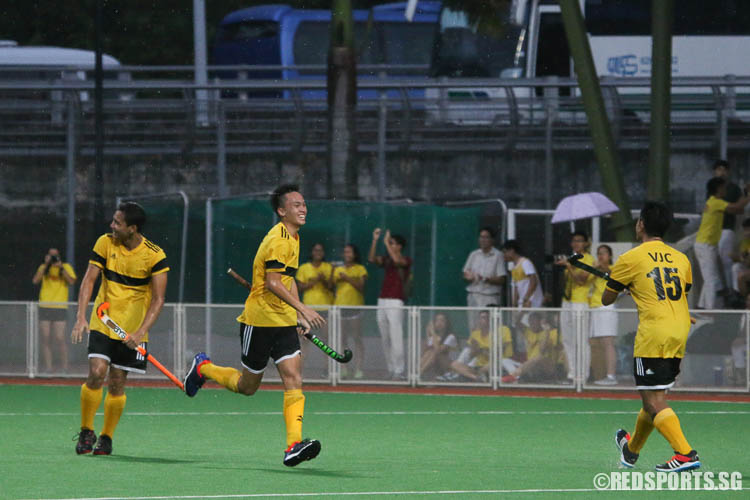 It was a repeat of the teams’ opening game of the season, where VJC had defeated RI by the same scoreline.

But while VJC got into a 3-1 lead first in that preliminary round game, this time round, VJC had to overcome a 0-1 deficit at half-time and a 1-2 deficit subsequently to inflict another painful defeat on their rivals.

This is only VJC’s second title since 1987, after last winning three years ago.

Powerhouses RI, in fact, started on the front foot in this final as they dominated possession for most of the first half.

Eight minutes in, after a cross went in, Yong How Zhi (RI #9) almost scrambled the ball into goal before VJC custodian Asaph Heng (VJC #7) managed to kick it out of play.

Shortly after, Adam Aniq (RI #7) sent a rapid low cross into the D after some good work on the right flank, but Brennen Tan (RI #16) could not make contact.

On 18 minutes, Salman Yusuf (RI #19) received a green card for a dangerous foul, and RI went down to 10 men for two minutes.

VJC almost took advantage, with Thomas Teo (VJC #6) sweeping the ball into the D and Jerome Chew (VJC #10) flicking it, but it went narrowly wide of the left post.

Apart from that opportunity, RI looked the much more threatening side on the offense.

From a free hit, Adam Aniq (RI #7) once again displayed nifty stickwork as he weaved through several VJC players in the middle of the pitch, before passing out to Jeremy Yeh (RI #23) on the right wing. After the cross went in, Asaad Khalique (RI #11) flicked the ball upwards towards goal but Asaph Heng (VJC #7) palmed it away.

Then on the stroke of half-time, RI took the lead. From a short corner, Yong How Zhi (RI #9) pushed the ball for Brennen Tan (RI #16) to sweep it from the edge of the D, as Marcus Ooi (RI #3) deflected it into goal.

After the restart, VJC looked the hungrier side as they ventured forward with more aggression.

Five minutes into the second half, Karuppiah Arasu (VJC #9) was put through on goal with only the goalkeeper to beat, but RI custodian Keane Kwa (RI #20) slid in incisively and cleared the danger.

From a short corner by Bryan Kong (VJC #2), Thomas Teo (VJC #6) drove the ball into the net. There was momentary confusion as the umpire initially ruled it out since it looked like a direct hit into the net. But after some discussion with his fellow official, the goal was allowed to stand as they ruled that the ball had deflected off a player before bulging the net.

RI were far from shaken as barely four minutes later, they snatched the lead again for 2-1. From yet another short corner, Ryan Jay Naidu (RI #13) hit the ball from the edge of the D, and Adam Aniq (RI #7) deflected it in another direction and into goal.

VJC, meanwhile, never backed down and surged forward for another equaliser. They almost earned their reward when Danial Razif Shah (VJC #5) stole possession from Lee Yong Qin (RI #8) on the right flank, before darting forward and crossing into the danger area. With Arasu (VJC #9) closing in, goalkeeper Keane Kwa (RI #20) managed to kick the ball out of the D.

Then, in two minutes of madness, VJC equalised again before claiming the lead for the first time in the game.

The equaliser came nine minutes from time, from a brilliantly worked-out short corner. After receiving the ball on the edge of the D, Thomas Teo (VJC #6) played a neat one-two with Arasu (VJC #9) to deceive the RI defense, before hitting the ball into goal.

The VJC faithful were not done celebrating yet when just seconds later, VJC earned a penalty stroke from a foul by Umaidurai Eashwar (RI #17) on Danial Razif Shah (VJC #5), who was through on goal on the counter.

Showing good composure, Thomas Teo (VJC #6) did not miss from seven yards out, as he converted the penalty stroke to complete his hat-trick and give VJC the advantage.

Frantic scenes ensued thereafter as RI desperately rallied in the final few minutes to try to push the game into extra-time, as VJC sat back in their own half and defended doggedly.

Misplaced passes were aplenty as RI struggled to break through the VJC backline even though they had the larger share of possession. Emotions ran high, with exasperated yelling among the Raffles supporters while the VJC supporters held their breaths as the clock ticked down.

Eventually, the final whistle was blown to cue rapturous celebrations from the VJC faithful, with a few students rushing onto the pitch to embrace their hockey schoolmates.

The RI players were left crestfallen, as they crashed down on their knees while a few others lay down on the pitch disconsolately.

On his team’s performance, VJC’s hat-trick hero and vice-captain Thomas Teo (#6) remarked, “It was very good, we really played our hearts out. This is the last game for the J2s, and for the J1s, they’ll have something to uphold next year. It’s really an achievement (for VJC to emerge double champions, along with the girls) – I hope the next batch can carry on this tradition.”

When asked what his team’s mentality was when they were down 0-1 and 1-2 initially, he said, “Like what our coach always says, ‘Keep your heads up, just don’t care what’s the score, just fight until the final whistle.’ So I think we did that very well, we played with all we can.”

“I’d like to thank our captain, Sayson (VJC #15), he really commands the team well. I would also like to thank our coach and teachers, and definitely our schoolmates, like even though it rained they still stayed with us,” Thomas added.

Meanwhile, RI captain Adam Aniq (#7) commented, “It definitely was a disappointing performance, but I’m no less proud of my team. They really worked hard before this – because we lost the first game – but they came back and really trained hard. But sometimes, even the best have to lose.”

When asked about the umpire’s call for VJC’s winning penalty stroke, Adam said, “I can only say so much, but at the end of the day it’s the ref’s call. But it’s okay, we gave them the chance and they actually took it.”

“For me, I think we still played our game, but I could see that the VJC team still had a fire in them, and we made a lot of mistakes also – they capitalised on our mistakes, and they scored,” he continued.

On the final few minutes of the game, he added, “We were definitely in their half more, but then they were starting to defend a lot and it was too late, time ran out. Even though we started playing much better towards the last few minutes, I guess it’s just our hard luck.”