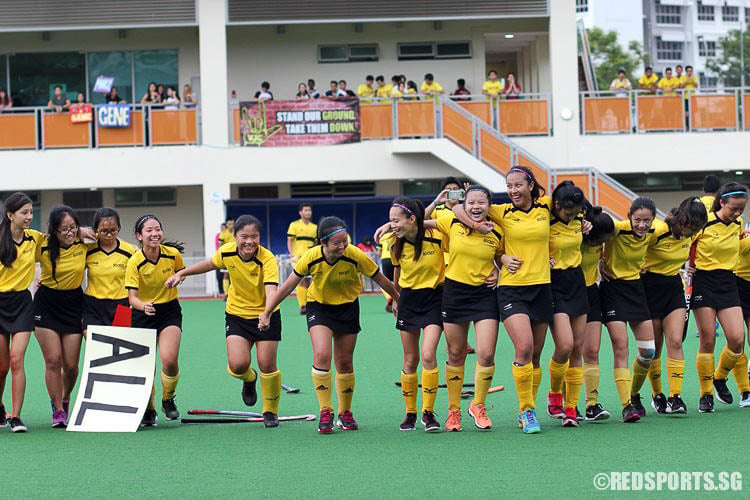 While ACJC’s defense had not been breached once en route to the final, they found it difficult to cope against VJC’s attacking superiority.

VJC took the lead as early as the second minute.

In a well-worked short corner, captain and national hockey player Gene Leck (VJC #14) played a one-two with Sarah Phua (VJC #7) to deceive the ACJC defense, before confidently sweeping the ball into goal.

It was apparent that the VJC players’ proficiency was on another level, as Sarah (VJC #7) displayed her dazzling stickwork, in one instance nutmegging an ACJC player.

Six minutes in, it was almost deja vu as VJC displayed a similar move in a short corner as the one which led to their opening goal.

After Gene (VJC #14) and Sarah (VJC #7) exchanged passes, the former’s shot was going towards goal but struck an ACJC defender’s legs on the goal-line instead. A penalty stroke was awarded.

Heather Lee (VJC #23), who scored two goals in last year’s final, stepped up to convert from seven yards out, striking into the bottom corner of goal.

ACJC’s best chance in the first half came when Tasha Tay (ACJC #68) crossed from the right flank, but Rachel Ann Mathews (ACJC #25) failed to make contact with the ball in the D.

It was then Claresta Yeo’s (VJC #9) turn to dazzle the crowd, dribbling past several ACJC players on the left flank to the byline before crossing into the danger area. Sarah (VJC #7) almost hit the ball on the reverse, but Nabilah Bte Eddy Razali (ACJC #24) made a timely intervention.

VJC went into the half-time break with a 2-0 lead.

They were far from done, though, as it was 3-0 just two minutes after the restart.

Claresta (VJC #9) dribbled her way through on the right before striking the ball, which took a deflection against an ACJC stick and trickled in.

Just moments after, it was Sarah’s (VJC #7) turn to get on the scoresheet. A slight scramble in the D culminated in Claresta (VJC #9) trying to hit the ball into goal, but it got scuffed by an ACJC stick. Sarah (VJC #7) then scurried to collect the ball, and swept it into goal after a quick turn.

Within eight minutes of the second half, it was game over as Claresta (VJC #9) scored her second and VJC’s fifth.

This was the pick of the lot, with Claresta being put through on goal after a long through-ball. As the ACJC goalkeeper scrambled forward, Claresta then audaciously struck the ball on the reverse, as it lobbed over the ‘keeper and into goal.

Gene’s (VJC #14) masterful stickwork was then on full display. In one instance, she deftly weaved her way through the entire ACJC defense before striking the ball, but it was kept out by the ACJC custodian’s leg guards.

VJC failed to add on to their scoreline thereafter, but it was flattering enough to continue their legacy in the competition for the 14th straight year.

On her team’s performance, captain Gene (VJC #14) remarked, “We went in with the heart to play, to enjoy ourselves. For the J2s, it was very much to enjoy their last hockey game for the school, and for the J1s, it was an experience to build them up for A Div next year. I think we played pretty well, we played as a team, and we showed them what perseverance is.”

On retaining her school’s dominance in girls’ A Division hockey, she continued, “It’s definitely very honourable. I honestly feel like there was a lot of pressure, but I think it was a pressure that kept us going, and it’s how we overcome the pressure that makes us great.”

In the A Division boys’ final later in the day, VJC clinched the title as well, beating RI 3-2. This makes VJC double champions for only the second time, after last claiming the feat in 2013.

Gene added, “I think our boys worked really, really hard too. It’s very difficult for them to defeat the defending champions but I think our boys really pushed themselves hard throughout the whole season and during trainings, and we’re very proud of them.”