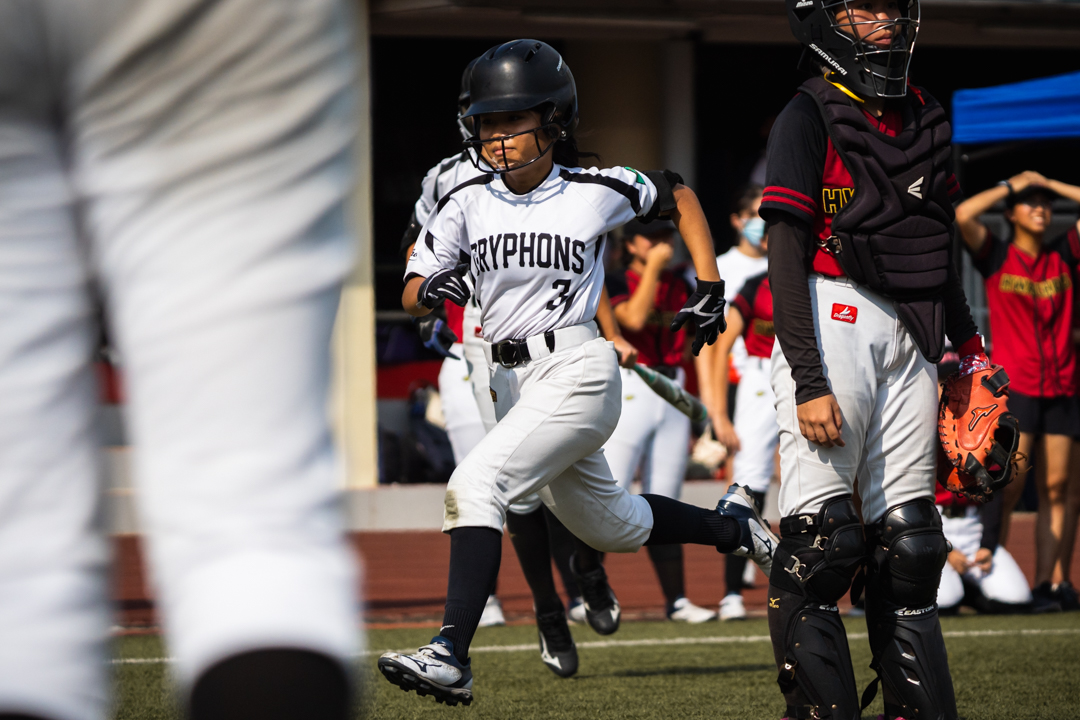 Caitlin Cheah (RI #3) makes her way home in the third inning of the game. Raffles Institution emerged the A Division girls’ softball champions, defeating Hwa Chong Institution 2-1 after an extra sixth inning to win the championship for the first time since 2012. (Photo 1 © Bryan Foo/Red Sports)

Anglo-Chinese Junior College, Wednesday, May 25, 2022 — As Raffles Institution (RI) batter Chan Csen Csen (#7) stepped onto home plate in the A Division girls’ softball final against Hwa Chong Institution (HCI), a million thoughts raced through her head. Her coach had earlier told her to switch up her style of play. Chan mused: “To be honest, when coach asked me to make the bunt, I was a bit scared — because I don’t really bunt during games.”

“But I just told myself I have a job to do,” said Chan, who was also the Raffles pitcher.

Waiting until the last possible second, Chan then swiftly shifted the bat towards her front, and with a satisfying crack, the softball struck the metal of the bat for the bunt.

The action unfolded in a blink of an eye. Just seconds after that play began, the tie-breaking extra inning and the game were over — Raffles runner Denise Tan (RI #87) ran from second base to find her way home, bringing with her the championship for Raffles.

Prior to that pivotal point, the score remained 1-1, with first-to-bat side HCI not managing to put in any runs during the top half of the extra sixth inning. Tan’s winning run was decisive as any points scored by Raffles would conclude the game in their favour.

Raffles’ title win was a stunning season-long comeback story, overcoming the odds after having previously lost to favourites HCI by a mercy rule 10-run difference in the group stage.

It was the first time Raffles have lifted the challenge trophy in a decade, having last won the A Division Girls’ Softball title in 2012.

Raffles captain, Adele Yuen (RI #72), said: “We did come in as the underdogs and it has been a tough fight, but I am proud of everybody for putting in their best effort and we got to where we wanted to be.”

“It was the icing on the cake that we managed to win the A Div Girls’ which is quite elusive for us,” said Raffles head coach Farhan Harahap.

The first two innings of the final were scoreless affairs, with both sides prevented from securing any runs in light of strong fielding by their opposing team.

The girls in red drew first blood in the third inning, with Jeanni (HCI #5) scoring from third base with a double from Kelicia (HCI #23).

However, Raffles replied quickly with Caitlin Cheah (RI #3) scoring an equalizing run, arising from a bunt to first base coupled with an error on third base by Hwa Chong.

Regina Yeo, co-coach of HCI, said: “At the end of the day, if you see the whole game, there were only two errors that cost us the game. If we could eliminate them… it would definitely have been a tighter game… or maybe more innings to come.”

The single points apiece in the third inning would be the only runs scored by either side during the length of the regulation five innings, as the fourth and fifth innings’ scoreline mirrored the opening two. The game was, therefore, brought into extra innings.

Unlike other sports with sudden-death rules in overtime, in softball each team would take turns to both bat and field during extra innings, where play continues until there is a difference in the number of runs scored within an inning to break the tie. In extra innings, the team batting would have runners start on first and second base to increase the likelihood of scoring a run.

“This is our first extra innings game of the season, so of course it was something new to them,” said Raffles coach Farhan. He added that with Raffles second to bat, “psychologically… we have the advantage over Hwa Chong, and it played to our advantage, especially in the [sixth] inning where we already have one out.”

As the tension reached a crescendo, fate, however, threw a curveball as the lightning alert siren went off at River Valley High School.

“When the lightning alert came on, we were mentally prepared that we would have to play today, and we said ‘Ok, whatever happens just stay in the game’,” said RI’s captain Yuen. “We just saw it as a good chance to go back, reset, and refresh ourselves.”

The match continued the next day from the top of the sixth inning with HCI on bat. Hwa Chong unfortunately were not able to add any further points to their scoresheet. Chan’s (RI #7) bunt and Tan’s (RI #87) successful run thus sealed their fate.

On his girls’ performance, coach Farhan said: “They really exceeded my expectations. We came into the game knowing it would be a tough game because we lost to them earlier 10-0 [in the group stage].”

“Defensively we played a tighter game,” he added. “We didn’t make many fielding mistakes — which we did in the earlier game — so that led to a couple of runs.”

Ever humble, Chan (RI #7) remarked: “Even though I scored the winning run, it really was because of my team that I was able to win with them.”

“I want to thank AC and Hwa Chong, because they really put up a good fight, and we really appreciate being able to play against such formidable opponents,” said captain Yuen (RI #72) in closing.

If you know the HCI players’ full names, do drop a comment and we will update the team roster accordingly.