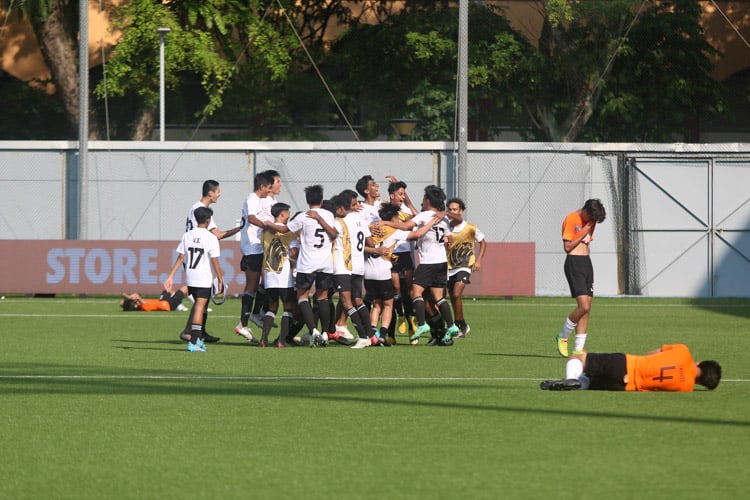 Jalan Besar Stadium, Wednesday, May 18, 2022 — With one swing of his boot, Victoria Junior College (VJC)’s Anton Yen Goh (#19) drove the ball into the bottom left corner of a gaping net, cueing thunderous roars from the Jalan Besar crowd at the first National Schools A Division boy’s football final since the start of the Covid-19 pandemic.

That strike 15 minutes into the first half turned out to be the first and only goal of the match, as the Victorians reclaimed the title their seniors had surrendered to same opponents St. Andrew’s Junior College (SAJC) three years ago.

“It was just incredible,” said Anton, a first-year VJC student who played on the left wing. “I just shot the ball and hoped that it went in, and it did.”

“It was just amazing, I couldn’t hear myself during the game… I’m losing my voice right now from screaming,” he added, in tribute to the sizeable number of supporters who came down for the final after a ban on spectators at inter-school games was lifted late last month.

It is VJC’s first title since 2018 and eighth trophy in 20 editions of the championship since 2001, second only to Meridian Junior College’s nine-title tally within that same period. Now called Tampines-Meridian Junior College after a merger, the latter were knocked out by SAJC this year in the quarter-finals.

In assessment of his team’s performance, he said: “I won’t say the match is a good reflection of their abilities, because I think the weather was very hot and really took its toll on them.”

“But I thought we should have wrapped up the game in the first half,” added Tan, who also coaches the school’s middle- and long-distance runners in the track and cross country team. He is accompanied by assistant coach Lim Wei Quan for the football team.

With the alumni who played that 2019 final in attendance amongst the crowd, this rematch between the same two schools proved to be a rather cagey affair with clear-cut chances few and far in between — a contrast to the 4-1 goalfest three years ago.

Both teams had also won their respective semi-finals 1-0, with VJC edging past St. Joseph’s Institution and SAJC getting the better of Anglo-Chinese Junior College.

The Saints’ first sight of goal in the final came 10 minutes in when they were awarded a free-kick on the edge of the penalty box, but SAJC captain Ryan Peh (#15) sent the ball straight into the gloves of VJC custodian Nur Iman Shah (#1).

That missed opportunity proved costly as the game’s solitary goal came just five minutes after. With Saints ‘keeper Muhammad Farhannan (#16) off his line, a Victorian lobbed ball was first headed off the line by the Saints defence, before Anton (VJC #19) directed the ball into the net from the right-hand corner of the penalty area.

The Saints’ best chance of the game came nine minutes after the interval, when a loose ball presented Jireh Lim (SAJC #25) a one-on-one opportunity against opposing ‘keeper Iman (VJC #1). Eyeball to eyeball, the latter showed Spiderman reflexes to save the eventual shot at point-blank range.

After two 35-minute halves plus added time, the scoreline remained the same to rapturous approval from the Victorian supporters.

“We are very happy, because last year we were very sad that there was no NSG (National School Games),” said VJC skipper Tan Ray Yien (#12), who rotated between forward and right wing during the final.

“So when we heard officially that there will be NSG this year, we were very determined to make it count and win.”

Due to pandemic restrictions, the football teams were only allowed to train for the 11-a-side format from late March onwards, adding to the unpredictability they experienced this season. However, Ray Yien said his team managed to get around those challenges seamlessly.

“I think we have quite a number of experienced players who played in secondary school, so we adapted quite quickly to the change of format,” he said.

VJC coach Tan added that psychologically, there was not an issue in keeping his players motivated since the start of the year.

He said: “I always let them know that there will be Nationals. We always prepared as though there was going to be Nationals. So with that in mind, they were more prepared than normal.”

Despite defeat, SAJC football teacher-in-charge Roland Lee was pleased with his charges’ performance.

“They played their best… I mean it’s not easy playing in a final, and I think they played above their expectations,” he said.

“In terms of their effort and everything, they didn’t hold back at all, they gave it everything, so I’m proud of them,” added Lee, who has been with the school for 21 years and was the coach until 2009. The team is currently coached by Loh Ngiap Tai.

Recalling how his team have only been playing 2 vs 3 games and could not practise headers during training up till late March, Lee credited his team’s patience and resilience throughout the season.

“Nothing can compare to playing 11-a-side, so we kept hoping and hoping that we could play 11-a-side, so in the end everyone was very thrilled,” he said.

“So as the season went on… it’s also good that throughout this whole A Division journey, we could see how the team has improved.”

Meanwhile, VJC goal scorer Anton thoroughly enjoyed his experience of playing this season and cannot wait for the next.

“The season has been incredible, with a lot of ups and downs,” he said. “But we persevered, and we eventually won the title… we’re just so happy.”