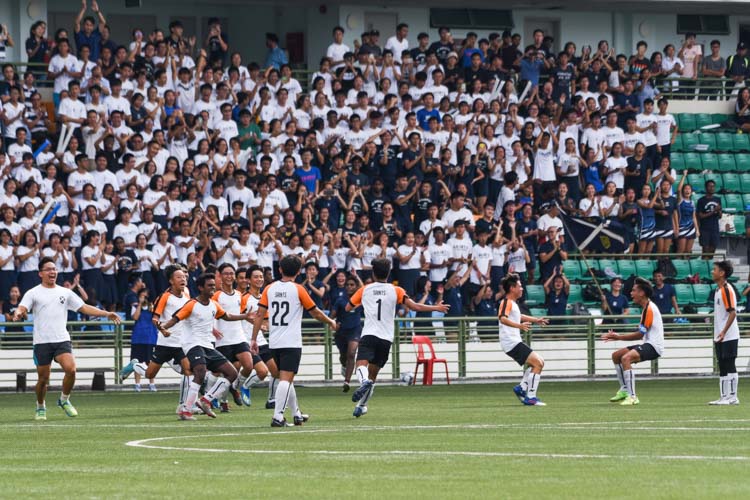 SAJC celebrate at the end of the final after beating VJC 4-1 for their first ever A Division football title. (Photo 1 © Iman Hashim/Red Sports)

Jalan Besar Stadium, Friday, May 17, 2019 — From where he sat on the pitch, Ahmad Yusuf raised both his hands and pointed to the sky. The St. Andrew’s Junior College (SAJC) forward had just seen the ball roll into the net for his team’s fourth goal against defending champions Victoria Junior College (VJC) in the National A Division Football Championship final.

Latching onto a long ball lofted from inside his own half, Ahmad (SAJC #9) got a shot away just before a late tackle bundled him over. This was his second goal as the Saints played a clinical counter-attacking game in the second half that punished the Victorians as they poured forward seeking the winner after the first half ended 1-1.

“This year we didn’t have a dream team,” said Ahmad between breaths, after the match. “But we had a team with a dream.”

The 18-year-old could not quite wrap his head around the scenes that had unraveled. His side’s dream run had culminated in a fiery encounter against VJC in SAJC’s first final appearance since 2014, and the Saints had just stunned the Jalan Besar crowd with a flattering 4-1 win to clinch their maiden championship title.

The dream was now an actuality.

SAJC’s victory puts a pause to a Victoria-Meridian dominance in the competition: in the past 18 years, VJC were seven-time winners, while Meridian Junior College — now merged with Tampines Junior College to form Tampines Meridian (TMJC) — had taken the throne nine times. This was SAJC’s fifth final, and Ahmad’s (SAJC #9) second-half brace proved pivotal as his team eventually pulled away with a three-goal winning margin.

But the man-of-the-match was quick to deflect all praise directed at him.

“The first half I was completely off,” said the grounded Ahmad, who also scored a late equaliser in the semis against TMJC with a spectacular volley to bring the match into penalties. “This whole game was solely a team effort. I love my team, that’s all I can say.”

In fact Ahmad’s crucial goals in the semis and final were three of just a total four he scored in the entire competition, partly due to an injury which saw him miss three games. SAJC’s season certainly did not get off to the brightest of starts, with a 2-1 loss to TMJC in the preliminaries.

“Everyone doubted us from the start, we didn’t top our group, but we showed that in order to be champions you need to learn how to lose first,” added Ahmad.

For SAJC skipper Jeremy Chia (#5), the journey has been an unforgettable one too. The centre-back was previously a top national age-group bowler during his secondary school days at Maris Stella High, but chose to switch sports in JC.

“It’s really surreal,” said the Saints captain. “When I first came in, I was very fresh, I was very novice. But I had this passion for football, and I know that if I worked hard, I could bring this team to the title.”

Jeremy (SAJC #5) was part of a sturdy Saints backline which conceded just five goals in eight games en route to the final. And it was no different in the final, with SAJC preventing their opponents from breaking the deadlock amidst the early VJC pressure.

This paved the way for SAJC to draw first blood nine minutes in via Naden Joshua Timothy Koh (#10). A through-ball to Ahmad (SAJC #9) and a subsequent strike saw VJC ‘keeper Wong Yi Hong (#1) parry the ball, but the rebound fell kindly to Naden (SAJC #10) who found the back of the net with a low curler from outside the box.

VJC equalised six minutes before half-time to ensure it was still anybody’s game at the break. Receiving the ball at the edge of the six-yard box, Muhammad Haikel B Zaini (VJC #11) drove it low into the net at the far post.

“We were prepared to attack (in the second half),” said VJC coach Tan Yew Hwee, who is also the Physical Education Head of Department. “But when you concede so early again, then there’s an issue.”

Unfortunately for the Victorians, that undesired scenario happened — SAJC raced back into the lead three minutes after the restart when a free-kick swung in from the right by Zachariah Lim (SAJC #11) was flicked on by Makito Hayashi (SAJC #33), and inadvertently deflected off Adam B Johan (VJC #7) past the hapless Yi Hong (VJC #1) in goal.

“It’s a final — when you’re losing, you have to take risks,” added Tan, who has been with VJC as a teacher since 1995. “And when you take risks, there’ll be gaps. And when we don’t score, then obviously there will be a gap in between, and they (the opponents) will be the ones scoring. That’s part and parcel when you play a game.”

It was exactly how the second half panned out. VJC showed their attacking intent and had their fair share of chances, but wasteful touches in their final third saw SAJC hit back on the counter.

Ahmad (SAJC #9) earned his first goal in the 52nd minute, after a deft flick found Zachariah (SAJC #11) with space to shoot, and as the latter’s shot got smothered away by the VJC defense, Ahmad gladly prodded the ball home to make it 3-1.

Four minutes from the full 80, it was practically game over when Ahmad (SAJC #9) scored his second and the Saints’ fourth.

The brace capped off a brilliant shift for the forward, who along with Naden (SAJC #10) and Zachariah (SAJC #11) were instrumental up front for the Saints, constantly threatening the VJC defense with their pace and trickery.

SAJC football teacher-in-charge Roland Lee, though, remained humbled by the victory and maintained that his boys were “fortunate”.

“The scoreline is flattering,” said Lee, who has been with SAJC for 18 years and was the coach up till 2009. “I mean, the difference (between both teams) is definitely not three goals. VJC is a very, very strong team. It’s just that they were attacking, so there was space at the back.”

Lee admitted that his boys were the underdogs, and that they had to “fight with their lives” in every game.

“It could have easily gone the other way, because VJC is a fantastic team and they are the defending champions,” he continued. “We are very grateful for this outcome and we don’t take it for granted.”

VJC coach Tan, similarly, was gracious in defeat. Embracing his players after the final whistle, he was adamant they could still hold their heads up high.

“I think I would rather say that the SA side played much better, so I would give credit to them,” he said.

“The boys have given their best. I am at fault for being unable to put in the right strategy to cope with the SAJC attack. My boys should be proud of themselves to have come this far.”

VJC captain Jeremy Loke (#4) chipped in, saying: “I’m still proud of all the boys. It wasn’t an easy journey, but the whole team gave it their all.”

As for opposite number Jeremy Chia (SAJC #5), lifting the trophy felt surreal and he was quick to attribute the triumph to a team effort. Stealing a look at his teammates taking pictures after the match, the reality probably had not sunk in yet and he still could not hide his disbelief.

“I feel that we showed we were among the hungriest teams in A Div as well as in team spirit,” he said. “We are not necessarily the most talented, but coming into this competition we knew that spirit beats talent.

“And this whole journey wouldn’t have been possible without my teammates, coach (Loh Ngiap Tai) and Mr Roland. I’m so thankful for them and this victory is all ours.”