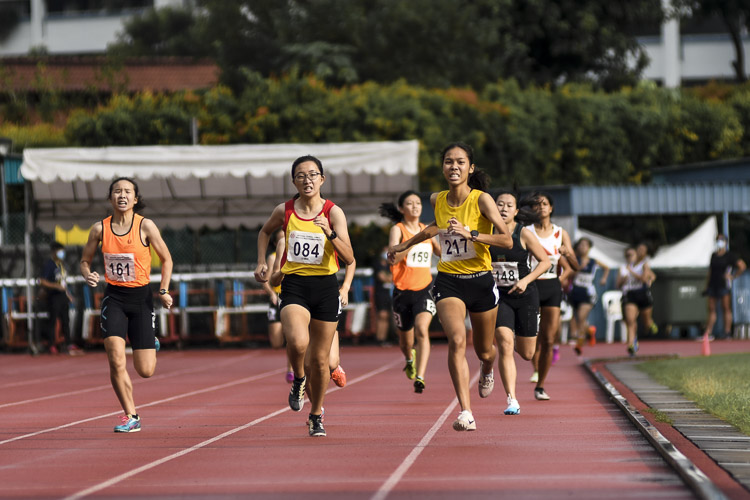 Bukit Gombak Stadium, Wednesday, May 4, 2022 — By the tiniest of margins, Victoria Junior College (VJC)’s Claudia Tang and Lim Wei Feng of Anglo-Chinese Junior College (ACJC) grabbed victories in their respective A Division 800-metre finals to make up for second-place finishes in the 1500m.

Claudia held off the challenge of Hwa Chong Institution (HCI)’s Eunice Chin (2:30.09) and Singapore Sports School’s Janelle Lum (2:30.80) to win her race in 2 minutes 29.40 seconds, thanks to a strong kick on the home straight.

“I feel pretty happy,” said the second-year VJC student. “I just told myself I could do it, and to just keep pushing… and I just tried my best to kick at the last 300 (metres) so I could sustain a gap from the second-place (runner).”

Claudia’s win came after qualifying only second-fastest from the heats, and placing in silver position (5:26.03) in the 1500m final which was won by her VJC teammate Faith Zhen Ford (5:07.82).

“I would say I had some sort of expectations to at least get top 4 (in the 800m final)… so I’m very satisfied with my result and I just wanted to do well because it’s my last NSG,” added Claudia, who is coached by VJC teacher-in-charge Tan Yew Hwee, a staff at the school since 1995.

Claudia’s personal bests over two laps stand at 2:26.5 (hand-timed) at the International Little Athletics Championships and 2:26.74 (electronically-timed) at the ASEAN School Games (ASG), both clocked in July 2019.

It was also her first gold in the event since 2018, representing Cedar Girls’ Secondary in the C Division. In her last National Schools in 2019 before the pandemic hit, she came in second (2:27.27) in the B Division behind Singapore Chinese Girls’ School’s Emily Ong, but finished first in the 1500m (5:09.98).

Claudia’s latest gold maintains her consistency across the years in the National School Games, having placed in the top three for both her individual track events since Secondary 1.

Funnily enough, she admitted that she has been the opposite of consistent during the last two years of training during the pandemic.

“Throughout these two years I’ve been pretty inconsistent in my training, so I need to work towards that… but I have a very supportive team in VJ, so we train together and push one another,” she said.

The National Schools Cross Country Championships now await on May 18 at Bedok Reservoir, where she will attempt to maintain another consistent streak — she placed second in 2017 and was the top individual finisher in 2018 and 2019.

Meanwhile, the margin of victory in the boys’ 800m final was an even smaller one, as ACJC’s Wei Feng pipped Lee Wen Jie of Jurong Pioneer Junior College (JPJC) to the line by 0.09 seconds, stopping the clock at a personal best 2:03.61.

“I’m really happy that I won, after losing by a bit in the 1500m,” said Wei Feng, whose previous 800m PB was 2:04.11 set in January this year at the Singapore Athletics National Championships.

“The (1500m) loss made me more motivated, so I basically trained harder and prepared better for this race… I felt better today too,” he added.

Wei Feng credited his ACJC teammate Mervyn Ong, who finished third (2:04.76) in the 800m final, as the pair had strategised to push each other hard in the first 400 metres of the race.

“It was tactical, we actually planned to go out hard… so we went out really hard for the first lap and then we brought it home,” said Wei Feng, who trains together with Mervyn under ACJC coach Elangovan Ganesan.

Wei Feng’s victory was his first since a double gold in the 1500m and 3000m in 2018, while running in the C Division for Nan Hua High School.

JPJC’s silver medalist Wen Jie, meanwhile, could be satisfied after winning his school’s first ever athletics medal since its inception from the merger of two former junior colleges.