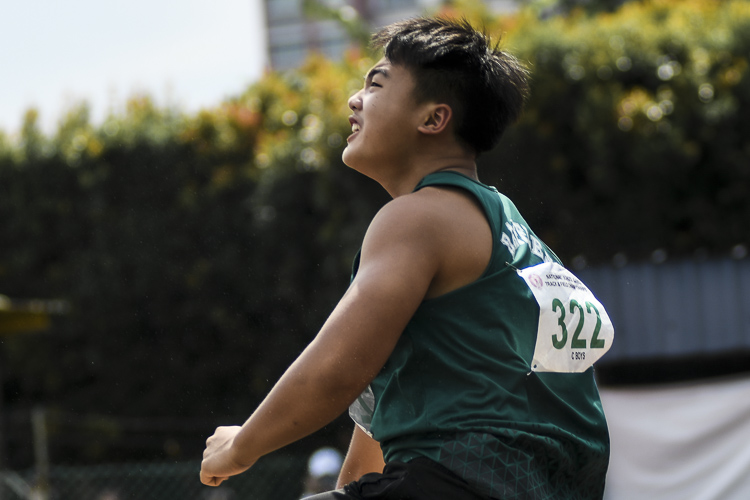 Bukit Gombak Stadium, Friday, April 29, 2022 — Having set new national age-group discus records twice in the space of five days, Raffles Institution (RI)’s Anson Loh was not about to rest on his laurels.

He had his eyes firmly set on victory in the C Division boys’ shot put, and the possibility of another record-breaking effort.

Though he fulfilled the first objective with a personal best 15.51-metre throw, the gritty Secondary 2 student seemed visibly upset at the missed opportunity for the second.

“Yes I was aiming for (the shot put record), but I felt I could have done better if I had mentally prepared myself even better before the competition,” said Anson.

“I also could have taken more pointers from my coach, because I didn’t take note of them during the competition itself.”

He comfortably claimed the gold ahead of teammate Gabriel Ng, who recorded 13.61m for silver, and Victoria School’s Darius Lai who took bronze with 12.36m.

Coached by RI throws coach Choo Chee Kiong, Anson said that he will work even harder for future meets to meet his goals for the shot put.

For now, Anson could revel in the honour of being the top local under-15 discus (1kg) thrower all-time with a huge throw of 58.88m on April 7, shattering RI old boy Jonathan Low’s C Division meet record of 53.66m set in 2014.

“I feel happy and relieved, because all my hard work has paid off with my performance that day,” said Anson of his latest discus record performance.

Anson, whose older brother Aloysius is also a thrower from the same school, also paid tribute to the latter’s support in his athletics journey.

“During training, whenever he sees me he would provide tips or pointers so that I can improve, and when I’m down he would also encourage and motivate me so that I can keep on going and work even harder,” said Anson of his brother, who also won gold in the A Division discus event and will next compete in the shot put on Thursday (May 5).