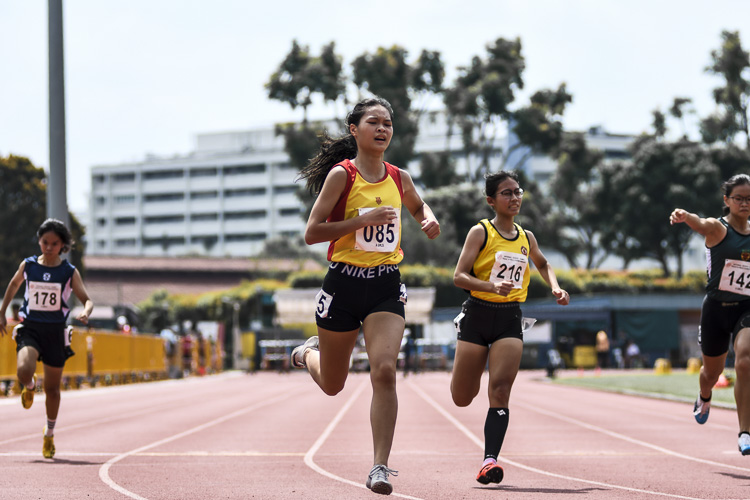 Bukit Gombak Stadium, Friday, April 29, 2022 — Having missed their entire B Division due to the pandemic, Hwa Chong Institution (HCI)’s Eleana Goh, Victoria Junior College (VJC)’s Ashley Tan, Raffles Institution’s Lyn Liau and Singapore Sports School’s Samantha Ortega made the most of their first year in the A Division, taking the top four positions in that order in the girls’ 100-metre final.

Eleana’s win wrapped up a sprint double — her first at an inter-school meet since Primary 6 — crossing the line in a quick 12.44-second run to add to her 200m victory earlier in the week.

“It’s been five years since I got gold for both my 100m and 200m, so what happened to me was something… new to me, in a sense,” said the 17-year-old former Nanyang Primary and Nanyang Girls’ High School athlete.

“It’s been a long time coming, and I’m just very grateful for this year’s performance because I really worked very hard for it.”

Though her winning time surpassed her personal best of 12.94s set in April 2021 by half a second, it was aided by a non-legal 2.8m/s tailwind.

Eleana recalled the challenges brought about by the pandemic in the last two years, but maintained that it was still an experience to cherish.

“It’s definitely been very tough and challenging, because I think a lot of us athletes gauge our performance based on competition,” she said.

“It was quite a new experience, I guess, not being able to compete, but it was in those times that I got closer to my teammates.”

Eleana also thanked her competitors for the push, in particular silver medalist Ashley.

“I’m really proud of her because she has improved so much,” said Eleana. “It was really nice running with her, because I’ve seen how hard she’s worked also.”

Meanwhile, Ashley was satisfied with her 12.82s silver showing even though she had qualified fastest both from the heats (12.86s) and semis (12.87s), which are her fastest wind-legal times yet.

“I was super shocked,” said the first-year VJC student, whose previous best time before the National Schools was 13.15s, set in January last year at a Singapore Athletics Performance Trial.

“Before Nationals, I was focusing a lot on the 100m hurdles event, so in the first place I didn’t have a lot of expectations coming into the 100m.

“For the final, I knew it would be very hard to maintain first position because I was going up against Eleana who is a very strong competitor. I’m still quite satisfied with my overall result, and I’m really grateful to have the opportunity to compete with such talented competitors… Eleana deserved the win,” Ashley added.

Ashley’s silver was also her second medal of the meet, having clinched gold in the 100m hurdles straight final two weeks ago in a personal best 15.91s, finishing as the only athlete under 16 seconds ahead of silver medalist Erika Lee (16.96s) of HCI, who placed fifth in the 100m final, and bronze medalist Claire Chen (17.50s) of Tampines Meridian Junior College.

Remarkably, it was her first time clearing the distance between every hurdle across the race in three steps, as she cited adrenaline as a factor.

Called an “accidental hurdler” by her coach Joy Kuan, Ashley only started hurdling at the end of Secondary 1 at Cedar Girls’ Secondary and won the C Division 80m hurdles a few months later in 2019.

She said she was not planning to continue hurdling in the A Division because she was worried about the increase in hurdle height, but could now be glad she did so.

Acknowledging that she will likely continue doing the same two individual events next year, Ashley expressed her keenness to improve further.

“At least now I have more confidence knowing I can clear all the hurdles in three steps (in between),” she said.

“And for 100m, at first I didn’t think much of it, because I wasn’t seeing much improvement compared to my hurdles. But now that I’ve gone sub-13, I think I might want to put in more effort in improving my speed as well.”