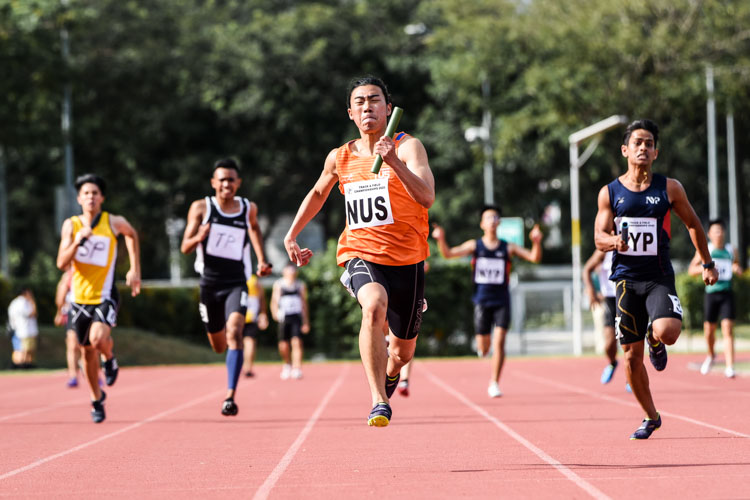 Home of Athletics, Saturday, January 18, 2020 — For the first time since 2010, the men’s team of the National University of Singapore (NUS) have clinched double gold in the relays at the Institute-Varsity-Polytechnic (IVP) Championships.

The 4 by 100-metre final saw three teams dip under the 44-second mark. NUS clocked a time of 43.05 seconds, while Nanyang Technological University (NTU) and Nanyang Polytechnic (NYP) finished in 43.77s and 43.86s to claim the silver and bronze respectively.

The winning quartet from NUS consisted of Raymond Scott Lee, Sing Hui, Elgene Chng and Mitchell Teh who anchored them home.

Even though they secured their victory, the team admitted that the preparation for this race was a challenge.

“We had to reschedule some of our trainings to fit in relay training to make sure our passing was smooth,” said Sing Hui who finished third in the individual 100m the previous weekend. “The past six months have been hectic juggling training, studies and hall commitments.”

“We don’t really train together,” added Elgene who finished fourth in the 200m final earlier that day. “There were different runners for heats and finals so this is like our first time passing as a team.”

To add to this, Raymond who was the lead off runner had only recently come back from exchange in time for the championships.

“Elgene and I would like to thank our coach Mr Melvin Tan as well as Coach Gabriel for supporting us,” said Sing Hui. “We also want to thank our training mates at NYSI and NUS for their guidance and help.”

Justin, the first runner, said of his team’s race tactics: “For me, I felt that all I had to do was give Russell the lead so I wasn’t too focused if runners on the inner lanes were catching up to me.”

“It was quite obvious there was going to be a gap for me to close because Wei Bin was on SMU’s second leg,” added third runner Kishorwaran, referring to the Singapore Management University (SMU)’s Ow Yeong Wei Bin who had set a new meet record in the 400m Hurdles earlier. “But I stayed calm, followed my race strategy to ensure I had enough to hold off any other runners in the last 100m.”

Wei Shien, when asked about receiving the baton in the lead, said: “I wasn’t sure if anyone was catching me, but even if they did I was determined to chase them down.”

The women’s 4x100m relay saw the team of Tor Jia Wen, Haanee Hamkah, Clara Goh and Gwendolyn Therese Lim from Temasek Polytechnic (TP) emerge the only team to go under the 50-second mark in a time of 49.73s, defending their title in the process.

Both Haanee and Gwendolyn had already bagged gold medals in the 100m and 200m respectively in these championships. To top it off, Haanee and Clara were also part of the 4x100m squad for the 2019 edition of the Southeast Asian Games held in the Philippines.

Their closest competitors SMU which featured sprint queen Shanti Pereira on anchor finished second in 51.06s, followed closely by RP in third with a time of 51.89s.

Despite only getting silver in the one-lap relay, SMU were able to claim victory in the 4x400m relay as Shanti ran a blistering 58-second split on the second leg for her school. Her teammates consisted of Seet Xiu Li on the lead off, Carissa Wong on the third leg and 100m Hurdles champion Kerstin Ong on anchor. They finished in a time of 4:19.62.