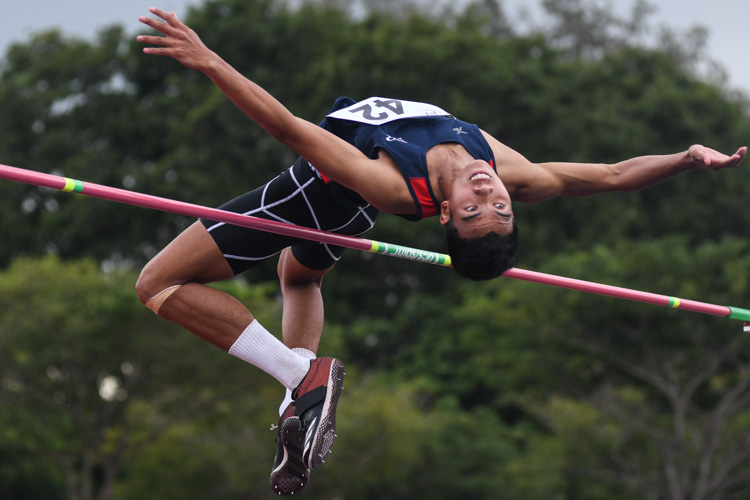 Kallang Practice Track, January 18, 2020 — In his three years of competing in the Institute-Varsity-Polytechnic (IVP) men’s high jump event, Hairul Syamil of Nanyang Polytechnic (NYP) has won in 2018 and 2019 but he was still unsatisfied with his performance in the final year of competition.

Since 2018, Hairul has been eyeing the IVP championship high jump record of 2.04 metres, held by none other than his coach, Ronnie Cai, who was watching from the sidelines.

Hairul had cleared every height he jumped with just a single attempt, starting from 1.80 metres up to 1.93 metres. But it was after this height that he hit a stumbling block.

Silver medallist Bryan Wong of Singapore Management University failed in his first attempt of jumping the 1.93-metre height. Instead of trying to clear the same height, he opted to raise the bar to 1.96 metres, without Hairul’s knowledge, as the NYP student was discussing his next strategies with his coach.

When Bryan failed to clear the new 1.96-metre height after two attempts, Hairul thought his fellow competitor had one more attempt but he ended up being alarmed when his name came up instead.

“So (Bryan) skipped to the next height to 1.96 because he didn’t clear to 1.93, right, so I didn’t know, I thought he has got one more try, so I eased off talking to my coach and all that, and then suddenly the umpire called: ‘four two, first attempt’,” said Hairul.

With the timer already started, Hairul went up to clarify the situation with the umpire.

“So I went up to them, and they already started the timing, so I was asking them what happened, but they said ‘never mind, just jump, just jump’ but I wanted to know what happened… I got so pissed,” added Hairul.

With just 10 seconds on the clock, Hairul went back to his coach, Ronnie, who told him to just not attempt the jump.

“Hairul, he got a bit hot-headed, so when he is not thinking straight, we as coaches have to come in, so I had to come down and told him: ‘although it’s one attempt less, but if you crossed it for your first attempt, then you will get that confidence in’,” said Ronnie.

“We had to calm the athlete down because if he’s really frustrated, we do not know what’s going to happen out there in the second or third attempt, he may not even cross 1.96,” added Ronnie.

Hairul ended up clearing the height at 1.96 metres in just one jump with the bar still shaking but staying up when he landed and celebrated.

“He’s always very fired up for IVP… it’s the competition that gives him the edge,” said Ronnie.

Unfortunately, the record would prove to be elusive for Hairul as he failed his three attempts at 2.01 metres.

“This was supposed to be the record year but yeah, then (Ronnie) was telling me, ‘You better go to university and break my (IVP) record’,” said Hairul with a smile.