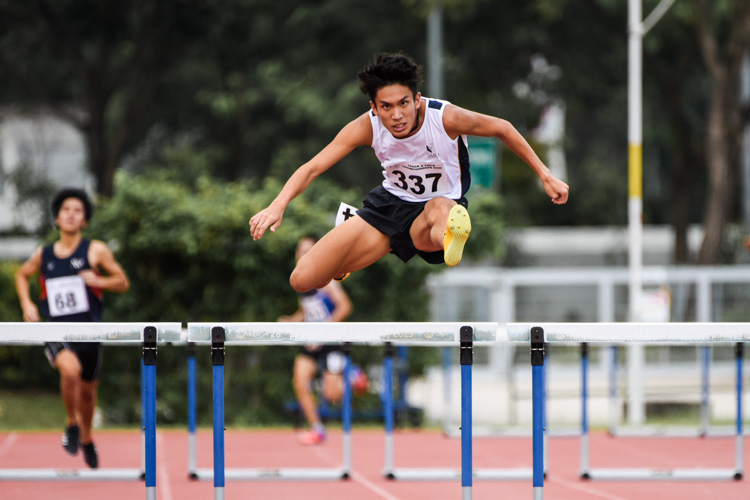 The Hwa Chong Institution alumnus recently ran in the South East Asian (SEA) Games held in the Philippines last month finishing with a time of 52.46s.

“The goal for me today was to go for the record but I would have been okay if I didn’t break the record either since I’ve just come back from a break,” said Wei Bin, who currently holds the fastest electronic timing in this event by a Singaporean with a 52.44s clocked last year at the World University Games (WUG) in Italy.

Isaac Toh of Nanyang Polytechnic (NYP) finished second almost seven seconds behind in 1 minute and 1.03 seconds, while teammate Silas Ng finished third with a 1:02.82 effort. Their positions in this event were the same as in the 110m Hurdles event last week.

In the Women’s 400m Hurdles, Celeste Goh of National University of Singapore (NUS) sailed to a fairly comfortable win with a timing of 1:08.01. Even though she was running in Lane 3, Celeste had made up the stagger on the hurdler in Lane 8 by the fifth hurdle and was unassailable.

“I wasn’t very prepared for hurdles this year so I didn’t manage to run the timing I wanted,” said the second-year life sciences undergraduate.

Noor Fatehah of NYP and Kang Pei Ling of Singapore Institute of Management (SIM) finished second and third with timings of 1:09.58 and 1:10.23 respectively.

When asked about her goals for the season, Celeste added: “I’ll definitely run more races this year. There’s always something to learn from every race run, so hopefully I’ll peak at Singapore Open and qualify for the ASEAN University Games.”

Celeste’s personal best in this event is 1:05.14 which she ran at last year’s Singapore Open, while she also holds the current National Schools A Division Girls’ record of 1:05.35.

Later in the day, the showdown in the Men’s 200m final saw a much tighter finish. The top four runners all finished in under 23 seconds with only 0.18 seconds separating the champion from third position.

Leading the sub-23 charge was 100m silver medalist Naqib Asmin of Singapore University of Social Sciences (SUSS), who finished in a timing of 22.22s. Dexter Lin of NUS finished with the silver in 22.34s, while Calvin Quek of Nanyang Technological University (NTU) claimed the bronze in 22.40s adding to his 400m gold medal the previous week. A 22.91-second run by Elgene Chng of NUS meant that he had to miss out on the medals in fourth.

The Women’s 200m final saw Gwendolyn Therese Lim of Temasek Polytechnic win in a timing of 26.54s while Rebecca Tay of NYP and Zann Oh of Republic Polytechnic had to settle for silver and bronze respectively. Gwendolyn anchored her school’s 4x100m relay team to a gold medal later in the day.