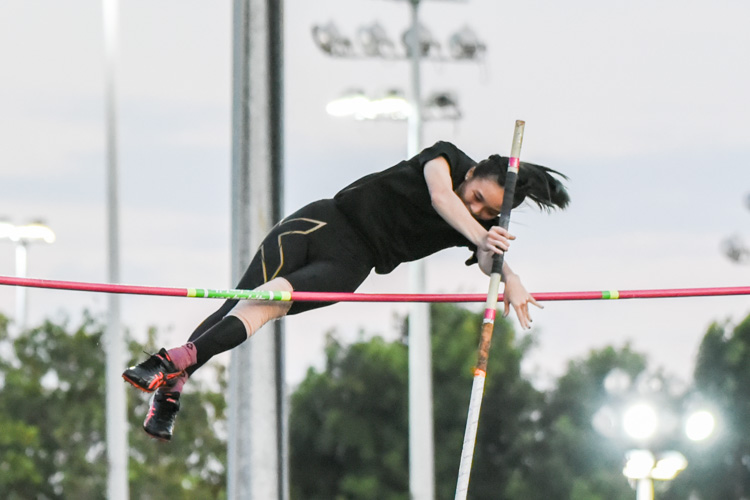 Lee Wen Qi of National University of Singapore (NUS) came in second with a jump height of 3.01m, while Joey Shi of Nanyang Technological University settled for third with her jump effort of 2.60m.

It was a neck-and-neck competition between Cherlin and Wen Qi, who both easily cleared 3.01m on their first attempt to successfully erase the old record of 3.00m set by Asmah Hanim in 2017.

For Wen Qi, who is also a debutant athlete in the IVP Track & Field Championships, her performance went beyond her own expectations.

“It was very unexpected as both of us are still training with injuries. So I came with no expectations,” she said.

After both jumpers had cleared 3.01m on their first attempt, Cherlin and Wen Qi went on to attempt a height of 3.20m. Eventually, Wen Qi settled for second after failing to clear the height on all three tries.

Despite her unsuccessful efforts in clearing 3.20m, Wen Qi remained optimistic till the end. She said: “I felt good. I got to go on a different pole, so personally, it was a big breakthrough.”

Easily sailing over the bar, Cherlin successfully secured the gold medal on her first attempt. Thereafter, she went on to attempt 3.30m but failed to clear the height on all three tries.

For Cherlin, who is currently recovering from an injury, her result came as a surprise.

“I am quite shocked, like it was unexpected, because I came with no expectations. I just wanted to jump a height, that’s all,” said the 19-year-old student, who also holds the Women’s National Under-18 and Under-20 record of 3.60m.

When asked about her future plans, Cherlin shared: “I actually plan to qualify for the Asian Junior Athletics Championship. I tried just now, but I didn’t make it. So maybe next time.”

In the men’s category, Chan Sheng Yao of NUS, who set the IVP pole vault record of 4.71m in 2018, clinched the gold medal after clearing 4.20m. Irvin Goh of NP settled for second with a height of 4.00m whereas Koh Wei Shien, also of NUS, came in third with a jump height of 3.20m.