Story and photos by Stefanus Ian and Iman Hashim/Red Sports 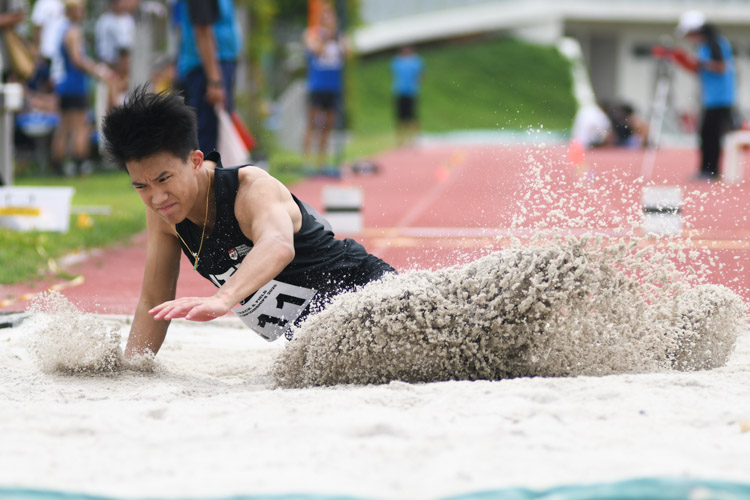 Interestingly, the victory was partly thanks to the advice from his competitor, Ivan Mun of Singapore University of Technology and Design (SUTD), said Ernest.

“Ivan was actually giving some advice to Shawn (Jong) at first, so I just casually asked if I could get some advice as well and he really came through to give me some advice with my jumps about my technique, and that really helped me,” explained Ernest after the competition.

“He told me to relax on my jumping day and focus more on my swinging legs instead.”

With that advice, Ernest eventually overtook Ivan’s 13.60m jump during his sixth attempt. When he landed his gold-medal-winning jump, Ernest said he felt “redemption” more than anything.

“It felt like redemption from the first jump as I finally got back to it,” said the 20-year-old medical undergraduate.

Ernest, who had previously won the A Division Boys’ triple jump title in 2017, said his first jump felt really good but he made a foul during his run-up.

“(The foul) kind of threw off my runs and threw off my jumps a little bit… so I had to work my way back slowly.”

Even after the final results were announced, the top three jumpers were still deep in discussion about how they could improve their performance and it is this nurturing environment among competitors that makes Ernest very thankful.

“I was very thankful for their advice and (the other jumpers) were very, very supportive as well,” added Ernest.

“I think it’s not so much about competition, but it’s really about just helping each other, helping the whole Singapore track and field scene get better.”

SUTD’s Ivan, who was competing with just running shoes instead of spikes due to an injury, clinched the silver medal with a final distance of 13.60 metres while two-time POL-ITE triple jump champion Shawn Jong of Ngee Ann Polytechnic (NP) rounded up the podium with a 13.50 metres effort.

The National University of Singapore (NUS) engineering freshman had earlier also won the high jump event with a best clearance of 1.53m, dethroning four-time IVP defending champ Valerie Cheong of SMU, and formerly of SP, after a countback.

After both girls failed at 1.56m, Valerie was resigned to the silver as she had taken three tries to clear 1.53m while Jezebel did so on her second attempt. Jezebel’s NUS teammate Nicole Sng took the bronze with a clearance of 1.50m.

“I wasn’t really expecting anything, I just wanted to do my best because I wasn’t sure where I was now,” said Jezebel, who was a three-time National Schools high jump champion and four-time triple jump champion while representing Singapore Sports School and HCI.

“I did pretty near my PB despite not training as frequently because of uni, so I would say I did decent and I’m satisfied with my performance,” she added.