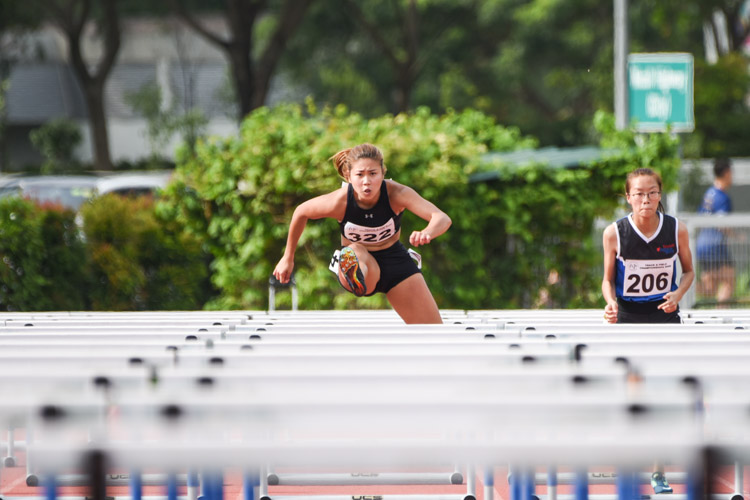 After clocking in at 15.82s in the heats, Kerstin went on to stop the clock at 15.61s in the women’s 100m hurdles final to comfortably win her first race of the season. It was the first time since 2016 that the women’s hurdles had enough participants for heats to be run.

“I think I did not do very well in the heats, so I am glad that I had a second chance in the finals to do better, but it’s the first race of the season, so there’s more to come,” said the 23-year-old undergraduate.

“I’m just glad I won for my school,” added Kerstin.

The women’s race got off on the wrong foot when Republic Polytechnic’s Rachel Chin, who qualified second fastest with 16.20s, was judged to have made a false start and was given the red card. With Rachel being disqualified, Ngee Ann Polytechnic’s Joanna Seet took home the silver with 17.12s and Emma Tan of National University of Singapore wrapped up the podium with a time of 17.48s.

In the men’s 110 metres hurdles event, Terence Tang of Singapore Institute of Technology bettered the silver he got in 2017 to clinch first place ahead of Nanyang Polytechnic’s duo of Isaac Toh and Silas Ng.

Terence’s time of 15.20s in the final race is the exact same time he got during his silver medal-winning run in 2017.

“I think it was a good race for the first race of the year… I actually hurt my foot about three days ago,” said the 23-year-old.

“So I was pretty sad about it because I wasn’t at my 100 per cent but I was calm, I was composed and I managed to execute my race well.”