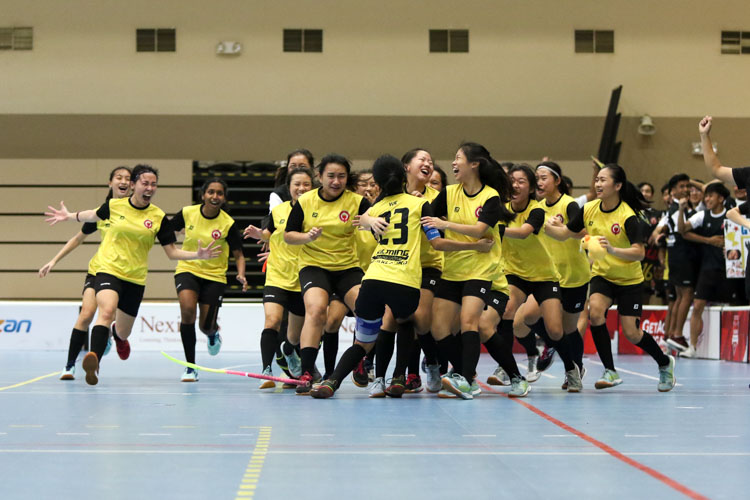 Our Tampines Hub, Wednesday, May 15, 2019 — It was a dream made reality. Victoria Junior College (VJC) came back from the brink of defeat to seize a 1-1 draw against River Valley High School (RV) in regulation time despite being down in the first period, and went on to reclaim the A Division Girls’ Floorball championship title after a penalty shootout. It was VJC’s first final appearance as well as first title since 2012.

While their goal was to make it to the final, VJC went beyond their expectations to deliver a stunning 2-0 result during the penalty shootout, with Megan Ng (VJC #45) and Caluza Denise Jazmine Carnate (VJC #23) scoring and ‘keeper Ulfah Irdina Bte Affandi (VJC #25) keeping out the opposition’s penalties, just like she did in the semi-final against Tampines Meridian Junior College.

“I couldn’t be any more grateful and proud of the girls,” shared team captain Denise (VJC #23). “All those late nights and early mornings sacrificed for training were worth it and I couldn’t be happier.”

The fight between VJC and RV was not a total domination by a single team, as the first period saw the best efforts from RV, of which VJC’s players were unable to counter.

Any attempt to attack by VJC were immediately shut down by RV’s defenders Seow Jing Ying (RV #18) and Joanne Tan (RV #99). RV’s solid defense structure refused to break throughout the period, and this prevented any successful goal attempts by VJC, especially by centre Mavis Ng (VJC #34), who tried many times.

The first goal came through Joanne (RV #99), who took the free hit after an out-ball. The shot went straight into the net, ending the period with a scoreline of 1-0.

“We were insecure about the game knowing that we lost to RV before in the group stage,” added Denise (VJC #23). “However, after a motivating talk by our coach during the period break, we managed to get our heads back in the game and come back with fire as a team.”

The second period was a sure testimony to her words. Due to foul play, VJC had to spend two minutes in court short of a player. However, they continued to keep their heads up and hearts hungry.

They demonstrated a composed structure and held ball possession during the two minutes. While box play was a mostly defensive formation, VJC defied all odds when they began to continually send the ball down court with the intention to score a goal.

The effort proved to be worthwhile when Chan Jing Xuan (#24) received a corner ball and tapped the ball in to score an equaliser. This left RV to be the ones that struggled to hold their ground through the remaining period.

While no goals were scored in the third period, it saw the best efforts from both teams.

“Both teams definitely put up a good fight and in the last period, both teams were hungry for the ball,” acknowledged Joanne (RV #99). “I think it was a valiant effort from both teams to hustle for every ball to regain possession.”

Regulation time ended with a 1-1 draw to commence the penalty shootout. At that moment, tension began to build throughout the hall as the spectators grew quiet.

“We went into penalties knowing we had already done what we could, all we had left to do was stand together and put our faith in our keeper, Ulfah (VJC #25), and our penalty takers, cheering them on in our hearts,” said Denise (VJC #23).

While saving every other shot, Toh Jun Rong (RV #57) was unable to deflect the balls that were delivered by Megan (VJC #24) and Denise (VJC #23), where their individual skills allowed successful trick shots. VJC’s keeper Ulfah (VJC #25) was on top of her game to prevent any goals from being scored on her end.

Despite the loss, Joanne (RV #99) continued to share the message of true sportsmanship: “Regardless, the fight was a team effort, we win some, we lose some, and that is what sports is about.”

“We came a long way to build up the camaraderie in the team, pushing through each training. Coming into this competition, we wanted to earn back the title. It may have been a loss, but we continue to look ahead.”