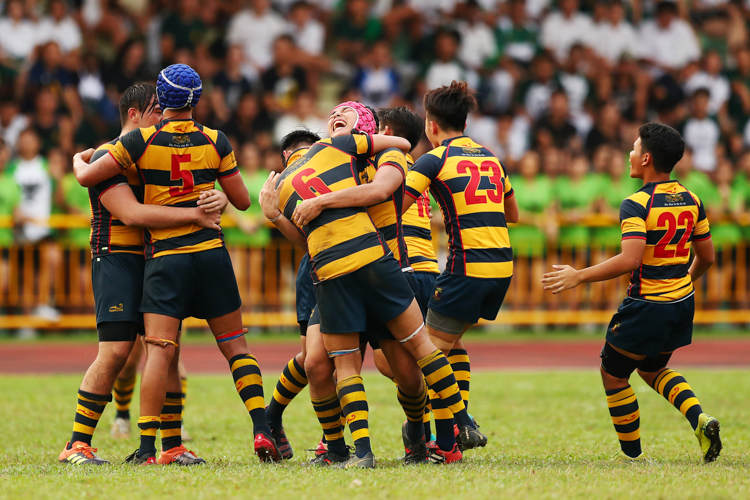 ACS(I) players celebrate their victory against RI during the final of the National Schools A Division Rugby Championship. (Photo 1 © Lim Yong Teck/Red Sports)

Queenstown Stadium, Thursday, 16 May 2019 — It must have felt like deja vu for captain Lam Wei Xuan and his Anglo-Chinese School (Independent) teammates, as they found themselves down 7-8 against Raffles Institution midway through the second half in a scrappy National Schools A Division Rugby Championship final.

RI had capitalised on their numerical advantage after ACS(I) in-centre Elroy Jahja-Loo was sin binned for a high tackle. Bervyn Wong scored the ensuing penalty and RI captain Gideon Kee finally crossed the ACS(I) whitewash for a try as the Rafflesians edged ahead for the first time in the match.

“That was a slip of concentration,” said Wei Xuan, a final year student. “But it’s our last game. 10 years of schoolboy rugby came down to this, it would not have been right to let this slip.”

The response from the five-time defending A division champions was swift.

ACS(I) earned a penalty from the restart, giving the opportunity for fullback Aran James Willets to kick the ball out for a line out. From this, ACS(I) regained possession and after a sequence of picks and drives, Tim Nijhof claimed the final touch amid the flurry as the ACSians drove the ball past the try line for their second try.

Aran then converted to give ACS(I) the 14-8 lead they never relinquished — a result that gave his school a sixth-straight A Division title, just shy of the record seven uninterrupted titles that Raffles Junior College bagged between 1990 and 1996.

“I’m just happy we made it through, we knew it was not going to be easy,” said head coach Adrian Chong. ACS(I) had taken the early lead after fly half Matthew Lim drove to the RI line following a series of courageous carries by the ACS forwards, a try that Aran subsequently converted as ACS(I) led 7-0 at half time.

“The fact that the boys have done this before certainly helps,” added coach Adrian. “But credit to RI, they defended really well today and read what we were trying to do at the start.”

Thursday’s A division final though, bore a striking parallel to the B Division final two years ago. Wei Xuan and his teammates found themselves similarly a point down against the Rafflesians at the same juncture of the match after having taken a half time lead.

But just as they stormed right back to break the hearts of the Rafflesians then, Wei Xuan and his ACS teammates hit back immediately in this year’s A Division final.

“We have to give it to ACS,” said RI head coach Mark Lee. “Each time they had an opportunity, they scored and made it count.”

RI let slip an opening for an early lead in the first half when scrum half Bervyn missed a penalty from within ACS(I)’s 22 from an acute angle. On top of the missed conversion after their second-half try, RI were also unable to make more of their drives to the ACS(I) line count.

RI also played various parts of the second half with a player down. Muhammad Wafiq (#12) and Ho Kai En (#16) were yellow carded for dangerous tackles, which meant they had to each sit out 10 minutes of match play.

Still, it was not for the lack of effort. The Rafflesians, with captain Gideon standing out on the day, varied their play by kicking the ball into the ACS(I) 22 on a few occasions, with the aim of putting the ACS(I) backs under pressure.

“The key thing was our defence, which we did well today,” said coach Mark, who identified his team’s defence as a key area for improvement after they lost 39-7 to ACS(I) in the preliminary round-robin match. “We had a lot of the ball today, but we left a lot of points on the pitch.”