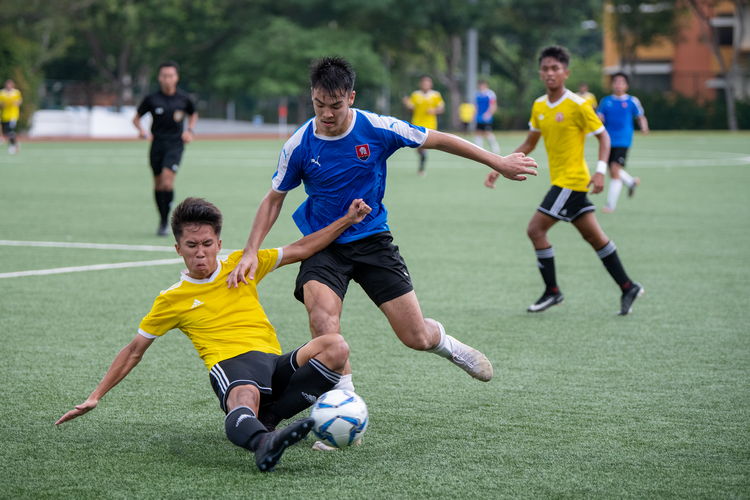 Despite the lightning alert disrupting the game roughly halfway into the second half, VJC and NYJC managed to finish their match after a short delay. In this picture, Artemus See (VJC #19) slides to tackle Vasileios Chua (NYJC #9). (Photo 1 © Jared Khoo/Red Sports)

“I feel like it was a good game performance and we really showed that teamwork and hard work can bring us through anything,” said VJC captain Jeremy Loke (#4).

VJC scored one goal in the first half to gain a slight lead, thanks to Haikel B Zaini (VJC #11).

Both keepers performed exceptionally well. In the fifth minute, Nanyang keeper Shane Lau (#1) caught a shot mid-air after a VJC corner kick into the box. At the other end, VJC keeper Wong Yi Hong (#1) also made impressive saves. At one point, he dove to one side, barely managing to deflect a ball into the post, where it bounced out towards the sideline.

At the end of the first half, the game was still quite close with the score at 1-0. But it was all set to change in the second half.

Just six minutes after play resumed, Haikel scored another goal to double VJC’s lead. Unfortunately, in the 63rd minute, the lightning warning system was activated, and the game was temporarily stopped.

When the game restarted, VJC immediately sprang into action. Six minutes in, the referee awarded VJC a direct freekick after an NYJC player fouled one of his opponents. Umar B Sharin (VJC #10) took a shot and scored a beautiful, top-right corner goal, increasing VJC’s lead to three.

Despite the overwhelming odds, NYJC never stopped trying to overcome their deficit. However, their efforts were in vain. In the 75th minute, substitute forward Oliver Lim (VJC #2)’s sealed the win with a shot that sneaked past the Nanyang keeper, marking the game’s fourth and final goal.

“I’m not even an actual striker, so the fact that (coach) played me up there was a bit surprising in the first place. He just wanted me to press down the opponents,” explained Oliver.