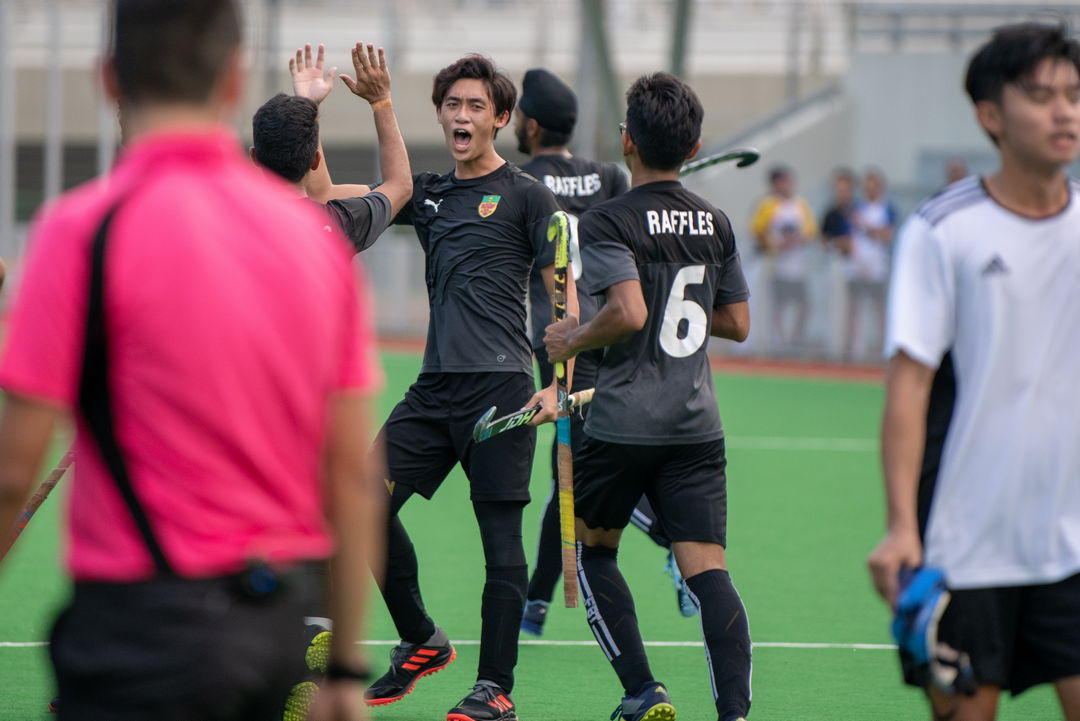 Sengkang Hockey Pitch, Friday, May 3, 2019 — Raffles Institution (RI), having previously defeated St. Andrew’s Junior College (SAJC) in the preliminary group stage, met them again on Friday to compete for the title of A Division Boys’ Hockey Champions. RI successfully defended their title in a convincing 6-0 win against the Saints, a testament to their absolute dominance in the competition. Raffles faced little resistance throughout the season with a total of 40 goals scored and zero conceded.

“I think it went well today ’cause I think our team played together. There was no individual: we all played as one, and as one family. So I think it really went well, and it was a really good final game for us J2s,” said Raffles captain Raziq Noor (#9).

Raffles’ first match of the year was also against SAJC. Then, they defeated the Saints 2-0 with the help of star player Akash Chandra (RI #82). At the time, Raziq explained his team had the expected “first game jitters” and promised they would “learn from [their] mistakes, improve [themselves], and come back stronger.”

Over the matches leading up to the final, the gryphons in green-black-white gained momentum from the one-sided scorelines. Raffles defeated SAJC, St. Joseph’s Institution (SJI) and Millennia Institute (MI) seemingly without breaking a sweat. In the semi-finals, they eliminated Anderson-Serangoon Junior College (ASRJC) ten-nil.

“We expected Raffles to be in the finals and that they would be a tough team to beat. However, we were determined and ready to challenge ourselves as we had already played Raffles in the group stage and knew what we were going up against,” said Nashwyn Singh (#6), the Saints captain.

A foul-up on SAJC’s part during the short corner prompted the umpire to award Raffles another short corner. Raziq flung the ball to Alton Chua (RI #10), who took a shot. Saints keeper Andrew Chua (#16) saved it, but the ball bounced back into play. Khairul Irzhan (RI #99) dribbled to the right of the Saints’ goal before accurately slotting it into the goal to put Raffles in the lead.

Five minutes later, a pass came in out of the blue through the line of Saints defenders from midway up Raffles’ left flank to a waiting Kevin Saji (RI #13) at the Saints’ right goalpost. He gently tapped it in, scoring Raffles’ second goal of the game.

Thus, the first quarter ended two to nothing in favor of Raffles.

Luck was not with the Saints. While their keeper made an outstanding save — diving to block a shot before rising again to smack away another attempt immediately afterwards — an accidental kick by one of the Saints gave Raffles another short corner.

Raziq, on the goal line, passed to Alton, at the edge of the Saints’ semi-circle, who pocketed the ball into the Saints goal to take Raffles to 3-0.

After his team’s semi-final match against ASRJC, Raziq expressed hope for his team to be more clinical in front of goal. Indeed, even when tackled in the Saints semi-circle, the Raffles players maintained their cool and methodically looked for new opportunities and openings, as opposed to blindly trying to assault the Saints defense. All remnants of their “first game jitters” had long disappeared. Raffles had their basics right: their touches were efficient and allowed them to play the ball without delay.

Akash, usually known by his Raffles teammates as a playmaker, applied a great deal of pressure to the Saints defenders, charging at each one as soon as they received the ball, forcing the Saints defenders to think and act fast. His aggressive strategy came through when he stole a ball in the 22nd minute and passed it to Kevin Saji (RI #13), who in turn earned Raffles a short corner, though the team failed to convert it into their fourth goal.

The second quarter ended 3-0 to Raffles.

Three minutes after the third quarter commenced, Akash managed to bring the ball all the way to the Saints semi-circle, where he made an attempt at goal. To the dismay of the watching Raffles spectators, he narrowly missed it, though his effort elicited cheers from the crowd.

But the hundreds of Raffles spectators watching would not be disappointed for long. In the 42nd minute, Raffles obtained yet another opportunity to score a goal. This time, instead of Raziq on the goal line during the short corner, Haikel B Yassin (#66) opted to assume the role.

The sound of drums and cheering faded as silence settled. The umpire’s whistle broke the brittle quietness and Haikel swung his stick, dragging the ball and releasing it on a path to Alton. Alton passed to Justin Lee (RI #12). Justin passed to Haikel. And Haikel passed to the Saints goal, earning his team another point.

No further short corners were awarded or goals scored in the third quarter, so it ended Raffles four, Saints zero.

More of the same in the final quarter: five minutes in, Akash drag-flicked the ball into one of the upper corners of the Saints goal, bringing the scoreline to 5-0.

The crowd provided some entertainment. Saints nearly scored a goal against Raffles; had the shot been but a few centimetres closer to the target, the ball would have gone in. Instead, it struck the goalpost, making an audible sound. Thinking their school had scored against Raffles, the Saints spectators let loose the loudest cheers of the game. Even the scoreboard operator was temporarily fooled, displaying 5-1 on the scoreboard. The issue was quickly rectified, though not before a score of 5-2 was briefly erroneously displayed, much to the amusement of several onlookers.

In the 57th minute, with the scoreboard rightfully displaying 5-0, Akash scored his second goal of the game to bring Raffles to their final score of 6-0.

Even faced with certain defeat — three minutes on the clock and six points behind — the stubborn Saints refused to surrender, fighting with all their heart and strength. Shouts of encouragement and instruction could be heard from the Saints coaches and benched players. Even though they had lost the game, they refused to lose their spirit.

Reflecting on his team’s performance this season, Saints captain Nashwyn said: “I am very proud of the team’s progress this season, as it was our first final since 2010. We achieved our objectives as a team and ended the season satisfied.

“Raffles played very well by preventing us from building out of defense and they deserved to win that match, but I’m very pleased that we did not give up and kept trying to get more attacks even in the closing seconds of the match.”