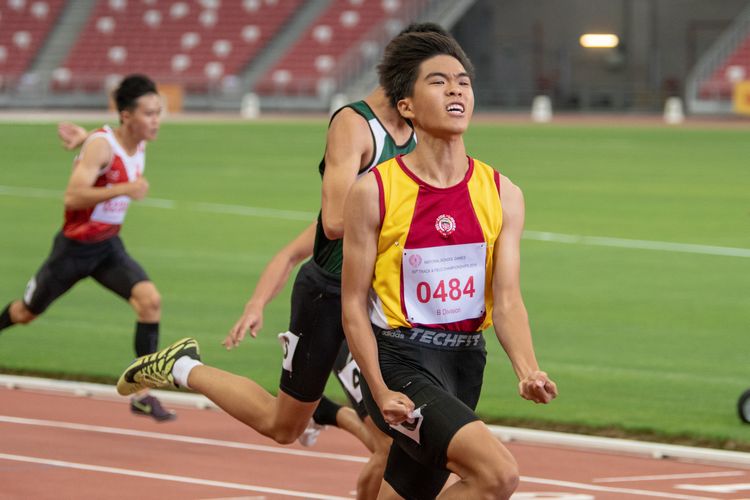 Singapore Sports Hub, Thursday, March 28, 2019 — Victoria School (VS) made it two in two at the 60th National Schools Track and Field Championships, clinching the gold medal in both the C Division Boys’ 100-metre Hurdles and B Division Boys’ 110m Hurdles finals through Simon Azulay and Gabriel Lee respectively.

Both finals saw tight finishes, with the winning margin over the runner-up a mere 0.05 seconds in the C Division final and a tenth of a second in the B Division race.

In the C Division final, Victoria School’s Simon Azulay had to overcome the challenge of Jordan Tan of the School of Science and Technology (SST).

“Going into the race, I was actually nervous, but I tried to stay confident,” said Simon.

The two boys sped past the other competitors, to what seemed like a photo finish. However, Simon emerged the victor with a timing of 14.62 seconds, an improvement of his previous personal best, a timing of 14.96s achieved in the heats.

Trailing just ever so slightly behind, Jordan was left to settle for silver, with a time of 14.67s.

Speaking about his win, Simon said: “I’m quite happy with my performance today, but going into the competition I knew it was going to be a tough fight with my competitor, Jordan. I just tried my best.”

Having finished in seventh place in last year’s final, the win was a momentous one for the Secondary Two student.

“I don’t remember clearly, but in the last stretch I just ran as hard as I could to the finish line,” Simon reflected on his race.

Having had such a drastic improvement in his showing this year, Simon was grateful for the people that had been there for him in the past year.

“I’d like to thank my coach, teammates and parents for supporting me throughout my VS track and field journey,” he quipped.

The B Division Boys’ final proved to be another tough fight for the gold and silver medals. This time, it was between Gabriel Lee of VS, Aloysius Chia of Catholic High School and Wellington Ho of Raffles Institution.

Gabriel came from behind to fly past Aloysius in the second half of the race, crossing the finish line just 0.1 seconds ahead of his competitor with a time of 14.89s. This was an improvement from his previous personal best of 15.04s which he clocked in the heats. Wellington came in another tenth of a second behind Aloysius to claim the bronze.

Gabriel said: “I feel happy about my performance today. I was quite confident as I qualified first but was still a bit worried at the same time. My goal today was just to finish the race and not to slow down.”

The 16-year-old attributed his success in today’s race to the confidence boost he got from winning the triple jump event just two days earlier, where he set a new championship record. His winning jump of 14.29 metres rewrote the old B Division boys’ mark of 14.27m, set by Singapore Sports School’s Dylan Wong in 2014.

Gabriel is the first boy to achieve the sprint hurdles-triple jump double since Damian Pang of Chinese High School did so in the C Division, way back in 1988.

“I felt really happy that I was able to come in first and break the championship record,” said Gabriel. “It definitely made me feel more confident about today’s race and eventually allowing me to win it as well.”