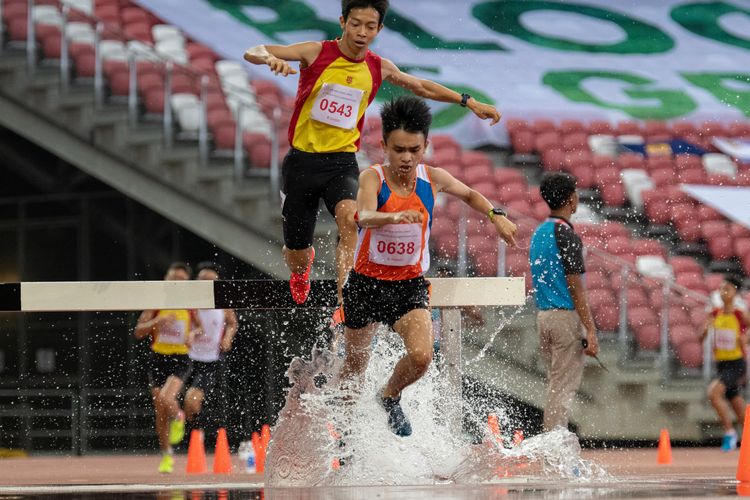 National Stadium, Thursday, March 28, 2019 — Stopping the clock at a personal best of 6 minutes and 54.53 seconds, Loh Wei Long of Yuan Ching Secondary (YCS) stood tallest atop the podium among the traditional powerhouses of track after taking on the B Division Boys’ 2000 metres steeplechase final at the 60th National Schools Track and Field Championships.

This was only the second time that Wei Long has competed in the steeplechase but he remained unfazed as he seized his first individual gold — which was also the only gold that Yuan Ching Secondary garnered at the meet — while breaking his personal best which was set at 7:02.17 during the heats.

Aeron Young and teammate Jonathan Yeong of Hwa Chong Institution (HCI) finished seconds behind the victor with timings of 6:58.49 and 6:59.39 respectively, clinching silver and bronze for their school.

“I felt quite nervous before the race, as it was my second time running the 2000m steeplechase,” he said. “But I was confident that I could clear the barriers without any problem. So I took the lead with three laps to go and increased the pace.”

During the last three laps, Wei Long powered through the track and over the steeples, forcing a sizeable gap between himself and the rest of the pack.

Such a feat was a testament to his perseverance over the years of preparation and training, where he was adamant in pursuing his goals.

“This is my first time winning in a National Schools event, and I didn’t expect to come in first. I just wanted to give my best,” he said.

“During the final lap when my legs were tired, all my mind could think of was all the hard work that I have put in training,” added Wei Long.

For Wei Long, his journey does not end here, as he hopes to continue taking part in future steeplechase events but first he will be gearing up for the upcoming National Schools Cross Country Championships.