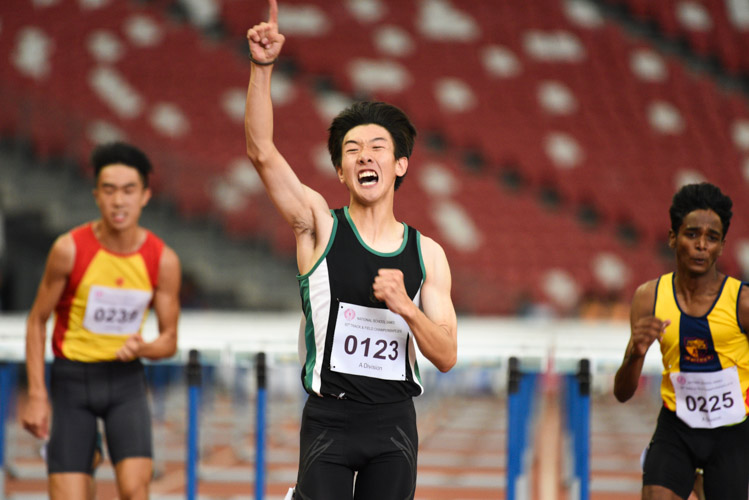 National Stadium, Thursday, March 28, 2019 — In his first three years of competing at the National Schools Track and Field Championships, Matz Chan had never failed to clinch at least one gold medal between the two hurdles events, even claiming the C Division 100m-400m hurdles double in 2016.

So when he lost both hurdles titles last year to then-Anderson Secondary athlete and newly-minted 110-metre hurdles under-18 record holder Marc Brian Louis, Matz felt he was ready for a change.

The fifth-year Raffles Institution (RI) student, “bored of doing the same routines” and “wanting to try something different”, even contemplated quitting track and field, and eventually made the switch to long jump training to rediscover his passion for the sport.

An adductor injury also made matters worse, and led him to stay away from hurdles training going into the start of the year.

“This season has been an extremely tumultuous one,” said Matz. “This entire season was mainly devoted to the long jump event, and I only started focusing on both hurdles in mid-January when I found out that the school had enough long jumpers. For the 110m hurdles event, I went in mainly with the goal of completing the race smoothly.”

Yet, Matz showed no signs of rust when he came out tops in the A Division boys’ 110m hurdles final with a time of 15.70 seconds, adding to his 400m hurdles win three days earlier to effectively seal his second hurdles double at the annual schools meet.

It was also only his second meet competing with the taller 0.991m-high hurdles in the 110m race, with his maiden attempt coming only last month at the Singapore Athletics Schools Episode 3.

For the 400m hurdles event, it was his first meet racing with the 0.914m-high hurdles, but that did not stop him from claiming another convincing win in 57.25s, securing his fourth title in five years in the event.

“I think I made the most out of the short period of time and I believe that a lot of improvements can be made,” Matz reflected. “I feel that I underperformed for both races but nevertheless, I am thankful for this opportunity to compete and glorify God.”

When asked about his confidence going into the competition, he added: “There are no supposed (favourites) because anything can happen in a race. Every medal comes with hard work. I started late this season, and my adductor injury put me under intense pressure and stress to even complete the race.

“Every race, I strive to do my best. I think that the medals are all just a by-product.”

In both events, Matz’s long-time rivals Jered Wong, also of RI, and Gerard Emmanuel Loh of Hwa Chong Institution figured in the medal chase. Jered came in second in both to ensure a double 1-2 finish for RI, while Gerard finished third in the 400m hurdles and fifth in the shorter event, as Solaimuthu Dhanabalan of Anglo-Chinese Junior College took the bronze.

“I am extremely honored and grateful to compete with Gerard and Jered,” said Matz of their friendly rivalry. “They are both very talented and hardworking individuals and we never fail to push each other to our limits. I wish Gerard all the best in his future endeavors and hope to compete with both of them soon.”

Giving his thanks, Matz said: “I want to express my deepest gratitude to my coaches, Melvin Tan and Kamarul Zaman Tahir, my family who is my greatest pillar of support, my teammates and friends. Most importantly, God.”