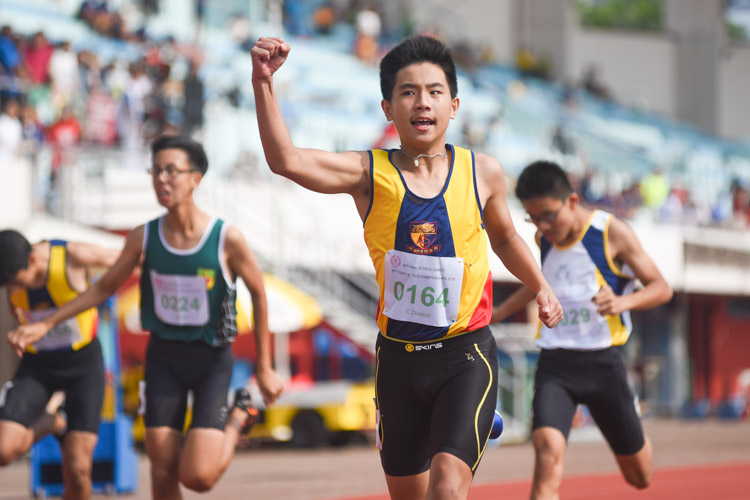 The Secondary 2 school student did not disappoint, clinching the C Division boys’ 200 metres gold with a time of 24.03 seconds.

“Last year during the SPH Relays, I got injured during the 4x200m relay,” shared Xavier. “I couldn’t train much, and I had to go for a lot of physiotherapy. As a result, I did not start any of my races last year.”

Speaking about his race performance, Xavier said: “I felt that I did not start off very well, as I felt that the blocks were really slippery. As such, I did not feel so good at the beginning. However, I just listened to my coach’s advice to stay loose and go hard.”

Isaac Koh of Raffles Institution stopped the clock slightly more than half a second after Xavier, finishing with the silver in 24.59s. Augustus Tay of Catholic High School took the bronze medal with a timing of 24.64s.

Xavier sheepishly added: “I honestly did not expect my results today. Having qualified third in the heats, I wasn’t confident of my performance.”

When asked if he was looking forward to moving up to the B Division the following year, Xavier expressed his excitement in being able to compete against his fellow ACSian, Mark Lee, who finished second in this year’s B boys race.

Xavier also had nothing but praise for his fellow competitors, saying: “They were all very good, and very friendly as well. Before the race, they tried to calm everyone down, so that was very good and nice of them.”

“I would like to thank my coaches especially, as well as my physiotherapist, and not forgetting my friends as they cheered me on today,” he added.

With a win under his belt, Xavier looks to repeat the same feat in the 100m final, as well as representing ACS(I) in the relay finals to be held at the Sports Hub.