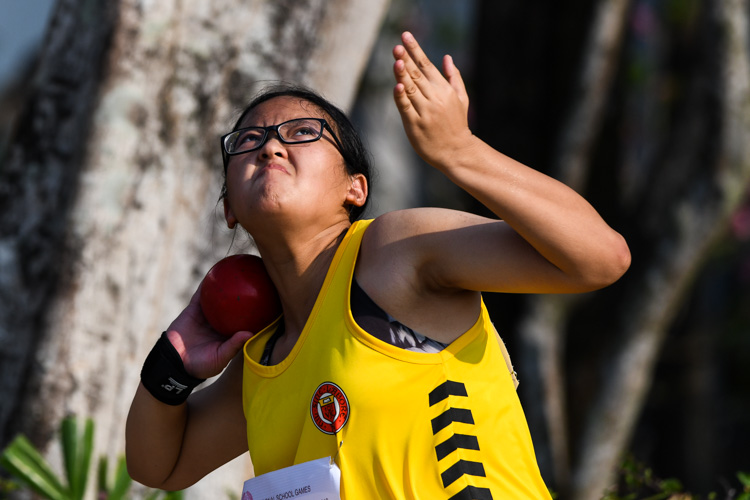 Wong Rui Yue of VJC came in first in the A Division Girls Shot Put event with a final distance of 11.09m. (Photo 1 © Stefanus Ian/Red Sports)

Choa Chu Kang Stadium, Monday, March 25, 2019 — Wong Rui Yue of Victoria Junior College (VJC) came into the shot put competition aiming for a personal best (PB), but she definitely did not expect to achieve it with only her third throw of the competition.

The 17-year-old student said that getting her 11.09m personal best so early in the competition was “weird”.

“I had to get back and hurry up and don’t celebrate so much and go further.”

Rui Yue’s coach had set her the goal of bettering her PB this year and although the first time gold-medallist achieved it, she wished she could be more consistent.

“I also want to reach (my personal best) but her setting a goal makes it more like (I have to) do it,” said Rui Yue.

“Most of the things went quite well but I wish I was a bit more consistent.”

Rui Yue edged out last year’s bronze medallist Jasmin Phua from Hwa Chong Institution who threw 10.82 metres. VJC’s Anna Yap then rounded up the top three with a final distance of 10.50 metres to clinch the bronze this year.

In the other field events that day, Raffles Institution’s (RI) Ryan Ng came out on top in the A Division discus throw event with a final distance of 44.68 metres. The second-year student, however, admitted that he did not do as well as he had hoped.

“Performance-wise, it was not that good. But well… my fellow competitors also faced the same thing,” said Ryan after the competition.

The RI student said he felt he would have been able to perform better if the national track and field competitions were held in April — as was the case in last year’s edition.

“Normally, we have like three series and then we have National Juniors U20, U18 but this year we have… one less competition so to say,” said the 17-year-old.

Similarly like the A Division Girl’s Shot Put event, Raffles secured a 1-3 finish with Matthew Lee clinching bronze with a final distance of 41.34 metres. Thierry Ong of Anglo-Chinese School (Independent) prevented a top two sweep for RI with a 43.00 metres throw that clinched the silver for him.