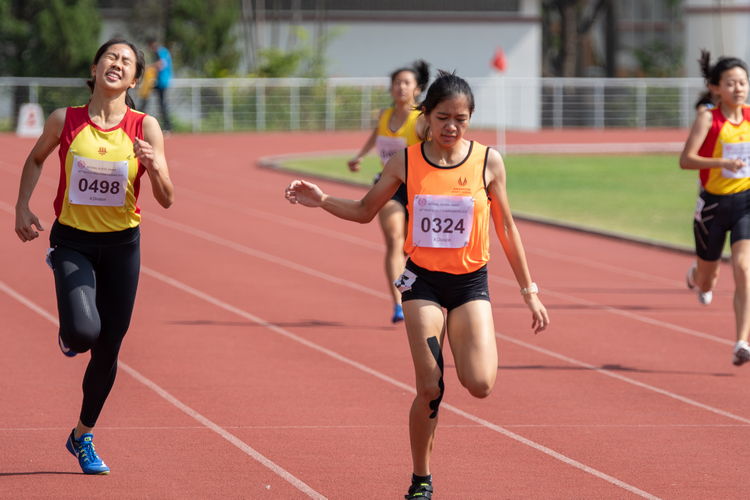 Choa Chu Kang Stadium, Friday, March 15, 2019 — Going into the A Division girls’ 400 metres final, a massive winning streak was on the line for Diane Hilary Pragasam.

The final-year Singapore Sports School (SSP) student had won the one-lap sprint for five years in a row at the annual National Schools Track and Field Championships, dating back to her C Division victory in 2014.

“I think the pressure was definitely greater, it felt as if my six years of track just boiled down to that one race,” Diane said.

“I think before my race I probably thought about running it at least a hundred times everyday, just to make sure that when it boils down to that moment, at the start line, I am still calm and ready to give it my all.”

And gave it her all she did, making it six 400m golds in as many years with a new personal best of 61 seconds flat. It was four hundredths of a second faster than her previous best mark of 1 minute 1.04 seconds, clocked when she won B Division gold two years back.

The journey certainly was not easy — Diane revealed she has had to overcome a recurring knee problem which has bugged her for around four years.

“It’s definitely challenging to work around the injury,” she explained. “Especially for sprint events, you need a lot of plyometrics and constant speed work, so it was quite challenging to still gain the amount of strength that others could gain easily.”

Diane’s winning streak was almost threatened in the latter stages of the race, when Hwa Chong Institution’s Amanda Ashley Woo came breathing down on the final straight. Amanda eventually finished close behind in second, stopping the clock in a huge personal best of 1:01.36.

Though Amanda greatly improved on the 1:02.71 she clocked last month at the Schools Episode 3, it was not enough to overhaul perennial rival Diane, whom she has been racing with for the past five years.

“I’ve been running with Diane for quite a while, and she’s someone I really look up to,” said Amanda, formerly of Nanyang Girls’ High School (NYGH). “So at the end of it all, it’s nice that we finished it together.”

The result mirrors that of last year’s A Division final, where both Diane and Amanda also placed in the top two positions. In 2016 and 2017, Amanda had finished fourth behind Diane in the B Division.

“I really want to praise God and thank my teammates and my coach,” added Amanda on her personal best effort. “It’s just something that I’m very grateful for, because I just wanted to try my best and see how everything turns out.”

Amanda will next look to retain her title in the 400m hurdles, of which she has qualified fastest for the final. For Diane, the 200m final looms, where she will hope to improve on her bronze medal result from last year.

Both girls will likely meet again in the relays, where Diane’s SSP team will be a makeshift one with athletes borrowed from the school’s other sports teams.

As Diane put it, she is not alone in her track journey.

“I’m not only doing it for myself, I’m doing it for my school and my family,” she said. “These are the two main platforms that have supported me throughout the six years.”