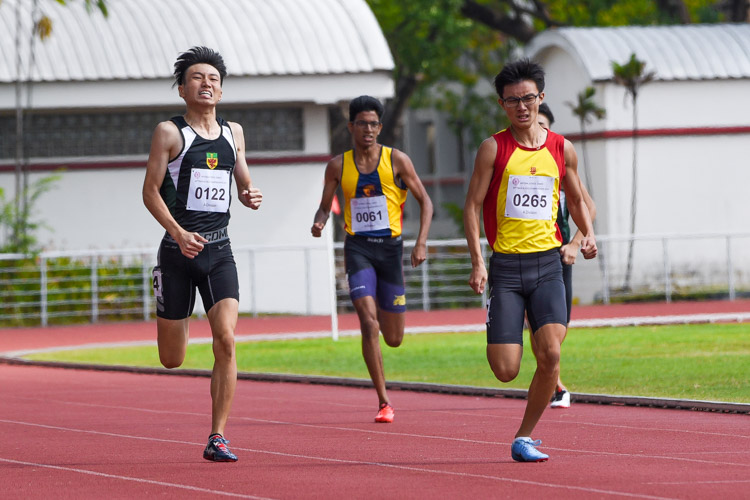 Choa Chu Kang Stadium, Friday, March 15, 2019 — A bad back injury which lasted eight months forced Sin Ming Wei out of his pet event, the sprint hurdles, three years ago. But it turned out to be a blessing in disguise.

“That was when I realised I’m not cut out for hurdling because my injury stemmed from hurdling,” said the Hwa Chong Institution Year 6 student. “Afterwards, I decided to try out 400 (metres), because back then I wasn’t that of a strong starter, so I wasn’t really that suited for the short burst events.”

“I think I had potential (in the 400m) and basically my coach and my teammates continued supporting me, and that’s where I am today.”

And where he is today, is atop the A Division boys’ 400m podium.

In a tight race, he stopped the clock first in a personal best 51.45 seconds, finishing just 0.13s ahead of runner-up Samel Sahil Chetan (51.58s) of Singapore Sports School. Bronze medalist Marcus Tan of Raffles Institution was not far behind, clocking 52.03s.

Ming Wei’s winning time bettered his previous best mark of 52.18s set in the semi-finals. Though he had qualified fastest for the final, Ming Wei said the victory was an unexpected one.

“To be frank, there was a lot of uncertainty behind this (race) lineup,” he explained. “Everyone’s timings were rather close, so we knew we shouldn’t be complacent, and to just do our best. To be honest I wasn’t very confident of getting onto the podium, let alone the gold. I just wanted to give it my best shot.”

“So basically when we approached the last stretch, I just kept telling myself the pain is temporary, so I just had to push and give it all I have.”

Ming Wei’s victory sees him clinch his maiden individual medal at the annual schools meet, and fittingly so in his last year competing for his school.

“I would have to say it was a phenomenal experience,” he said. “I first joined track when I was in Secondary 1, so it’s been a total of six years and I’m really glad to have ended it off on a high note, because to be honest I’ve been faced with countless setbacks such as injuries.”

“A couple of weeks back I was down with a hamstring injury, but we had to make the best out of our circumstances. So I just tried to focus on recovery, and I’m glad that everything turned out well,” he added.

Ming Wei maintained that there was no secret behind his rapid progress in the event apart from consistent hardwork, and that his support network played a huge role.

“It’s just about being committed to training sessions, adhering to the instructions given by my coach and of course to always have the mindset that your teammates have your back and they are supporting you,” he said.

“Basically I feel that the external motivation comes from my friends, and there is also my intrinsic motivation to do well. So I believe these two aspects served as a driving factor that allowed me to make such a remarkable improvement.”

Ming Wei will next compete in the 200m final and the relays.