National B Div Hockey: Saints edge out Sengkang as both sides enter semi-finals 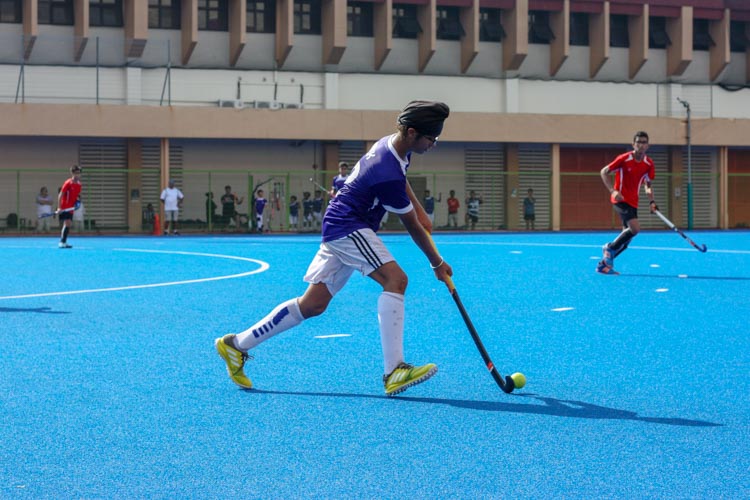 Harek Singh Mehta (SAS #12) controls and dribbles the ball as he makes his way up the pitch. (Photo 1 © REDintern Jordan Lim)

With this result, SAS improves to a 1-0-1 win-draw-loss record, while SKS drops to one of 1-1-0. Both sides have booked a berth in the semi-finals.

SAS fullback Jonathan Stewart (SAS #8) said: “In previous matches, our defensive mistakes had cost us badly. So for this match I’m really proud that we kept a tight, solid defensive line, which was key for us to survive their attacks and hold on for victory.”

It was SKS who threatened first, as Syazwi Zufayri Bin Yusri (SKS #17) and Supaya Saran Raj (SKS #10) combined on a fast-break to force the SAS goalkeeper into making a close-range save.

Meanwhile, SAS pressed high up the pitch in search of an opener, and this allowed them to win a succession of penalty corners.

Harek Singh Mehta (SAS #12) came especially close to scoring from a corner as he fired a sweep-shot just wide of the goal-frame.

As time ticked on, both sides settled into their own attacking strategies, with SAS holding possession in the final third of the pitch, while SKS relied on counter-attacks.

Yet, it was the effort of SAS which eventually paid off as they drew first blood just past the 15th-minute mark.

Joshua Eng (SAS #9) had a slap-shot saved by the SKS goalkeeper, yet Mervylen s/o Ramesh (SAS #11) was on hand to slot the rebound under the goalie and into the net.

This strike caught SKS off-guard, and they were unable to muster a response to penetrate the SAS defense, and the half closed out at 1-0.

As the second-half resumed, instead of sitting on their lead, SAS came charging forward, seeking that vital second goal to seal their victory for good.

Jonathan Tan (SAS #18) nearly did just that, as he jinked and slalomed his way past three defenders, before Julian Chung (SKS #27) blocked his shot.

Facing the SAS onslaught, SKS needed the calm Dhinagran Nair (SKS #2) to steady the ship and build up attacks with his patient passing strategy.

In spite of this, the SAS guard refused to buckle, and led by Nathan Devavaram Theodore (SAS #20), they worked tirelessly to pull out last-ditch tackles.

Remarkably, Nathan even showed glimpses of attacking prowess too, as he slammed a tomahawk shot just over the crossbar from a penalty corner.

As the the full-time whistle loomed nearer, the desperation for an equalizer grew among the SKS players as they poured numbers forward in attack.

SKS won a stream of free-hits around the “D” area, and these presented their best opportunities for drawing level.

Dhinagran and Akmal Rifqi B Kamal Rudin (SKS #7) especially stepped up, as they fired a continuous barrage of shots from long-range.

These efforts were just barely blocked by the lunging sticks of the frantic SAS defenders.

And this battle reached its climax in the final minute, as Raj exposed a gap in the opposing defense, and arrowed a powerful sweep-shot goal-wards.

However, it was not to be a heroic ending for SKS as the SAS custodian dived brilliantly to save the ball and keep his team’s lead intact.

This sealed an upset 1-0 victory for the brave SAS youths over an SKS side that by no means went down without a fight.

Raj, captain of SKS revealed this in hindsight: “Unfortunately, we underestimated SAS based on their previous results, and were thus too relaxed. But from now we will treat each game like a final and come back to try fighting harder than ever to try and clinch the title.”

Both SKS and SAS will now play in semi-final fixtures with dates and venues to be announced.