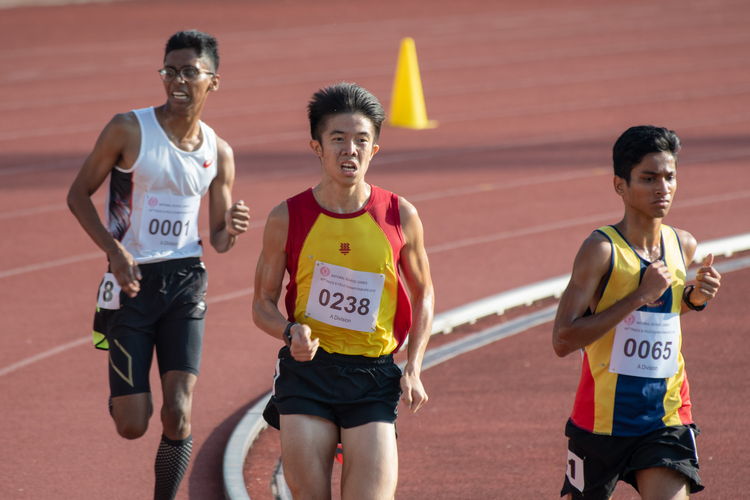 Ethan clocked a timing of 16 minutes and 23.44 seconds in the race, shattering his previous personal best by a whopping 23 seconds, which he attained in 2018.

The 18-year-old also revealed that both he and his teammate, bronze medallist Joshua Rajendran, had both broken their personal bests in the race.

“My teammate Joshua and I had trained really hard in the past year — we weren’t expecting to win or anything, but we were definitely sure that both of us would do well. In all honesty, we just wanted to break our personal bests,” said Ethan after the race.

High expectations were placed on ASRJC’s Ruben, having qualified the fastest from the heats in a time of 18:11.22, five seconds ahead of Ethan’s qualifying time of 18:16.80.

At the sound of the gun, Ethan and Joshua both took the initial lead, pacing each other for the first five rounds. It hardly seemed like a battle for dominance, as they were matching each other’s pace perfectly.

Although it seemed like the HCI pair had attained an insurmountable lead over the rest of the runners, Ruben was not going to give up that easily. The ASRJC runner started picking up the pace and catching up.

By the eighth round, it was a close fight between the three, each of them overtaking each other at intervals along the track.

In the 10th round, Ruben soon overtook the HCI runners to gain a 20-metre lead over Ethan, while a tired Joshua started to slow down and fall back.

Despite falling behind Ruben, Ethan still had enough in the tank, overtaking him in the last lap to finish in a time of 16:23.44.

Despite his best efforts, Ruben had to settle for second, finishing six seconds after Ethan. Joshua, fatigued from the intense heat, finished in third place despite his initial lead, with a time of 16:35.30.

“It was really hot today and I had to try my best to deal with the heat. All of us ran our best and our hardest,” said Ethan.

When asked about his race strategy, he replied: “I told myself to do my best and to stay calm and assess the situation, and to go all out around the last 400 metres or so.”

Despite coming in second, Ruben was all smiles after the race, having shaved almost two minutes off his heats timing.

“I think everyone did well today. In all honesty, today was the first race that I had the most fun in,” shared Ruben.

“I’m quite satisfied because I went all out today. I would say I really pushed myself today and got a timing that I did not expect myself to achieve,” he added.

Ethan will now prepare to compete next in the A Division boys’ 1500m final, while Ruben looks forward to the 3000m Steeplechase. Both boys will meet again in the 4.8km race at the National Schools Cross Country Championships in April.