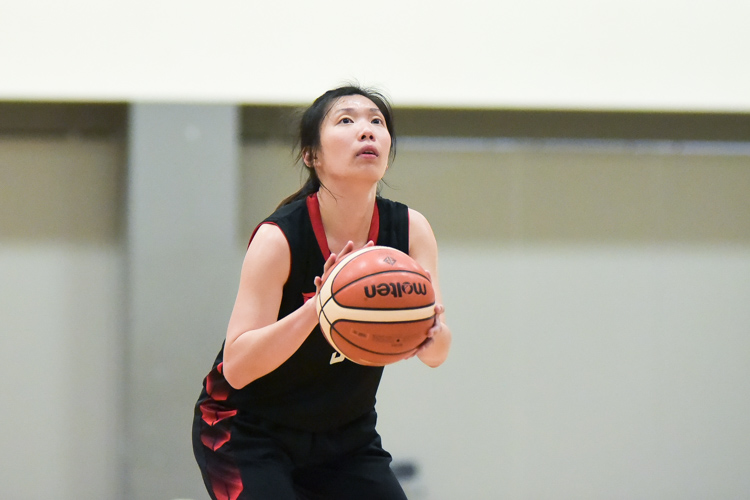 NTU got off to a strong start with two three-point shots from Woon Wei Jing (NTU #12) in the opening minutes of the game. Playing aggressively, NTU ended the first quarter as the clear favorites with the scoreline at 21-7, in NTU’s favour.

Nonetheless, NTU did not remain complacent, recognising that the SIT players were skilled opponents.

“While we’ve played SIT before during the Singapore University Games (SUniG), they have had a new coach and new strategies. Instead of man-to-man, SIT now plays zonal defense, something we are not used to as other teams usually play man-to-man. We had to take that into account and adjust our training accordingly,” explained NTU Captain Amanda Lim (#9).

“They are really good players so we had to come up with a defense strategy to stop their attacks. For instance, Sara, as the guard, is very explosive so we had to keep her from driving towards the basket,” elaborated Amanda (NTU #9).

Indeed, SIT fought on despite being regularly down by 10 to 20 points, with Sara (SIT #4) and Cheryl Ong (SIT #10) scoring a few three-point shots to boost the team’s morale.

“I feel really happy about the game. Even though we didn’t win, our team spirit and chemistry were really strong. We may not have a single star player but we do shine together as a team. Even just making into the final was beyond our expectations this season,” said SIT’s Captain, Li Ping (#15).

Alas, NTU’s lead from the start of the game was simply too big. At halftime, the score stood at 38-17. This was extended to 51-25 in the third quarter. While the girls in black were only able to score 10 points in the fourth quarter — their least number of points in any quarter of the game — their lead was more than enough to give them a comfortable victory of 61-34.

For the champions, this IVP victory also served as redemption for last year’s loss to the Singapore Institute of Management (SIM).

“Having lost the title last year, all of us knew it was important to win it back. Overall, I think my team did a good job. Both the seniors and juniors stepped up,” Amanda (NTU #9) concluded.

Despite their loss, this year’s result was still a breakthrough for SIT as it was not only their first IVP Basketball final but also the first time the school medalled in any team sport at IVP.

“Our new coach, Poh Leng, has helped a lot in terms of getting the girls to gel together, develop teamwork and bring out the strengths of each individual player. Individually, our players are not as strong as those from other teams, but collectively we play pretty well,” said SIT’s teacher-in-charge, Ms Li Ling.

In the third and fourth playoff, a much closer fight saw Singapore Polytechnic (SP) emerge victorious against Temasek Polytechnic (TP). Aided by their top player, Jayne Chan (#3) — who scored almost half of the team’s total points — SP pulled ahead of TP in the second quarter and maintained their lead to complete a 60-50 victory.

Said SP’s captain, Tiana Ng (SP #35): “This is our first IVP basketball medal, so we’re very happy with the result. This was our goal from the beginning and we were quite nervous coming into the game. But once we were on the court we just focused what’s in front of us, communicated and applied what we learned in training. I’m glad that we managed to win the game.”