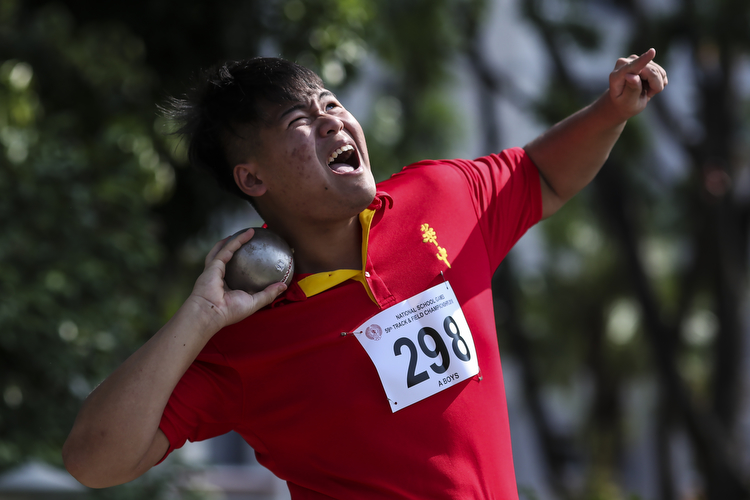 Choa Chu Kang Stadium, Tuesday, April 3, 2018 — An exclamation of “OHHH…MY GOD” by Hwa Chong Institution’s Evan Koh during his final attempt, followed by an eruption of joyous laughter marked the conclusion of the A Division boys’ shot put final at the National Schools Track and Field Championships.

While Koh’s final attempt was 14.63 metres, his second attempt of 15.32 metres had secured him his gold medal, which is his first metal since Secondary 4. Koh’s winning throw is also a new personal best.

“For me, I have limited amount of energy and explosiveness, so normally, I start to get tired with more attempts and it’s hard for me to win if I don’t do it in my first three throws,” said Koh. “That explains my final throw, when I had a lot of things on my mind and my release was off.”

Koh’s win was a marked improvement from the previous edition, where he finished fifth.

“It was quite a humiliating defeat for me,” said Koh, who had been training thrice weekly since mid-December. “I only had myself to blame because I was lazy and I skipped a lot of training, so I had to catch up this year.”

The second-year student credited his victory to his peers and a lot of training.

“Before this competition, I was very stressed, and I wouldn’t have been able to do it without my friends and team-mates, so having a good support group is really one of the methods to cope with such situations.”

Koh added: “Training regularly and knowing what you want is also very important.

“Those who are listening, train hard, because it is possible.”

The silver medal went to Jonathan Low of Raffles Institution, who threw a distance of 14.86m, while Koh’s team-mate, Yeo Jun Kai, rounded up the podium with a throw distance of 14.53m.