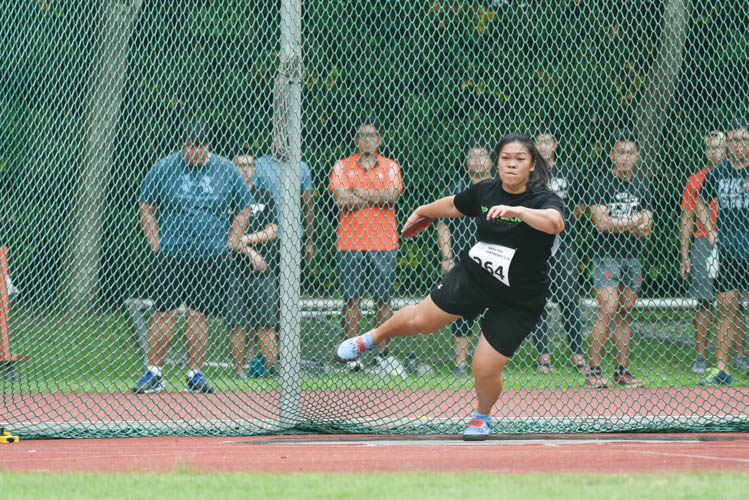 Bishan Stadium, Saturday, January 20, 2018 — Thrower Melissa Yee struck gold again on the last day of the Institute-Varsity-Polytechnic (IVP) track and field competition with a second gold medal and new personal best in discus throw, while National University of Singapore (NUS) had a clean sweep of the overall titles for the fourth year running.

Melissa, a Republic Polytechnic student, won with a throw distance of 40.04m. This is three metres better than her old record and is her second PB this season. The first was for shot put on January 13.

It was an unexpected bonus for the Republic Polytechnic student, who credited her stellar performance to a new coach and teammates.

“Now that I have training partners, I feel more motivated to do the workouts and all, because I look forward to the fun and laughter that we have in training. It’s not so serious all the time,” said Melissa, who started training under throws coach Ron Koh late last November.

Melissa also set a new personal record of 12.48m for shot put on the first day of IVP, despite competing in Adidas Stan Smith sneakers instead of her usual throwing shoes.

“I actually had a dream about forgetting them again last night, so I remembered to bring them today,” said Melissa with a laugh, adding that she forgot her javelin spikes instead before a friend brought it to her later.

Another big winner of the day was NUS athlete Brian See, who wrote himself into the record books with an IVP record-breaking throw of 13.98m for the men’s shot put event.

He is part of a new crop of talent from NUS that helped the school sweep up most of the top spots. NUS emerged the champion for the men’s, women’s and overall categories.

The new championship record came as a surprise for Brian, who lost out on the discus throw title to Nanyang Technological University’s (NTU) Julian Rapet on the first day of IVP.

“I wasn’t expecting much going into the competition, I knew the record was within reach but I had no expectations as I trained more for discus,” said the gold medallist.

“Breaking the record at my first IVP is really special and I hope I can improve this mark with every subsequent IVP,” he added.

The usual crowd favourites, however, also put up a good fight for their schools.

Singapore Institute of Management’s Nabin Parajuli smashed the 3000m steeplechase championship record with a timing of 9:37.65s, earning him his first gold of the season. The mid-distance runner had previously come in second for the men’s 10000m and 5000m.

Over at the sand pit, jumper Ang Wei Lu of Singapore Polytechnic defended her title in long jump with a winning effort and a new PB of 5.39m. This makes her the returning champion for both long and triple jump, having won the latter on the first day of IVP.

It was a good day for jumper Hairul Syamil Bin Mardan of Nanyang Polytechnic (NYP) too after he scored the gold for high jump with a jump height of 2.02m, a new PB for him. He later attempted to break his coach Ronnie Cai’s IVP record of 2.04m, but a lightning alert foiled his plans.

In the overall title points race, NUS was far ahead of the crowd with a total score of 392. NTU edged out NYP to come in second with 204 points to NYP’s 193.

In the women’s overall category, NUS won with 172 points. NYP and SMU were second and third with 103 and 91 points respectively.