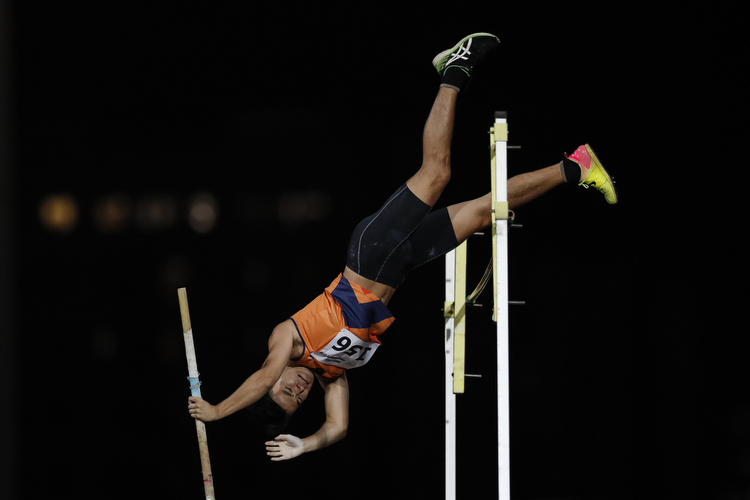 The National University of Singapore undergraduate, who is also the national under-20 record holder for the event, was determined to apply what he learnt from his first IVP competition in 2017.

“Last year’s experience really taught me what to focus on every training. I realised that last year, I really didn’t penetrate well during competitions. So today, I made sure that I penetrate well on all my jumps, and that was most important,” said the 22-year-old medicine student, who has a personal best of 4.95m.

Sheng Yao already had the gold in the bag after clearing 4.60m, but chose to try his hand at breaking the IVP record.

He took a chance on using a heavier pole which he borrowed from silver medallist Dewey Ng, for his final few attempts.

While he struggled a little initially to get used to the new pole, the switch paid off as the stronger recoil from the new pole helped him breeze past the 4.71m mark on his third and final attempt. The crowd lent a hand by clapping during his run-up to help him keep time.

“My target was really to qualify for the ASEAN University Games. Breaking the record was a bonus, especially since it’s been around for so long,” said Sheng Yao, with a grin.

His record breaking efforts were witnessed by former record holder, Edwin Chong, who was also in the audience. Edwin, who set the meet record of 4.70m at the 2013 championships, exchanged handshakes and smiles with Sheng Yao after the latter’s win.

Dewey Ng of Nanyang Technological University claimed second with a vault height of 4.20m, and third place was snagged by Irvin Goh of Ngee Ann Polytechnic who cleared 3.00m.

Another first-time IVP gold medallist was national mid-distance runner Zachary Ryan Devaraj of NUS, who won the men’s 1500m event with a timing of 4 minutes 15.73 seconds. Schoolmate Chew Xiu Zheng took home the silver with a PB of 4:18:13, and Burton He of SIM was third at 4:21:29.

The rest of the day’s events were also dominated by NUS.

The final day of the IVP track and field championships will be held this Saturday, January 20, at Bishan Stadium. NUS are in prime position to claim a fourth successive trio of titles in the men’s, women’s and overall categories.

They have 117 points in the men’s title race, while NTU (74) and Nanyang Polytechnic (31) languish in second and third place.

In the women’s category, NUS have 84 points to Singapore Management University’s 47 and NYP’s 43.

NUS lead the overall title points race with 201. NTU are currently in second with 99 while NYP have 74 points to lie in third spot.