A Div 4x400m Relay: Sports School girls claw back from 6th to 1st to deny HCI and RI in thriller 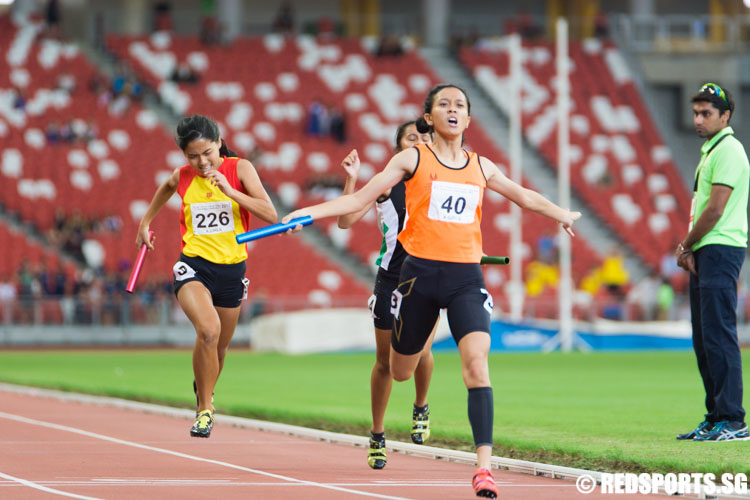 Ismi Zakiah crossing the finish line for Singapore Sports School, earning them the gold medal with a timing of 4:12.23. (Photo 1 © Jerald Ang/Red Sports)

National Stadium, Friday, April 28, 2017 — 0.9 seconds: that was all that separated the top three in the A Division girls’ 4 by 400 metres relay final at the 58th National Schools Track and Field Championships.

Earlier in the afternoon, Akhira, Celeste and Ismi had also teamed up with Tia Rozario to clinch a silver for SSP in the 4x100m relay.

The results meant that SSP have successfully garnered their first ever A Division relay medals, on their first time competing in the A girls’ relays.

Impressively, SSP’s victorious 4x400m quartet is made up of athletes spanning various disciplines – picked from a limited pool of only five girls in the school’s A Division team.

For Akhira, whose participation in the relays was a first, the medals are definitely to savour.

The long jumper, who made the switch from distance running last year, said, “I mean we have strong runners, but for me to be a part of this team and to be winning the medals – it’s really the most memorable event in my whole six years in track and field. It feels really good.”

Celeste, winner in the 400m and 400m hurdles – with a new championship record in the latter event – added that the gold and silver in the relays had exceeded their expectations.

“Honestly, in the beginning we just wanted to go in and try it out,” she said. “We are a very new team, so honestly coming into this Nationals, we wanted to run the relays to just have fun, and if we get a medal then it would be a bonus.”

By the end of the first leg, it looked as though SSP were not even in contention for the podium. RI’s and HCI’s first runners, Corrie Teo and Zhang Jingxuan respectively, had given their teams a significant advantage over the rest.

On the second leg, it was status quo: RI’s Clenyce Tan and HCI’s Arissa Rashid – who had earlier won the 800m – were neck-and-neck, way ahead of the chasing pack. Addeen Idzni, who had also run the 800m, inched SSP forward from sixth to fifth position.

Then on the third leg, the two-way race became a three-way one. Celeste, facing a 30-metre deficit, stormed through in a sub-60s split, catapulting SSP from fifth position to draw level with the front pair of RI’s Tanisha Moghe and HCI’s Tan Jing Wei.

What followed after, was madness: barely anything separated RI’s Amirah Aljunied, HCI’s Audrey Sarah Tan and SSP’s Ismi Zakiah on the final leg. Amirah held the precarious lead for RI, successfully fending off her counterparts for the first 350 metres.

Alas, the finish line did not come soon enough. Ismi surged past Amirah for victory with 40m to go, while Audrey also felt inspired late on, dipping marginally ahead for the silver.

“It was very intense,” said Ismi, who had won 200m gold and 100m silver. “At the start (of the last leg) I kept telling myself, ‘It’s okay, keep calm, just move and follow (Amirah).’ I thought I should move slightly faster, so I picked up my speed. Towards the last curve, it was just an intense fight between me and her, and we kept pushing each other all the way until the last 100 metres.”

“I was slightly tired by then. I was thinking, ‘Oh no, I can’t keep up, I’m too tired,’ but in the last few metres I kept telling myself, ‘I need this, I need to make my team proud,’ so I pushed a bit more.”

Audrey, too, had her initial doubts.

“I was very nervous at first,” said the HCI anchor runner, who had won silver in the individual 400m. “But then I told myself not to give up and to fight for the school.”

“I think everyone fought very hard. It was a good run – without (Ismi and Amirah), I wouldn’t have been able to push.”

As for RI, Clenyce maintained that they had no regrets on not finishing higher on the podium.

“I think we fought as hard as we could,” the 400m hurdles silver medallist said. “That’s the best performance we could have delivered in that moment – everyone definitely ran their hardest.”

“I’m very happy that our Hwa Chong team won all four championship titles,” said Audrey. “It’s been awhile and that was our goal since last year. It was really a tough fight, and everyone put in a lot of hard work and support to achieve that.”

Meanwhile, SSP finished fourth in the overall A girls’ team standings – an extremely remarkable feat achieved with only five athletes.

Between the five girls, SSP garnered six golds, two silvers, a fifth and seventh placing – with two championship records in the long jump (Tia) and 400m hurdles (Celeste) to boot.

(You can watch a video of the race here.)