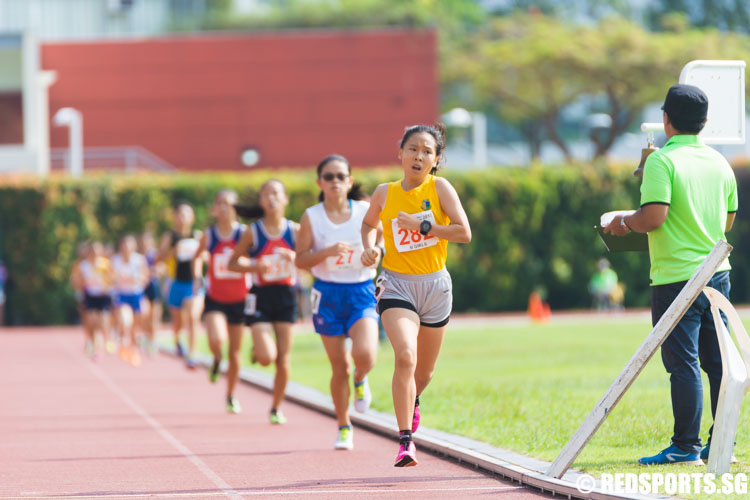 Bishan Stadium, Monday, 24 April, 2017 — After a string of silver and bronze medals, Vera Wah finally hit gold for Cedar Girls’ Secondary School in the B girls 1500 metres race at the 58th National Schools Track and Field Championships, finally triumphing over the same runners who have repeatedly finished before her.

In crossing the line first in a time of 5 minutes 11.85 seconds, Vera also denied Elizabeth Liau of CHIJ St Nicholas Girls’ School a hat-trick of distance titles. Elizabeth, the national schools cross country champion who had also earlier won the 3000m, finished third in the 1500m in a time of 5:20.75. Nan Hua High School’s Clarice Lau claimed the silver with 5:16.67.

When she took the lead from Elizabeth and several other old foes such as Clarice and her Nan Hua teammate Phobe Tay late in the race, Vera found herself in unfamiliar territory. These were the same contenders from the National Schools Cross Country Championships last month where Clarice led her school to its first B girls team title.

Vera had finished third at cross-country and second in the 3000m last week, but she was also slowly moving up the ranks amid the glut of competitive races in such a short period of time.

“I wasn’t quite expecting to win today,” said Vera. “Believing in myself is important, I learned today I’m actually stronger and capable of more than I think I can.”