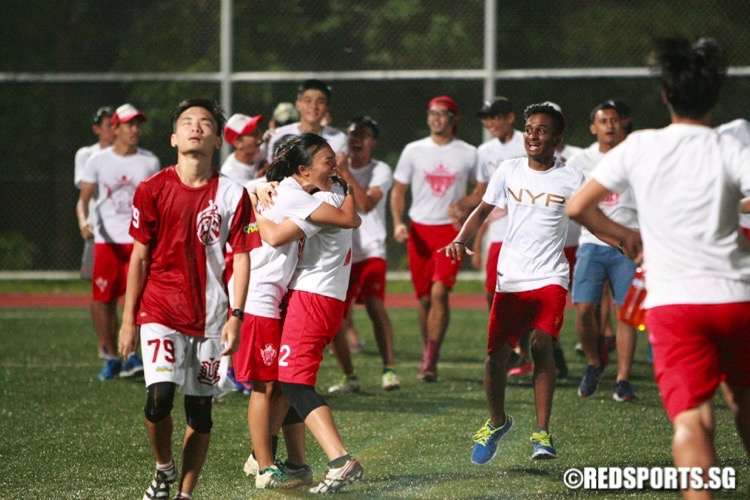 The intense, absorbing match on a rain-soaked artificial pitch was played under floodlights after a lightning delay. NYP had the lead throughout, but they were never out of sight as TP pushed them all the way in a game that kept spectators rapt until the end.

NYP vice-captain Conrad Wong (#99) said, “What stood out for me in the game against TP was the sheer intensity of both our sidelines, all the support from our juniors, especially our alumni. What gave me strength to keep running and pushing was the encouragement from everybody. We were tired, but people on the sidelines told me, ‘Just keep running!'”

NYP captain Krish (#5) said, “Both schools gave their all for this. They trained so hard for the past six months. Coming into this game, we knew that every disc, every catch, every throw, was going to count. Both NYP and TP gave all out. I respect the way they played.”

NYP vice-captain Conrad added, “The first few games, we didn’t start very well. Coming into POL-ITE, we had a lot of new players, they didn’t really know what to expect. Our more memorable games were against RP and TP. These two games pushed us to our physical and mental limits.”

TP captain Raphael Soh (#79), “Even though we are down, our alumni, and the people who came down to support us and cheer us on, brought our morale up. One positive from this game is the spirit of this game because frisbee is a self-officiated sport. We call the fouls ourselves. The calls were resolved fairly and cleanly.”

There were some positives for TP from the tournament.

TP coach Derek Koh said, “Both teams played really well. Both teams gave 100 percent. Unfortunately, there can only be one winner, and we fall short once again after three years of getting silver. I congratulate NYP for training so hard and coming out on top again. Next year, we will train harder and try to beat them.”

“In my team, out of 24 players, nine are seniors. One positive takeaway is that they push my Year 1s and 2s. They improved quite a lot. I have seen the progress they have made in the last three months. That’s the best takeaway from this tournament,” added coach Koh.

RP captain Brian Farith Goh (#3) said, “The best game that we played was (the 3-9 loss) against NYP. It was one of the most intense games. For the first point, it took us 15 minutes. It was a very intense, a very close game. We put our hearts out for this game and we really enjoyed it. NYP were the toughest opponents. They are one of the best in polytechnic ultimate. We chased down all the discs but they have better physical and mental strength. I won’t be surprised if they finished as champions.”

NP captain Bertrand Ang (#16) said, “Our match against RP was the best game for us because we really tried to push them. Our toughest opponent so far is TP. TP this year is quite strong. They got good flows, good cuts, good handlers. They can identify what defence we are trying to do and they will make use of it. During our match against TP, they didn’t really send out all their best players, but we were already giving our 100 percent.”

SP captain Joel Jayram Bernard (#7) said, “The best game was against TP. Although we lost by one point, it was a very tough fight, both teams gave their 100 percent. That’s what matters. It’s not about the results, whether we win or lose, but how much you want to put into the game. I think TP and NYP are on par with each other, and they both gave us a very tough fight.”

For Joel, TP captain Raphael Soh (#79) was a standout player in the championship.

“He is a big threat. He is called Raphael, or Ralf, for short. He is a very tough opponent to play. He has years of experience. He can do many things. His jump height is very high and he can run very fast, faster than a lot of the players here. When he is marking me, I will be more careful. You are afraid he will come out of nowhere,” said Joel.

ITE finished the championship without any wins, but ITE captain Bradon Ng (#69) was proud of his team’s fighting spirit, especially against eventual champions NYP.

“The toughest team was NYP, one of the best. The whole team was giving our 100 percent. We fought for every single disc and never gave up even though we got a turnover,” said Bradon, who could not play in the championship because he just recovered from a broken ankle.

“Over the years, ITE has been losing to NYP like 0-13, not scoring a single point. But this year we showed what we have, because we came in with a different team, and we came in stronger than before. In the following years, we will have more to show.

The top three teams – NYP, TP, and RP – qualified for the Institute-Varsity-Polytechnic (IVP) Ultimate Championship where they will face potentially tougher opponents.

Said TP captain Raphael (#79), “In IVP, we are going up against universities with more experience in this sport than us, and they are also older than us. But that does not mean we will lose to them. I believe if we put in the effort and train hard enough, we poly teams will be able to beat them.”

“We want to put on a show to the other universities that the polys are there to make a stand,” said NYP captain Krish (#5).