SYOF Badminton: Sports School, Team Nameless emerge from 43 teams to win U-17 and U-15 categories 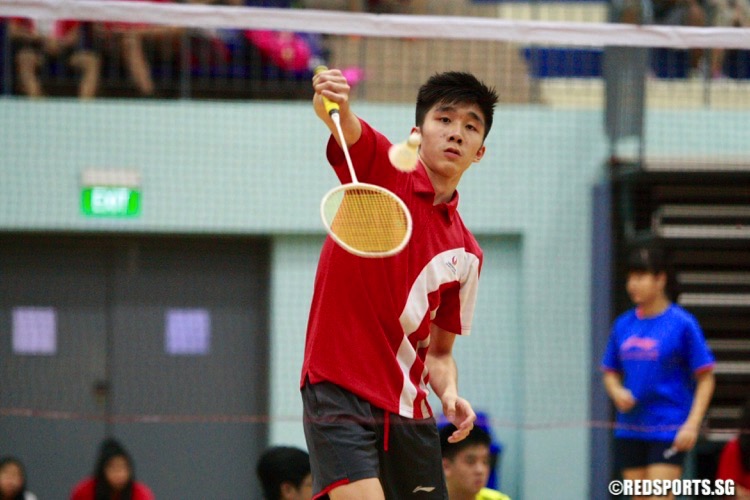 His teammates Ivan Go and Lee Zhi Yuan then teamed up in the 1st Doubles and saw off Lee Zong Han and Adriel Fu 11-1, 11-5.

Most of the Sports School players took part in the B Division earlier this year and finished as North Zone champions with a 4-1 win over Bowen. The team then went on to win the National Championship with a 5-0 victory against Anglo-Chinese School (Independent).

For the Sports School players, training intensity has picked up as they prepare for tournaments.

Said Benjamin, “Darrion is heading for Asian Juniors while the other three are going to Thailand to take part in a tournament during the end of year school holidays. We train twice a day, and once on Saturday. We hit the gym twice a week on Tuesday and Friday. The intensity is high during this period.”

In the u-15 final, Team Nameless saw off the challenge of Singapore Sports School to win 2-1.

Team Nameless, made up of Ryan Foo, Hakiim, Guo Jia Jun, Ean Eu, and Hoe Yew Wis, showed the win in the final was no fluke after having beaten the same opponents in the group stage. They also finished the tournament unbeaten over six match ups.

However, Sports School evened up the final when Torance Jng and Donovan Wee also made a come-from-behind win, beating Ean Eu and Hoe Yew Wis 6-11, 11-6, 8-11.

However, Yew Wis shook off the loss and went back on court immediately for the 2nd Singles where he beat Wesley Koh 11-3, 11-8 to secure the win.

For Wesley, a Sec 2 student-athlete, it was a good experience. “Yesterday (in the first round) was intense because we played Nameless (and lost 1-2). They are the strongest team. All of them are Sec 3s. We are sec 1s, Sec 2s. We don’t normally play against sec 3s except in school training.”

Said Ean, 15, of Team Nameless, “We are a group of friends from different schools. Some of us have known each other since primary school. We met at competitions, so I got everyone together to play. This is the first time we have played together as a team. We are from Nan Hua High, Bowen Secondary, and Ang Mo Kio Secondary.”

The SYOF, into its sixth edition, is a fun multi-sport event for youths aged 18 and below to commemorate the anniversary of the inaugural Youth Olympic Games (YOG) held in Singapore in 2010.

Badminton is one of 11 sports making up the festival. The other sports are athletics, fencing, 3-on-3 basketball, football 7s, rugby 7s, sailing, shooting, table tennis, taekwondo and volleyball.