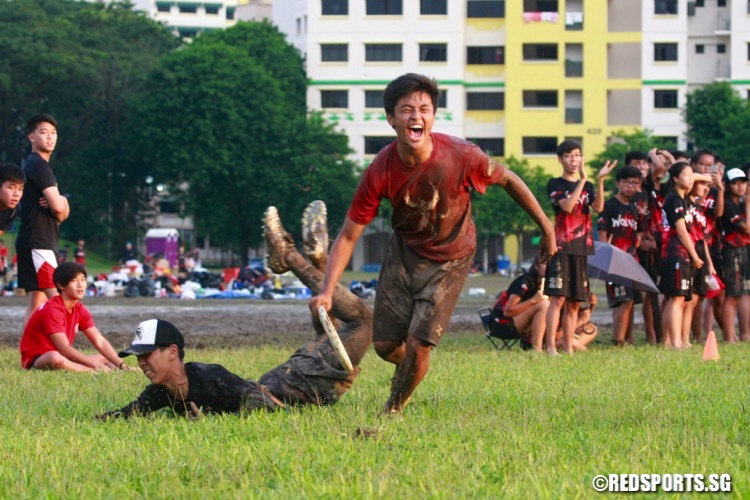 Tan Kai Rui of PJC reacts after scoring the winning point to help his team beat RI 13-9. “All these past two years, the effort I put in with the team, it’s worth it,” said a choked up Kai Rui after the game. (Photo 1 © Les Tan/Red Sports)

For PJC, victory this year marks a steady progression over the last three years. They had finished second to Serangoon Junior College (SRJC) in last year’s final, and in 2014, they finished third. Defending champions SRJC finished sixth this year. RI were champions in 2013 and 2014.

Paul Lam (PJC #12) said, “It was a bit tense at the start because we were not sure who was going to gain the upper hand. But afterwards, we started to become more confident as the score gap became bigger. I don’t know about the others, initially I was a bit skeptical (of qualifying for the final). I became more confident as the games progressed. I saw how we all grew, and became stronger. The toughest game (in the tournament) was the final.”

PJC were unbeaten throughout the championship. In Round 1, they outscored their opponents 42-1, with NUS High the only team able to take a point off them.

PJC continued their commanding performance in the knockout stage, seeing off teams from Hwa Chong Institution, Anglo-Chinese School (Independent) and St Andrew’s Junior College by comfortable margins to qualify for the final.

Said vice-captain Loo Jia Ein (PJC #5), “We have come a long way since the start. It was really worth it. Our seniors had high expectations of us and we trained really very hard. So hard work leads to success.”

RI were also unbeaten all the way to the final. They also faced the defending champions SRJC twice. They saw off SRJC 8-3 in the group stage and had to meet them again in the quarter-final, where they eked out a narrow 4-3 win.

RI then met ACS(I) in the semi-final, winning 6-3 to set up the final match up against PJC.

The final was tight in the opening exchanges. RI scored the first point of the game but PJC equalised soon after. The score was tied at 2-2 15 minutes into the game before PJC pulled away to establish a 4-2 lead through Ihsan (PJC #13).

Tan Jia Xin (RI #7) reduced the deficit to one point but Tan Kai Rui (PJC #2) restored the two-point cushion to make it 5-3.

RI again had a reply, this time through Eugene Lee (RI #22). With 30 minutes gone on the clock in a final with no time cap and where the first team to reach 13 points would win, PJC held a slender 5-4 lead.

PJC then took control of the game in the next 30 minutes as they went on a 6-1 scoring run to shift the momentum of the game dramatically. With a commanding 11-6 lead, PJC looked like they were strolling to the championship win.

Then came the RI fightback. With just two points to go to wrap up the win, PJC found themselves pegged back as RI went on a 4-1 scoring run of their own and the PJC supporters went silent.

Recalling RI’s comeback, Paul Lam (PJC #12) said, “When there was a turn, and I played offense, I couldn’t get the disc, and they kept scoring, I found it quite frustrating at that point. We were steamrolling half way, and they had a comeback, it was a bit shocking.”

When Lim Zi Yang (RI #1) scored his team’s ninth point to reduce the deficit to three points, hopes were raised among the watching RI supporters.

Then came the PJC play that put the game to rest. Captain Loh Hong Yi (PJC #13) took a risk and threw a long pass into the end zone where Tan Kai Rui (PJC #2) outran Jarret Ng (RI #3) to leap and grab the winner.

Said Hong Yi (PJC #13), “We tried to refocus even though the pressure was on and they were coming back. We kept telling ourselves, just do what we usually do, keep ourselves focused, and we will get the game. We were not surprised RI were coming back.”