National A Div Floorball (Girls): YJC come back from 0-2 down to upset MJC 3-2 and win title 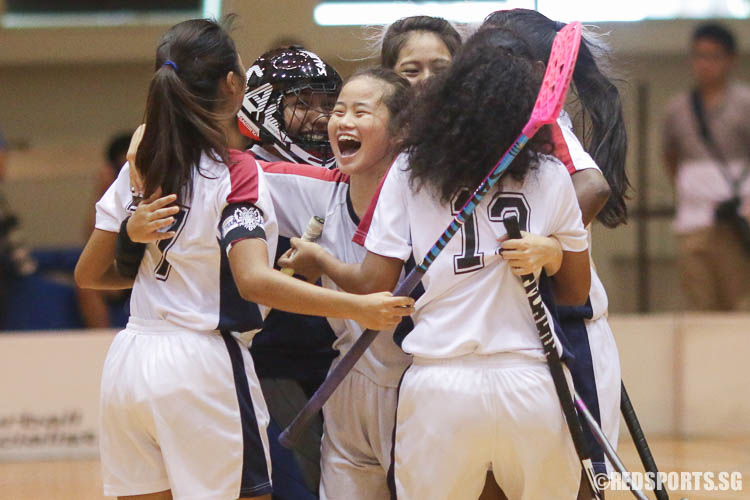 Both teams also met in the final in 2014, where YJC emerged victorious against MJC with an identical 3-2 scoreline.

With this win, YJC ended their season undefeated winning all their seven games. In Round 1, YJC topped their group with 20 goals scored, conceding only three. In the semi finals, YJC managed to overcome VJC 3-2 to secure a spot in the final.

It was a sight to behold as the hall was packed with a large crowd of MJC and YJC supporters holding banners and cheering throughout the game.

Ong Swee Ling (YJC #29) was the top scorer of the game with two goals, and also the main contributor to YJC’s victory.

In the first period, defending champions MJC made their presence felt as they outscored YJC 2-1.

Four minutes into the first period, Janessa Kong (MJC #14) slotted the ball in after an assist from teammate Emily Ong (MJC #88), giving MJC a slight 1-0 lead.

Shortly after, Emily (MJC #88) rode on the momentum of MJC’s gameplay and unleashed a long-range drag shot to widen MJC’s lead to 2-0.

Refusing to back down, YJC’s Alicia Chia (YJC #2) scored her team’s first goal from a free hit, reducing the deficit to 1-2. This gave the YJC players renewed hope.

Both teams were scoreless in the second period. There were numerous solid attempts made by both teams that were either off-target or blocked by the goalkeepers.

YJC managed to pull off a comeback by scoring two goals in the last period. Both goals were scored by YJC’s Ong Swee Ling (YJC #29), and were unleashed from mid-court outside the D area. Her shots were struck with such power and precision that it went through the MJC defence and into the net without any interference.

With the scoreline leveled, the final few minutes of the game was a testing one. With tired legs on both sides, the game was now fueled purely on desire. There was barely anything separating the teams as they traded blows, taking turns to launch attacks.

With only a minute left on the clock, the vital moment of the game came. Swee Ling (YJC #29) smashed in an effort from distance that proved to be the winning goal. The YJC players and fans erupted in celebration as they took the lead for the first time in the game.

There were numerous moments where MJC were close to equalising. In the last minute, MJC’s goalkeeper was substituted for an offensive player, in a desperate last-ditch attempt to score. However, YJC eventually held on for a hard-fought 3-2 victory.

YJC captain Nurul’ain Bte Hairuddin (YJC #77) commented after the game, “The game was full of emotions, but we broke through and held on to the lead. The last period was just amazing. I am very happy to be part of this team and to lead them. We went in really wanting it. We had only one goal in mind, and the perseverance displayed by the team today was amazing. At 2-1 down, we were telling each other that if you want it, just go get it.”

Thanking her coaches and teachers-in-charge, she said, “Thank you so much for guiding us and going the extra mile to help us in any way you can. And for teaching and grooming us into who we are today. It was really the trust you had in us that pushed us on.”

YJC vice captain Fasihah Bte Mohmad Azhar (YJC #1) added, “One thing I like about our team is that we kept pushing on. Even though we conceded first, we did not give up, did not let our morale go down and went in hard. To all supporters, thank you for coming down. Your support really means a lot to us, and without all of you this would not have happened. Thank you for believing in us.”