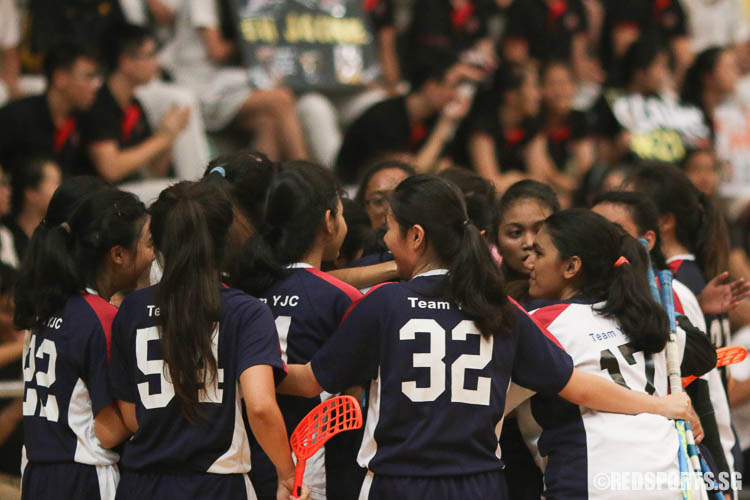 Yishun Sports Hall, Wednesday, May 25, 2016 — Yishun Junior College (YJC) qualified for the National A Division Girls Floorball Championship final for the third time in four years, after they hung on for a 3-2 victory over Victoria Junior College (VJC).

The last time the two sides met was in a third/fourth placing match in 2015. YJC won that match 5-0 to secure the bronze medal.

YJC were favourites coming into this game, after they breezed through the preliminary rounds undefeated. VJC, on the other hand, recorded one loss.

This semi-final match looked set to be a high-scoring one, with both teams averaging at least four goals per game in their last five matches.

The game began in a cagey manner, with both teams struggling to keep possession. Neither team made any significant efforts at goal for a good part of the first period.

YJC had the game’s opening chance as Cheng Xin Yi (YJC #9) made a quick pass on the turn to Shanice Tan (YJC #37) who saw her effort blocked by the VJC goalkeeper.

Shortly after, Shanice Tan (YJC #37) had another chance, receiving the ball on the left side of the D. She did not miss this time, as she unleashed a powerful shot from point blank range to put YJC 1-0 up.

VJC lacked ideas in the attacking half, as they were reduced to inaccurate long-range shots.

The later part of the first period saw YJC stamping their authority on the game with a flurry of attacks.

Their dominance paid dividends when YJC captain Nurul’ain Bte Hairuddin (YJC #77) broke past the VJC defence on the counter attack for a one-on-one chance. A composed shot into the back of the net doubled YJC’s lead.

The second period got under way with YJC picking up where they left off.

Nurul’ain (YJC #77) was again at the centre of all the action. Bharathi Buddhamurthy (YJC #13) rounded the back of the goal, passing the ball to Nurul’ain (YJC #77) who diverted it past the goalkeeper. At 3-0 up, YJC’s high-intensity play was proving too much for VJC.

YJC had the lion’s share of possession, which was a result of their disciplined recovery play, aggressively chasing the ball whenever VJC were in possession.

VJC were energetic on counter attacks, but their eagerness to get back into the game led to rushed ineffective gameplay.

Dione Goh (VJC #8) struck the ball from outside the D, but failed to test the YJC keeper as it went off target.

YJC took their foot off the gas towards the end of the second period as Audrey Tey’s (VJC #9) attempt was saved by YJC custodian Fasihah Bte Mohmad Azhar (YJC #1).

M Vaishnavi (YJC #4) suffered a two-minute penalty after being called for a foul, leaving VJC in a power play situation. However, VJC failed to exploit this as YJC did well to keep the ball away from VJC.

Cheng Xin Yi (YJC #9) combined speed and skill, making an impressive run down the left flank to cheers from the YJC support. Her eventual shot at goal was deflected away by a VJC defender.

The start of the final period saw VJC re-enter the court with renewed vigour, trying to force their way back into the game.

Chloe Lim (VJC #7) scored a goal against the run of play, after a scramble in front of goal. With this morale booster, the game tilted in VJC’s favour as they chased the game with determination.

Minutes later, VJC made another step in their comeback after Dione Goh (VJC #8) smashed the ball into the goal after being left unmarked in the centre of the D, making the final five minutes of the game a tense one for both sides.

Fatigue caught up with YJC as VJC went all out for the equalizer.

Audrey Tey (VJC #9) had a golden opportunity when she received the ball right in front of the goal. Her shot went straight to the keeper as a vital chance went begging.

During the final few seconds, VJC almost equalized as the ball missed the target by mere inches. YJC survived the late VJC onslaught, and booked their place in the final.

YJC captain and the game’s top scorer, Nurul’ain Bte Hairuddin (YJC #77) commented, “It was a very intense game and my girls pushed on, telling ourselves that we wanted it. We really want to get back the championship that our seniors won two years ago. I think the VJC girls also put up a good fight. I am very proud of the girls for the hard work and the effort. I believe we will put up an even better fight for the final.”

On the support they received from the YJC fans, she added, “We would like to thank the principal for letting them come. The support they gave really pushed us. We really appreciate it.”

YJC will face Meridian Junior College (MJC) in the final. The last time the two sides met in the final in 2014, YJC emerged 3-2 winners.

The final between YJC and MJC will take place at 1.45pm on Friday, May 27 at Delta Sports Hall.