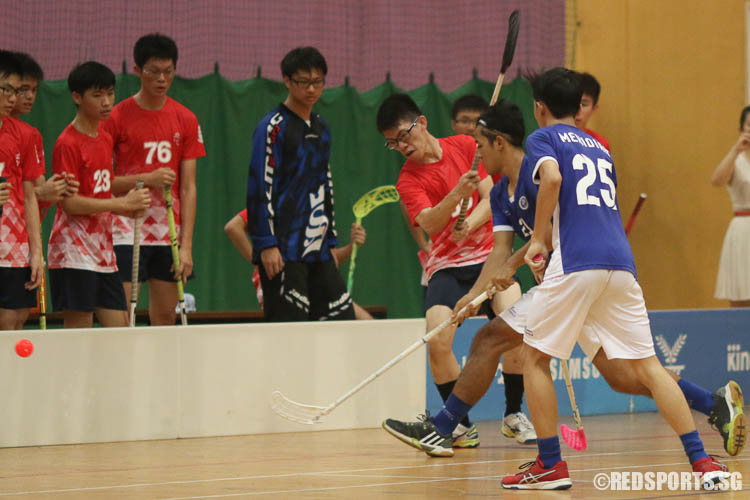 MJC scored 55 goals and conceded only six in their six games to top their group and secure a spot in the semi-finals. River Valley ended their season with no wins.

In a game where MJC dominated from start to end, River Valley had barely any good lookouts and it was a pity that some of their shots were just slightly off.

MJC showed control and teamwork throughout, with the ball in their possession 90 percent of the time.

Minutes later, Jeremy Chia (MJC #18) and Thaddeus (MJC #77) scored another goal each to widen the lead to 4-0. Jayvis Lim (MJC #25) then turned around and drove the ball into the goal to add another to end the first period 5-0 up.

Seconds into the second period, Muhammad Jazli B Yuslane (MJC #21) put a shot into the bottom left of the net, making it 6-0. Subsequently, Thaddeus (MJC #77) and Abdul Mateen Amir Mizra (MJC #4) bagged a goal each to make it 8-0. Jazli (MJC #21) then went on to score another goal during a River Valley high penalty to end the second period 9-0.

Jeremy Chia (MJC #18) scored two of the four goals in the last period while Abdul Mateen (MJC #4) and Janus Lim (MJC #22) added a goal each.

MJC will next face off with Anglo-Chinese Junior College (ACJC) in the semi-finals on May 25 at Yishun Sports Hall.