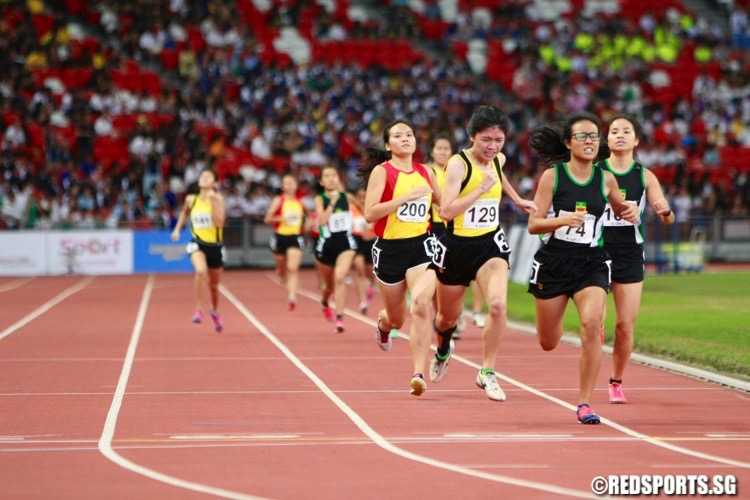 National Stadium, Friday, April 29, 2016 – A tactical, slow-paced race saw Alexandra Wee, 17, of Victoria Junior College (VJC) edging out the competition with a timing of 2 minutes 36.53 seconds to win the A Division Girls’ 800m final at the 57th National Schools Track and Field Championships.

The electronically-timed record for this event still stands at 2:18.93, set by Jurong Junior College alumna Rahmah Begum in 1999.

Kitty Teo of Serangoon Junior College (SRJC) took the early lead. She managed to maintain the lead until the end of the first lap when the pack caught up with her.

Natalie surged ahead at the start of the second lap to take the lead, followed closely by the chasing pack who were still running together. She managed to maintain her position at the helm until the final 200 metres, where she was overtaken by Alexandra.

The duo increased their speed towards the last 150 metres, trailed closely by Corrie, and Dilys Hor of Hwa Chong Institution. The quartet came into the final stretch neck and neck, but Alexandra managed to out-sprint the rest to win a few steps ahead of Corrie, leaving Natalie to settle for a close third.

Alexandra said, “The race was good, and the most memorable moment was at the end, after the finish line, when it hit me that I had come in first. I expected (running in the National Stadium) to be nerve-wracking, but honestly it felt the same as it did when I run in other stadiums. For me, the crowd disappears when I run, so it didn’t affect me as much.

“This race wasn’t a personal best, but it was a more tactical one, rather than how good each person was, because I think the people I ran against are really good runners. I know it’s cliche, but I really owe this win to my coaches, teammates, friends and parents. And most of all, I would like to thank God for always being by my side,” she added.