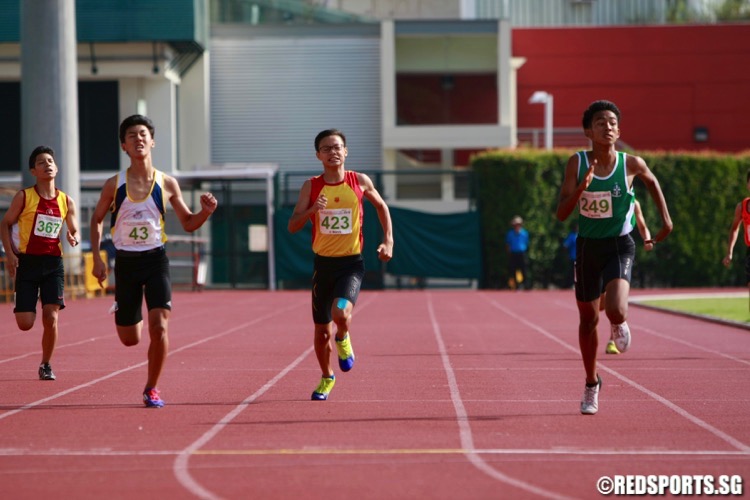 Samuel Lee of Catholic High School was second in 56.22s while Bryan Lam of Hwa Chong Institution was third in 56.40s. Kyes and Bryan were separated by just 0.59s.

Coming into the final 100 metres, the three athletes were inseparable. It was only in the final 20 metres that Kyes managed to edge forward slightly for the win.

The electronically-timed championship record for this event is 51.65s. It was set by the current B Division 400 metres champion, Joshua Lim of Anglo-Chinese School (Independent), two meets ago.

In last year’s meet, Kyes finished sixth, running the 400m in 58:30s. His experience certainly gave him an edge over his opponents this year, as he was the only athlete in the race to have run in a C Division 400m final for two consecutive years.

Despite winning the race, Kyes did not match his personal best of 55.77s which was clocked in the 42nd Singapore U18 & U20 Athletics Championships a month ago.

After the race, Kyes commented, “The race was excellent. I was quite upset with my first 300 metres. I was behind after the curve. I thought if I was on par, I could just sprint all out. But today I was in second place after the curve.

“But I remembered what my coach said. He said no matter what, don’t give up. Because at the end of the race, the guy who wins is the one who does not give up. I want to be remembered for being the guy that did not give up.”

On future goals, he added, “I want to represent Singapore in the Youth Olympic Games and SEA Games.”