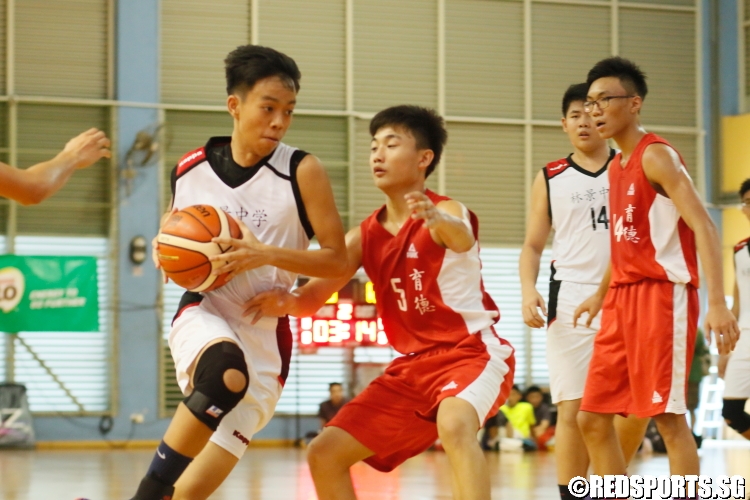 Woodgrove’s Owen Liow (#11) led his team to triumph with a game high of 19 points, ending the game as the only player to have hit double figures. Edgefield’s top contributor was Shi Yu (#12), who snatched eight points for his team.

With both teams eager to make their mark as the competition moved on to the second round, the game started off as a tight affair with the two sides matching up evenly.

Jack Lacsado (#7) of Woodgrove showed great leadership by giving directions to his team, and was also an effective playmaker. Towards the closing stages of the first quarter, Woodgrove began to break away from their opposition with a lead of 5 points.

The second quarter was a telling one, with Woodgrove asserting their dominance physically and extending their lead to 16 points.

Edgefield struggled to outmuscle their bigger-sized foes, as Woodgrove’s defence stood strong and compact. On the offense, Woodgrove landed a pair of 3-pointers from good distance. And when the shots from distance failed, the team’s robust nature aided them in winning the rebounds.

Despite being behind in terms of points, Edgefield spirits were not dampened as they toiled to narrow the difference.

As the game wore on, fatigue began to catch up with the players. This led to a slowing of gameplay. This was evident in a low-scoring third quarter.

Edgefield’s Adam (#7) sank an exquisite 3-pointer late in the final quarter, but it proved to be irrelevant as Woodgrove were too far ahead in points.

Woodgrove’s top scorer Owen Liow (#11) was proud of his team and commented, “We are playing great, following what our coach wants. We need to improve on our communication, and to box out more for rebounds. Our aim is to be in the top four this year.”