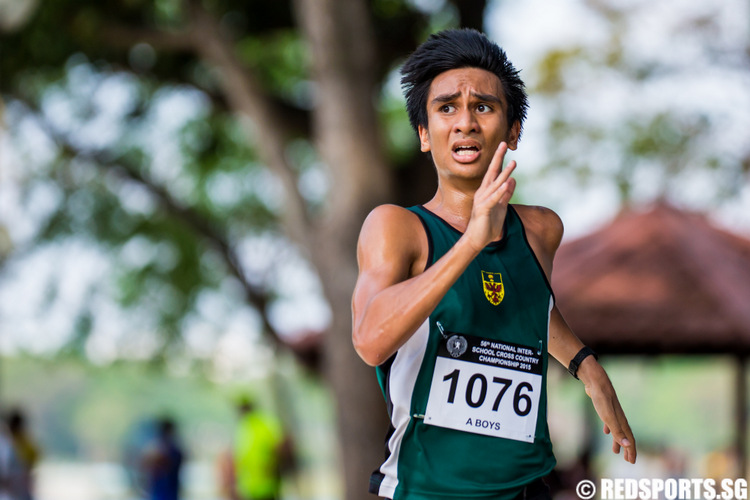 Shohib Marican (#1076) of Raffles Institution in action. He clocked the fastest timing of 16:05.1 among the boys’ A Division field to clinch his second straight division title. (Photo 1 © Lim Yong Teck/Red Sports)

Bedok Reservoir Park, Wednesday, March 25, 2015 — For the second time in a row, Raffles Institution’s (RI) Shohib Marican brought home the A Division individual gold medal at the 56th National Schools Cross Country Championships. He completed the 4.6km race in 16:05.1, about 10 seconds ahead of teammate Tan Chong Qi, who ended in second place.

The race started with a lead pack that consisted of Shohib, Chong Qi and Leroi, while Chester trailed behind with a gap of 80m. The front runners began to string out midway, seeing Shohib in the lead with Chong Qi close by. However, the standings for top two remained unchanged until the end of the race as Shohib and Chong Qi crossed the line in first and second place respectively.

Meanwhile, a battle for the bronze medal ensued between Chester and Leroi in the last 50m of the race. Unfortunately, Leroi was extinguishing and could not hold on. Hence RI’s Chester, who had gradually closed the gap, pipped Leroi to the bronze by just a hair at the finish line.

When asked what his race strategy was, Shohib said, “There was so specific plan but I knew I had to take the lead from the start and run my best for the rest of the race.”

The 18-year-old attributes his success to those around him. “It’s more of a team effort as all of us train together. Without the support from my teammates, coaches and parents, the team and I wouldn’t have won this championship,” he explained.

Teammate and silver medalist Chong Qi, also agreed that the sport is not an individual effort but rather a team one. Chong Qi claimed the B Division boys’ gold last year when he ran the 4.3km race in 14:26.7.

For third-place Chester, the medal came as a surprise.

“During the race, I wasn’t confident and I wasn’t sure if I could catch up given the big 80m gap. I was also afraid of people overtaking me. But I increased the pace halfway through the race and managed to catch Leroi in the end. It was unexpected as he didn’t give a fight when I overtook him,” he said.

On the other hand, the race was bittersweet for Leroi.

“I made a mistake and ran off course at the half-point mark. The new route differed from the EPN 64th SAA Cross Country Championships in February, so it was confusing,” he pointed out. Leroi finished third behind Shohib and Chong Qi then.

“The finish line was complicated too. I thought I finished when I saw a line above me, but the actual finish line was 10m away. Because I slowed down too early, Chester was able to beat me,” he continued.

Despite his unlucky finish, Leroi remained positive. “Although I missed the top three by a little, the fact that I gave my best is enough for me,” he said.

RI’s podium sweep and individual eigth — which amounted to 14 points — easily gave the team the A Boys divisional team title. RI have been champions for four years running, since 2012 when they stole the title from Hwa Chong Institution (HCI).

Second and third in the team standings were Victoria Junior College (VJC) and Anglo-Chinese School (Independent) with 27 and 60 points respectively.

For the upcoming National Schools Track and Field Championships, each of the three RI medalists will be taking part in a combination of two of the following events – the 1500m, 5000m and 3000m steeplechase.