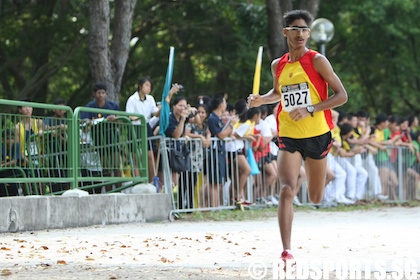 Bedok Reservoir, Tuesday, March 21, 2012 — Karthic Harish Ragupathy, the 2011 B Division cross-country champion, opened his A Division account in style, demolishing the rest of the field and completing the 4.3km course in 13 minutes 9.14 seconds at the 53rd National Schools Cross Country Championships.

Karthic, who is from Hwa Chong Institution (HCI), was more than 20 seconds clear of second-placed Jared Hui of Catholic Junior College (CJC). The former Saint Joseph’s Institution athlete also won the C Division title in 2009, and his latest triumph made him only the third schoolboy in history to have won all three divisions.

Bryan of RI was the first to react to the starting horn and had the best start, holding the lead for the first 100 metres or so. However, Karthic shifted gears soon after and went into the lead just before the runners funneled in from the grass section of the race onto the road. From then on, the result was never in doubt.

Karthic simply set a punishing pace and began to drift away from his challengers, with Bryan the only runner who tried to make a fight out it. Valiant as the Rafflesian’s efforts were, Karthic broke away by the top of the only hill on the course, and was already celebrating with half the race still to go, smiling and waving to his school supporters. With his only challenger left reeling, Karthic comfortably crossed the line in first place, looking as though he had just completed nothing more than a training run.

About 100m behind, the fast-finishing Jared Hui of CJC pipped an exhausted Bryan to second place, and Hwa Chong had a 2-point advantage over the Rafflesians. Sean Lim of Anglo-Chinese School (Independent) finished further back in fourth place.

In a duel of 800m and 1500m specialists, Justin of RI then outkicked Freeman Aw of HCI in the final 400m of the race to clinch fifth spot and reduce Hwa Chong’s advantage to a single point. Jonathan of RI then crossed the finish line in seventh place, with no other HCI runner in sight.

When the fourth RI runner, Everest Yeow, reached the finish before Hwa Chong had their third runner in, it was clear that RI had clinched the team championship.

With the cross country individual gold medal title in the bag, Karthic will now turn his attention to the upcoming National Schools Track and Field Championships, where he will contest the 5000m and 3000m steeplechase. He has already indicated his desire to break the 11-year-old steeplechase championship record of 9 minutes 57.25 seconds, set by Narayan Paudel of Victoria Junior College in 2001. If Karthic manages to produce the scintillating form that he has already displayed so many times this season, it would take a brave soul to bet against him.

Vote for your favourite 2012 cross-country runner