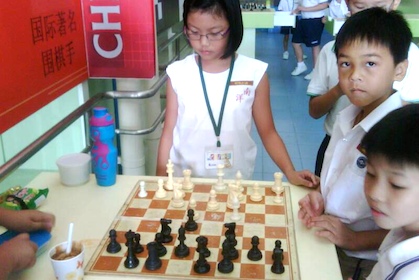 On a Monday morning of the new school term, Estelle Lee, a P4 pupil in Nanyang Primary School, bought her fish noodle, gulped it down quickly, washed her hands, and walked speedily towards the chess corner located nearby the school's canteen.

There, for the next ten minutes, Estelle immersed herself in complicated minutia evolving on the chess board while playing against one of the noisier boys around. Just before the bell rang, she checkmated the opponent's king. Following this sudden demise of his plastic monarch, the boy ran upstairs while Estelle shook her head smiling and arranged the pieces back in the drawer. She washed her hands one more time and then departed to her next class: Math.

Estelle became interested in chess a couple of years ago, but she seldom engaged in chess competitions outside school. Her mother told the teachers that Estelle reads a lot about the game at home and loves to play against anyone. The fact that Nanyang has a great chess culture and Estelle can easily find good players to spar against pleases her daughter, Mrs. Lee commented over the phone. 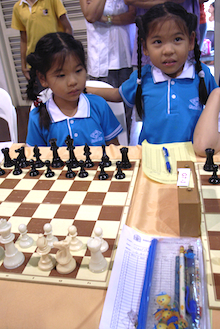 Sheryl-Lynn Tan and Shae-Lynn Tan - two of the most gifted NYPS lower primary chess girls of great
potential for the future. (Photo 2 courtesy of Olimpiu Urcan)

Bringing up "scholastic chess", one instantly thinks of USA or UK where chess-in-schools got a rapid advent in the last decade or so. But things are not much different in Singapore, even though the chess-in-schools movement (sanctioned by FIDE and SCF) in this country unfolds in almost complete silence.

Chess is taught as a CCA/enrichment course/Club activity in over 80 primary schools, a dozen secondary schools, colleges and universities. Nanyang Primary School is the top primary school when it comes to chess competitions. The NYPS Chess Club was founded in 2001 by a group of enthusiastic parents. In that year the membership rolls showed 20 active members. Between 2001 and 2008, the school club's membership climbed to over 200 active members. Yearly its members took part in national, regional and world level competitions. In these 7 years, the coffers of the club collected 100 medals earned at national and international level (46 Gold, 34 Silver, and 20 Bronze). A detailed history of the club's achievements can be read here.

A visitor taking a walk on school's premises located on King's Road may instantly realize the influence chess has upon Nanyang pupils. A giant chess set is located in the P3 courtyard. Then, near the canteen there's an impressive chess corner, an area of about 4x20m with 8 chess tables set against a backdrop panel displaying texts and images with history of chess and Xiangqi.

There, at every recess time, dozens of boys and girls play chess games, discuss topics related to chess or solve puzzles. Chess is taught as a CCA on Thursday and Friday when taxis drop seven professional coaches and chess masters at the school's gate to deliver lectures to more than 250 pupils in these two days. Chess is the biggest CCA in this top primary school known for its great variety of CCA offers.

To fully understand the chess culture that has been built in this school over the years, imagine this: a P5 girl drops by the chess corner during her recess time and engages in a chess game against a P6 boy who regularly played in the school team in the last couple of years. The girl wins easily and, with a smile, departs.

When asked if she would consider joining one of the Nanyang girls' teams she replied that she has no real interest in chess, her CCA is table-tennis this year, and that she just considers it very fun at times. There is some truth in the in-the-making Singapore urban legend: everybody knows how to play chess in Nanyang Primary, even the security guards. 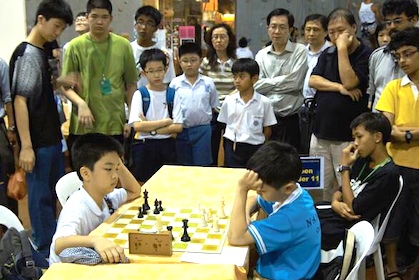 NYPS Chess Club is managed by teachers-in-charge and it hires professional coaches to conduct the weekly chess training. Their strategies worked out pretty smoothly as the Nanyang's domination in chess competitions island-wide has been a constant trend in the last eight years.

In 2009, an extraordinary generation of Nanyang pupils established an even firmer domination over hundreds of other schools in the national chess competitions organized by SCF. During the 61st National Schools Individual Chess Championships (17-19 March 2009), Nanyang sent the largest number of players (107). NYPS won 6 top medals (1 Gold, 3 Silver and 2 Bronze), more than any of the other 145 primary schools taking part in this competition.

During the Public Service Schools Invitational Chess Tournament (28-29 March 2009), NYPS sent no less than six teams to compete. The school won 3 Gold medals in Open U12, Open U10 and Girls U12 categories leaving behind, once again, the strong competitors from Northland Primary School and Anglo-Chinese schools.

At the SCF May Day Rating Tournament, NYPS' Nathan Mar, a Primary 2 pupil, finished top-10 in overall standings and also secured the Gold medal in Open U8 category; an amazing performance for such a young pupil. 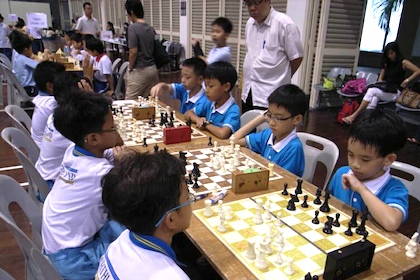 One of the Nanyang boys teams during the Public Service Schools Invitational Chess Tournament 2009. (Photo 4 courtesy of Olimpiu Urcan) 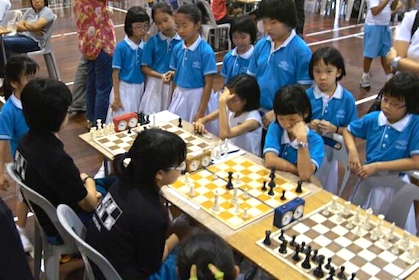 In early August 2009, at the National Rapid Challengers Chess Tournament, NYPS pupils won 2 Gold trophies (Open U8 and Girls U12) and 1 Bronze (Open U12) in addition to many other top-10 trophies. A week later, three NYPS teams took part in the National Inter-Clubs Chess Championships (Division I and Division II). In Division I, the NYPS Boys team finished 4th, behind secondary school teams. In Division II, the two NYPS teams took home the Gold and Silver trophies.

At the end of August, during the 50th National Inter-Schools Chess Championships, Nanyang sent 15 teams to compete, again the biggest number of teams sent by one school in a field of over 150 competing schools. NYPS pupils returned home with a resounding success: 4 Gold trophies (Boys Open, Girls Open, Boys U11, Boys U9) and 1 Silver trophy (Boys U9). Nanyang Primary was also awarded the "Best Primary School" Challenge Cup, the very first edition of a trophy sponsored by SCF. 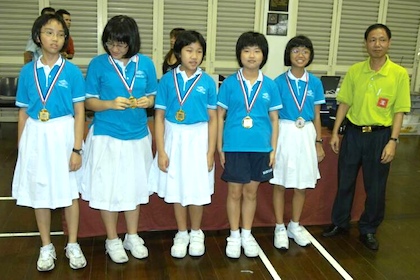 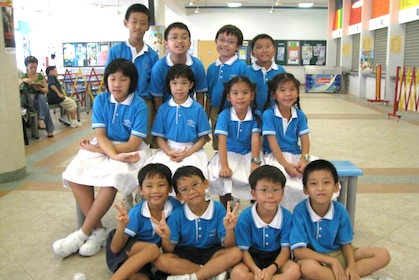 During the Childrens' Day Chess Challenge 2009 (held at the end of September 2009), NYPS won 5 out of the top-10 places in a field of 241 competitors. About a month later, Derek Lim, the school's highest rated player, was selected to represent Team Singapore during the ASEAN Primary Schools Sports Olympiad held in Indonesia between 3 and 9 November 2009. The Singapore team came home with a Bronze medal.

Approximately 50 of NYPS Chess Club's members qualified to be part of the National Junior Squad, a special elite group for chess juniors around the country serving as the pool for future talent for SCF training schemes. Michelle Ho and Derek Lim, the leading NYPS chess players, are also members of the Silver & Gold FIDE Rated National Squads.

Other primary schools attempt to mold this success. But what's the secret formula behind Nanyang's imposing advent with the game of Kings? It eludes even experienced coaches or teachers who would like to see this intellectual board-game taking similar heights in their own schools. 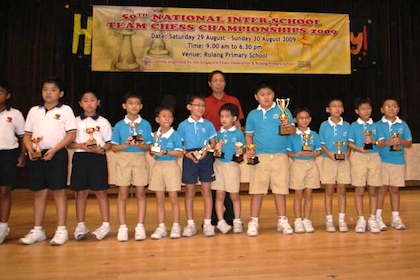 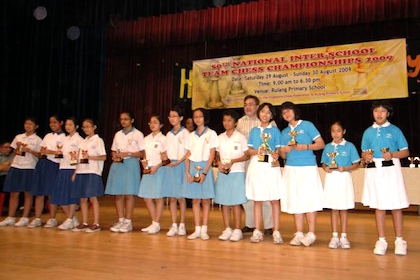 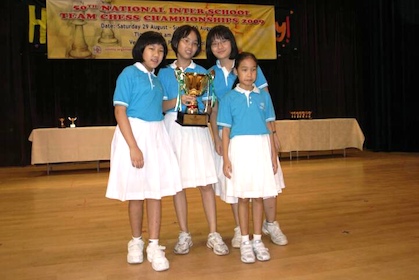 Besides CCA sessions, some basic chess is also taught within the curriculum time and chess sessions are organized as post-exam activities for P1-P6 pupils. Mr. Amos Lum (CCA Head) and Mrs. Cynthia Peck-Hoon Lim (CCA Assistant Head) worked closely with other teachers/mind-sports consultants to offer a greater variety of chess activities to the pupils.

The chess club's website, launched in February 2009, organizes regular online quiz competitions (related to key days in country's calendar: Total Defence Day, International Friendship Day, Racial Harmony Day, etc) which connect chess knowledge with Art, Math, and other subjects. The attempt is to relate as much as possible chess as a subject of study within the larger body of educational subjects taught in school. There is little surprise that the school's strongest players are GEP pupils.

Then, in March 2009, in order to inspire the pupils, Nanyang invited Woman FIDE Master Jeslin Tay (former Women's National Chess Champion and Singapore Olympic team player) to conduct a simultaneous exhibition against the pupils and lead a Q&A session. "Nanyang Primary School has definitely nurtured and produced many talented chess players in the past years," said Miss Tay. "The diversity of the club's training programs ranging from weekly sessions to overseas stints impresses me and I can confidently say that it is, by far, the only school which has done so."

A similar sÃ©ance was conducted by Woman FIDE Master Liu Yang, four-time Women's National Chess Champions, multiple SEA Games medalist and Olympic team member. "It is really amazing how young boys and girls learn the first rules of the game and then, as students of NYPS, grow from young disciples to young champions," declared Miss Liu, herself a former NYPS pupil. 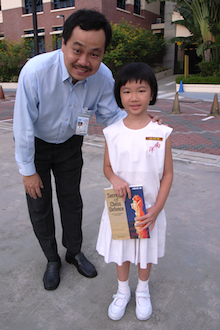 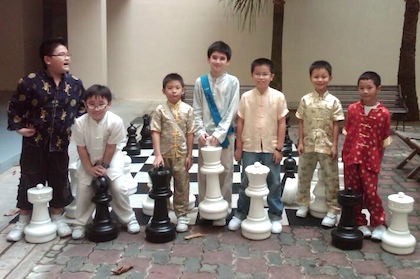 The management of the NYPS Chess Club is aided by a committee formed by pupils in order to get them involved in the weekly club business. A chess library was put together in the past year and chess books and software are regularly loaned to interested pupils.

At the end of 2009, the club started a match by correspondence against Yateley Manor School from England, a champion school team managed by International Master and renowned chess author Andrew Martin.

During the second term of each year, NYPS organizes the Nanyang Chess Challenge, a traditional tournament restricted only to Nanyang pupils who - through the stiff battles on the chessboards - decide their interior pecking order.

During this year, the club plans to release a bi-monthly newsletter focused on mind-sports (Chess, Weiqi and Xiangqi) drafted and edited entirely by Nanyang pupils. The overall mind-sports program enjoyed the great support of Mdm. Heng Boey Hong, former Nanyang Primary Principal. Mrs. Lee Hui Feng, the new Nanyang Principal, expressed an equal support for any tool that may aid the educational process and the school's global vision. 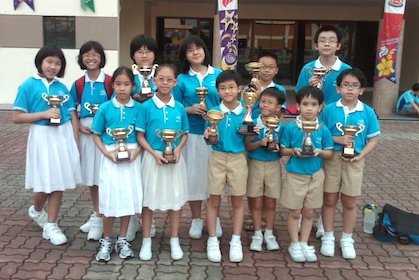 At the start of 2010, Nanyang chess faces a big challenge. Big but not new. It's in fact an old challenge, experienced at the start of each year. Some of its strongest chess players (like Yuan Wei Ting, multiple national champion at different age categories during her studying years in Nanyang) graduated. The waves of pupils coming from behind need to be inspired to push harder so to prove worthy to fill in the shoes of the graduating generation. Creating the link between the gifted P1 & P2 pupils and the more mature, much stronger, but ready-to-graduate P5 & P6 pupils is always a difficult but a necessary task. The long-term success of a school chess club depends on how this process is managed.

The best allies are not only financial grants, good trainers, flexible chess teaching programs and the support of the top school officials: they are also the pupils themselves. They must come together and fraternize not only as chess club members (fellow mind-sports fans wearing the same chess club blue t-shirt) but also as Nanyang pupils (united by a strong belief in Nanyang values & identity and the battle-cry Jiayou!) and as Singaporeans (when the school attire is set aside and they come united under the national flag when playing overseas). Only then such a strong bond between them is being built, regardless of their background, age, and strength, a true team identity is being crafted.

In September 2009, during the Nanyang Chess Challenge, the then-P1 twin sisters Sheryl-Lynn Tan and Shae-Lynn Tan were unable to attend the tournament. Victoria Fam (P5) and Phyllis Poh (P6), two elite Nanyang girl players, approached one of the teachers-in-charge and enquired why the twin sisters did not take part in the tournament.

When the teacher asked them why they would enquire about them in the first place during an individual tournament, the Nanyang girls said they missed the Tan sisters because they were adorable, very gifted and part of the Nanyang family. The game of chess helped these girls to come together as a team despite their age differences and various degrees of experience with the game. It helped build a small community in which its members care about each other.