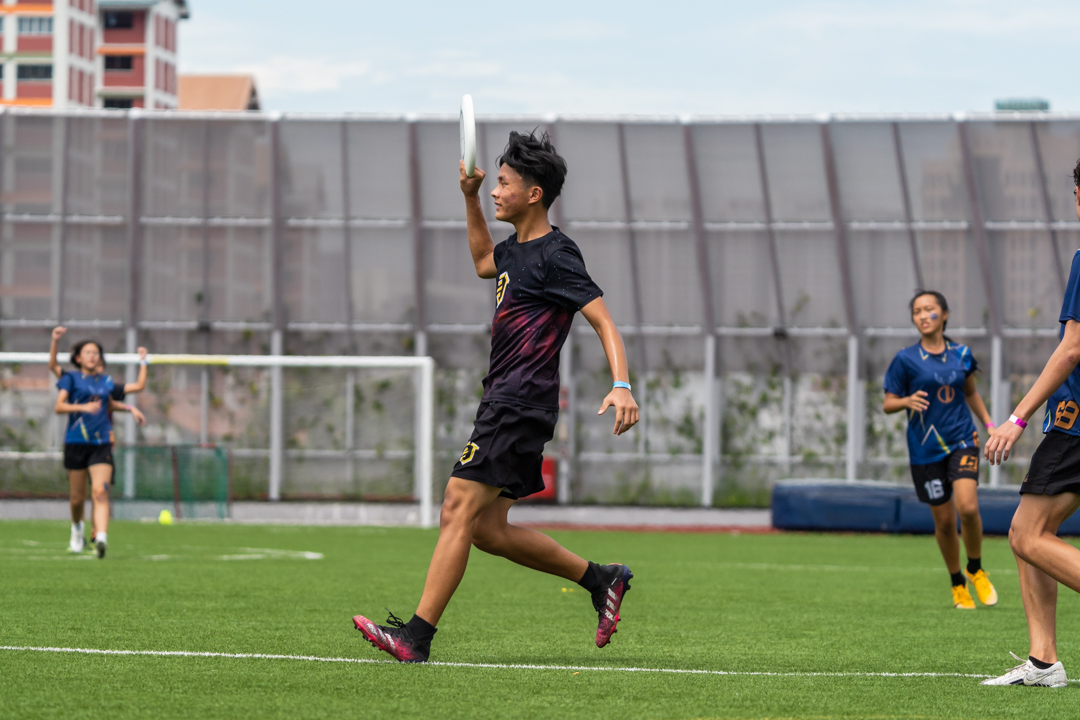 “I’m super, super proud of my team, we have trained so hard for this moment,” said Eunoia captain Jervis Soh (#25). “We have made history, and we hope that our future batches will continue our legacy.”

The two teams had met during the tournament’s group stage on 28th May, which EJC won 9-4. CJC was looking to turn it around for this rematch, which was also a historic occasion for the two teams – both were making their first-ever final appearance.

It was a significant moment for CJC captain Frida Nathania (#16), who, despite the loss, was proud of her team’s showing in the tournament.

“We just upgraded from a second CCA to a first CCA, so it was a big year for us,” she explained.

On their road to the final, EJC defeated Anderson-Serangoon Junior College in the quarters, then St. Andrew’s Junior College in the semis. Both games were tense encounters, finishing on 4-3 universe points. CJC, meanwhile, overcame Dunman High School 6-5 in their quarter-final before pulling off a huge 4-3 upset over perennially strong contenders Raffles Institution.

Like most of this year’s A Division competitors, training and bonding had been limited by Covid-19 Safe Management Measures. Additionally, the competition’s format was changed from 4v4 to 7v7 – but the teams were only informed of the change one month before the actual tournament.

“We had to quickly adjust to the new format, and we had to get used to playing with each other. It’s very different and it was quite difficult,” said Jervis (EJC #25).

Another challenge was posed by the day’s weather: the heavy morning rain, which had delayed the tournament’s start by an hour, persisted as a drizzle throughout the quarter-finals, bringing layout opportunities on the artificial turf, but also more handling errors.

It then cleared during the semis, but a bit too well – a complete absence of cloud cover meant that the sun was beating down on the players for the rest of the morning. Soaked, then roasted, and worn down from tough battles that had ended no more than 15 minutes prior, CJC and EJC took to the pitch for the final game of the 2022 Inter-JCs.

CJC pulled to start the game, and deployed a zone-and-cup defense strategy with a three-girl, four-boy combination.

Strong pressure from the CJC D-line caused EJC to go for an early-game huck, which was denied by a beautifully-timed sky from Noah Lee (CJC #6). The nimble handler had been playing out of his skin the entire tournament, pulling off the day’s only “Greatest” during his team’s semi-final defeat of RI. Unfortunately, Noah’s jump caused both his legs to cramp, and he was escorted off the field to be attended to by teammates and medics.

Iden Tan (CJC #69), already on the field, took over as a handler. On a break chance, he quickly went for a strike in front of teammate Ethan Neo (CJC #88), who dropped the disc. The EJC O-line, with possession close to their endzone, quickly capitalised on their offensive advantage and scored the first point of the game through Ethan Loh (EJC #10).

Fatigue was catching up with all of the CJC players, and with one of their star players gone, their opponents had an edge over them. The momentum swung, and Eunoia quickly scored another four points through quick strikes and opportunistic hucks. Scores from Isaac Chia (#2) and Bernice Tay (#18) were followed by a double by Mavis Goh (#19), making the score 5-0 to EJC.

It was at this point that Noah returned to the field for CJC, to the applause and cheers of all watching – including EJC players and spectators. He made an immediate impact on the CJ offense, throwing a classy forehand downfield to Ethan Neo (CJC #88), who skied Ashton Ng (EJC #28) for their first point of the final.

Asked to comment about his team’s performance in the game, Eunoia skipper Jervis was quick to acknowledge the hole that Noah had left in the CJ line.

“That’s what encouraged us to get the strong lead,” he said. “But then I think it’s really respectable that they actually still managed to pull through, and despite the guy being injured he still came back and played.”

Noah and Ethan were substituted out at the next point, in order to let them rest. The pair had been CJC’s main handlers for the entire morning, and had formed a good combination with teammate Iden (CJC #69) to help CJC through the tournament.

Fatigue was continuing to build in both teams, and the point stretched as the sides repeatedly turned over the disc. A well-deserved timeout was called, and afterward EJC managed to end the long point through Edison Tan (EJC #21). The score did not change for the rest of the first half, ending 6-1 to EJC.

The half-time break allowed the players to rest, but it was clear the day’s action caught up to them in the process. Both teams’ play became messy, and EJC’s momentum was subdued, to the benefit of CJC – but they could not muster the offensive stamina to close the five-point deficit.

“The tiredness affected us a lot, there was a lot of cramping and that kind of stuff. I guess that’s why we couldn’t give our best performance. But I think we’re still quite proud about it,” said CJC captain Frida.

Both teams played the second half differently — CJC’s O-line deployed a 2-handler, 5-cutter ratio, while the EJC D-line adopted a zone defense strategy. Offense was shaky for the two schools, though, and repeated turnovers again dragged the point.

The handlers on both sides were also trigger-happy with the hucks, but only EJC were able to convert them into points: Iden Tan (CJC #69) could not make the sky on an EJC backhand OI huck, and Wei Hong (EJC #14) picked it up behind him in the endzone. The score thus became 7-1 to EJC.

The hucking continued – and so did the turnovers. EJC nearly scored again through Deon Ang (EJC #15), but were called back for a foul by Noah. Ethan Neo and Iden then combined for a well-read D, and took advantage of the break, quickly scoring through Ian Aw (CJC #15) to bring the scores to 7-2.

Both teams’ error rates climbed as the game began to close out, missed catches and subpar throws making their tiredness apparent. Ethan Neo missed a huck to Iden, and EJC quickly moved the disc downfield from the turnover. A throw down the line was missed by Anoushka Jade Bhandari (CJC #39), but Edison (CJC #21) covered her to score the final point of the match.

Edison (CJC #21) credited his team’s chemistry for their offensive dominance in the final.

In closing, EJC captain Jervis said: “I want to say thank you to all the supporters, alumni, coach, for helping us throughout the two years. We really will never forget the experience that you gave us, and I feel that our juniors got this; they got it next year.”

In the third/fourth placing match, which was played concurrently with the final, St. Andrew’s Junior College beat Raffles Institution 8-4 to finish in third position.