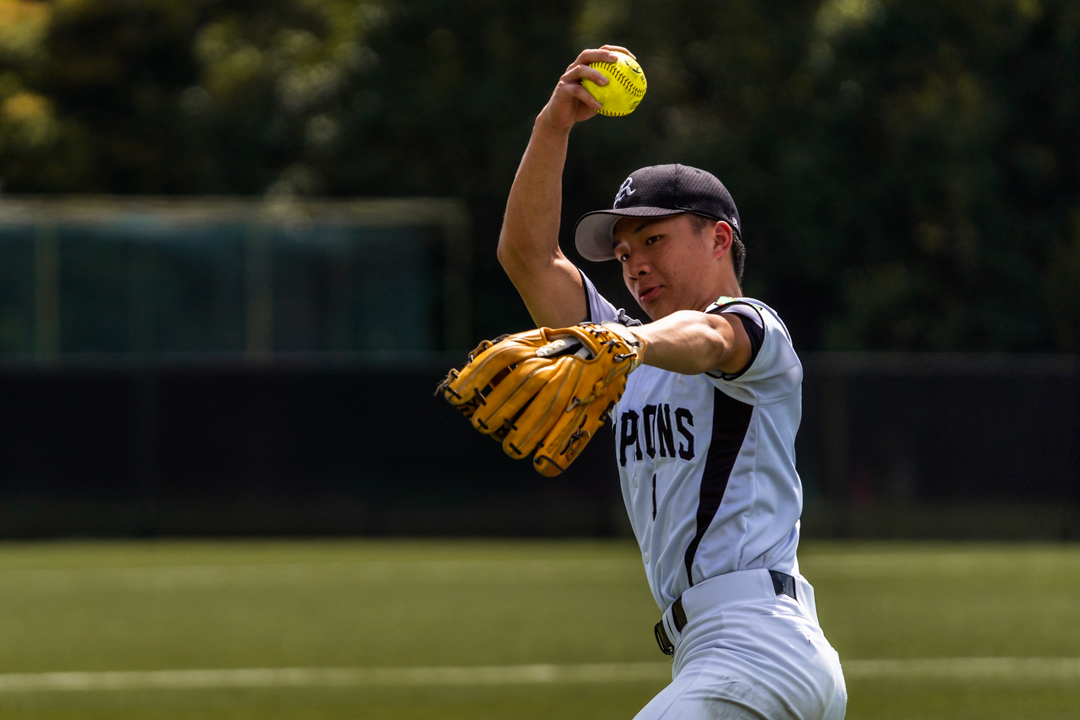 Raffles Institution, Thursday, May 26, 2022 — An impressive pitching performance by Raffles Institution captain Shawn Yip (RI #1) led his team to a 6-0 victory over Eunoia Junior College in the A Division boys’ softball final. Recording 13 strikeouts on the day, his performance, complemented by strong teamwork in defense, proved sufficient for the Rafflesians to claim their first title since 2017.

The pitcher attributed his team’s success to hard work, even though he felt that there was room for improvement in offense.

“At the end of the day it’s the victory with the team that matters, so I’m proud of them and I’m glad we won today,” he said.

At the top of the 1st, with Raffles batting, Shawn (RI #1) fought back from a 1-2 count to draw a walk off Eunoia pitcher Titus Tan (EJC #1). This walk proved to be instrumental to Raffles taking an early lead, with Shawn stealing second and scoring on a 1-out single through Nayan Chopra (RI #25).

However, Titus (EJC #1) was able to steady himself and earned two flyouts to get out of the inning with no further damage.

With Raffles leading 1-0 heading into the bottom, Shawn (RI #1) opened his pitching account by striking out Eunoia’s captain and leadoff hitter Gerard Lum (EJC #8). EJC catcher James Park (EJC #99) then reached base via a fielding error by Raffles shortstop Yu Zhe (RI #6) and promptly stole second. James (EJC #99) was left stranded on second, however, as Shawn (RI #1) rallied, striking out the next two batters.

The two teams traded zeros in the second inning. Titus (EJC #1) got two flyouts and a groundout, while Shawn (RI #1) struck out the first two Eunoia hitters before hitting Jotham Yeo (EJC #10) with a wild pitch.

Shawn recovered and struck out the next hitter, Jordan Lim (EJC #24), with three straight pitches to bring Raffles to the top of the 3rd with a 1-0 lead.

This inning would prove crucial for Eunoia, who needed to throw Shawn (RI #1) off his rhythm to regain the game’s momentum. Playing strong fundamental softball, they looked to be doing just that, getting a 6-3 ground-out from Shawn, who led off to start the inning.

Despite this, EJC stayed steady and got two more ground-outs to end the inning, highlighted by a fine play from Gerard Lum (EJC #8) at shortstop who ranged to his right and threw across his body to get the final out of the inning.

Eunoia headed to the bottom of the 3rd with the intention of taking back the lead from Raffles, pressuring the so-far implacable Shawn (RI #1) into giving three free passes and placing multiple runners in scoring position.

Momentum was seemingly in EJC’s favour, and the opportunity for taking back the lead had indeed presented itself. A high pickoff attempt by Raffles catcher Marvin (RI #20) went into left-field, and Gerard (EJC #8) took his chance to break for home and tie up the game.

But it was not to be — Raffles left-fielder Tao Kobayashi (RI #5) made a heads-up play to cover third on the throw from the catcher, then recovered the ball and made a strong throw home to nab Gerard (EJC #8) at home plate, getting the second out of the inning and taking the wind out of Eunoia’s sails.

Raffles were not completely out of the woods yet, however, as James (EJC #99) advanced to 3rd on the play, and through another hit-by-pitch by Shawn (RI #1), the same runners on 1 and 3 situation were set to play out again, albeit with two outs.

Shawn (RI #1), evidently inspired by the heroics of his teammates, settled down to strike Eunoia’s Pio Lee (EJC #6) out looking on three straight strikes, ending the inning.

The next batter hit a comebacker back to Titus (EJC #1), ending the inning for Raffles and bringing them to the bottom of the 4th with a 3-0 lead. Shawn (RI #1), still in a groove from the previous inning, struck out the side on 11 pitches, bringing the game to the fifth inning.

Raffles managed to get their first two batters on base via fielder error and a walk, and placed both of them in scoring position after a double steal. The runner on 3rd, Marvin (RI #20), scored on a pass ball by James (EJC #99), while the runner on 2nd, Nayan (RI #25), scored on a double by Evan (RI #12) later on in the inning, making the score 5-0 to Raffles.

Another fielding error on a comebacker to the pitcher allowed Tao (RI #5) to reach 1st safely and Evan (RI #12) to score, bringing the score to 6-0. Titus (EJC #1) gathered himself, getting a strikeout, and then a groundout to 2nd, to end the inning.

Eunoia, at bat in the bottom of the 5th, had one last chance to take the lead from Raffles. Shawn (RI #1), unwilling to relinquish this lead, struck out the side to claim gold for his school.

Raffles coach Farhan Harahap praised both schools for the match, saying: “Both sides played a really good game, especially at the start; it was fielded tightly, and it was good for us to get the early lead.”

Even though Raffles had been viewed as the favourites going into the final, Coach Harahap reminded his players to adopt an underdog mindset.

“In fact, EJ had better games against Hwa Chong and NJ than we had, much better games actually,” he said, referring to opponents Hwa Chong Institution and National Junior College. He added that even though there were games where both he and his charges felt they could have done much better, the final was the best game that his team had played all season.

The Eunoia squad were undaunted by the seemingly better-on-paper team fielded by Raffles.

“I think we came in with a lot of expectations and it was a very exhilarating match,” said Eunoia captain Gerard Lum.

“We came here wanting to win and knew we had a chance. At the end of the day, I think we still did a very good job, we put up a very good fight until the last inning, the last out — even if it didn’t go our way, I think we should be satisfied with how far we have come as a team,” he added.

Eunoia’s coach Samuel Lee concurred with his captain, stating that even when they were trailing, they still showed a resilient attitude throughout the game.

Reflecting on the season, he added: “The boys really did us proud, they were always looking forward to the end goal. Of course we fell short by one game, but they put up a fight against every single team, and I think they have nothing to be ashamed about.”